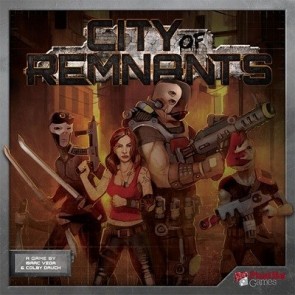 In Kansas City there’s a restaurant called Swagger, where you can order a sandwich called the “Dead Texan.” This is a burger with bacon, lettuce, mayo, all of the usual suspects. But wait, there’s more! It comes with a fried egg on it, evidently on the assumption that it really needed some more protein. And then, as a sort of practical joke, all of these things are put between not a bun, but two grilled cheese sandwiches. I tell you about this gastronomic monstrosity because this same “more is better” mindset was clearly at work with City of Remnants, the new game from Plaid Hat. The difference is that all of those disparate pieces fit together so smoothly and intuitively that you look back at the end and marvel at how effortless everything was. Trust me, not at all like the Dead Texan.

City of Remnants is a game about gang warfare set in space. Each player is a gang of alien toughs wrestling for the most renown in an alien city. You can recruit gang members, establish new developments within the city, and produce illegal goods in an effort to turn a profit. And of course you can (and will) pick fights with your rival gangs in an effort to get the best spots on the board. That’s the thematic description, of course. Mechanically, it’s all over the place. Your gang is represented by a deck of cards, and you add new members by auctioning off cards and adding them to your deck, so there’s your deckbuilding and auction components right there. You can set up little engines to keep producing and selling goods to keep the cash flowing. There’s a lot of positioning of units on the board to find the spots that give the most renown. And add to all of that that the four factions all have their own weaknesses and strengths, and you have a game that should be kind of a mess.

But City of Remnants is able to connect all of these mechanical components into its theme so effectively that the game never really feels complicated, even though it kind of is. It makes perfect sense that gang members would be auctioned, because different gangs are willing to pay different amounts for their services. And you need to keep pumping new members into your deck, since gang warfare is not what you’d call a long-term career. In short, it’s filled with mechanics but never feels mechanical. Designer Isaac Vega deserves some high fives for his work here. It flows so well that all of the rules eventually fade into the background and you can really get down to the business of controlling a city.

One of my favorite aspects of this design is how it allows you find strategy in its negative space. There are some spots in the rules that I assumed worked a certain way, when in fact I was taking a limited view on what was allowed. For example, at first when I built developments I put them on spaces where I already had units present. That meant I had to position my guys just so and then take another action to plunk a tile on top of them. It turns out that you can build a development anywhere on the board, even if there are no units present. This realization opened up some neat possibilities. Maybe you could build an enticing development between two rivals and let them get into a knife fight over it? Maybe a well-placed tile will persuade someone to leave you alone? It does a good job of just letting people play, even when a card or effect feels strong. It’s generally content to just let you deal with it.

This “deal with it” attitude can be seen in action when combat rolls around. Each round of combat, a player can play some cards from their hand to boost their attack and get some bonus effects. But those cards only last for one round, so if you need to go again you will need to play new cards. And you can’t reshuffle or draw new cards without taking an action to do so, so running out of cards is a big deal. Not only that, but if you lose a round of combat you don’t just lost your little plastic dude, you also trash a card from your deck. It’s a brutal consequence, and it pulls at the more aggressive players’ desire to get their hands dirty. You’ll need to fight some battles if just to defend your territory, but too many in a round can tap you out and make you a sitting duck for someone else. It’s a brutal way to do combat. There’s a lot at stake, and I love that.

I also love how the game handles asymmetry. Each player has a different starting deck of cards, but you recruit from the same deck. Each new recruit is affiliated with one of the four factions, but he can also be of varying use to the other three. So you might want to bid on one of yellow’s guys. Sometimes it’s worth it just to keep someone from getting a good card, and to give yourself cannon fodder for combat. The end result is a deck that still has the original flavor with which it started, but that takes on the qualities of rival gangs. It’s a more subtle form of asymmetry, obvious but not absolute. It reminds me a little of Chaos in the Old World, but this is far less tied to learning the specific player powers.

Luck has a definite say in how things go. You roll dice for combat, so a smaller force can defeat a bigger one now and then. There’s also patrols of the oppressor alien race that pop up every turn, and if you aren’t ready that can become a problem in a hurry. I don’t think either one of these is a problem at all, but some people I’ve played with have found it a little swingy for their tastes. I do think the game can drag a little at the beginning. My first four-player game went for three hours, which felt pretty long. My other games arrived at about 90-120 minutes, which lines up with what the box says. But in the early going there are a lot of card effects to digest, and bad play can sometimes make the game take longer than it would otherwise.

You’ll just have to power through that learning curve, because this is a deep, exciting, and vicious game. It’s mighty impressive how smooth it goes down, and how different every session has felt. It’s another home run for Plaid Hat, and it’s officially put Vega on my watch-list as a designer.