This Land is Your Land - Terra Mystica Review 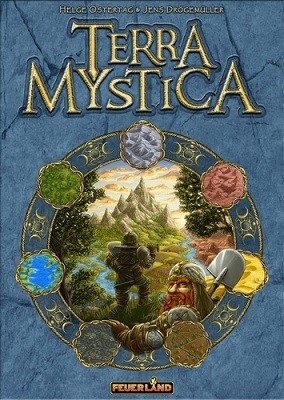 More than any game I’ve written about recently, Terra Mystica is hard to review. I find myself torn between actual enjoyment and the reviewer’s tendency to point out little things that are not to my taste. I don’t really like games like this as a rule. There’s only so much brain-burning for its own sake that I can handle before the game isn’t worth the effort anymore. But in a small way Terra Mystica has taken up residence in my head. After each session, we’ve had a fascinating conversation on strategy and what could be done differently, how the winner won and how the loser got buried. The design and strategy is compelling enough to overcome my own biases and leave me with an overall positive impression, though perhaps one of admiration rather than true enjoyment.

Terra Mystica is a resource-management game carried to its logical extreme. Each player takes one of fourteen factions and slowly builds a network of various buildings around the board. You can only build on a specific terrain, so you’ll need to transform what won’t work. You’ll do that with at least four different kinds of resources: gold, workers, power, and priests. You also will need to generate little shovel symbols to allow your faction to transform the terrain to something they can use. Over the course of six rounds, players take actions until they pass, and then you calculate some little bonuses and move to the next round. As you place specific buildings on the board, they generate different kinds of income. Larger buildings aren’t built on their own, but rather replace smaller ones. That means that upgrading to a bigger building will give you one kind of income while removing another. On top of all of this is a couple layers of bonus actions and special things you can do, as well as various alternate ways to generate points.

To get lost in the specifics would be to court madness, but perhaps the most impressive thing about Terra Mystica is how digestible it is. A big part of this is the graphic design, which of course makes heavy use of wordless iconography. I have a love-hate relationship with such heiroglyphs, but the execution here is actually quite good. Most impressive are the player boards, which remove all ambiguity about costs and income and presents all of the layers upon layers of options as clearly as possible. I had to explain the game a couple of times, and every time the players grasped the basics very quickly.

The fourteen factions are one of the defining characteristics here. It’s like the designers played Small World and liked the factions in that game and nothing else. I’m impressed by how different they all feel. With this many possibilities most games will settle for a few variations on different ideas and call it a day. These ones all feel distinct, and they provide one of the few spots of theme in an otherwise abstract game. Unfortunately this is a bit of false variety. There are a lot of different races to use, but each one must be played a certain way to succeed. There may be a lot of races, but each is relatively inflexible in what it needs to do. If you don’t know how to use your racial power well, you’ll certainly lose to the guy who does.

But suppose everyone knows what to do when? Then the strategy moves toward the board placement, the various bonuses that can be selected, what actions need to be taken when, and so forth. If that sounds like a headache, it kind of is. But it’s not necessarily a bad headache. There’s pleasure for me in seeing such a well-oiled machine function. Like most eurogames, one of its chief accomplishments is how well it operates. And as I said, lively discussion has taken place during and after every game, while people discuss moves and strategies.

So I very much admire Terra Mystica for its design and strategic space. But do I actually enjoy playing it? Well, sort of. It’s a very well-designed example of a genre that I don’t normally care for very much, but it’s good enough that I enjoy it in spite of myself. Make no mistake though, there is no hybrid design happening here. It is full-on engine-building and resource-collection, and it has all of the problems that comes from games like that. It’s easy to fall behind and be out of the game. There’s very little direct interaction. And perhaps fatally, it bogs down mercilessly in the last third while people do calculations and try to figure out how they can earn a couple of extra points. These are real problems for me, and I don’t want to make light of them at all. I know that people who already like this kind of game won’t mind. I used to be one of those people myself, so I understand it. Such problems, especially the drawn-out endgame, will improve with experience. But a lot of games are frankly not worth the effort to get to that point. Terra Mystica is, but only just.

The end result probably averages out to about “pretty good” for me, but it’s challenging enough that I won’t play it very often. I have too many other games that I love actively without toughing it out with this one. Does a game that I admire from afar still count as a good one? My gut tells me yes, especially because I know how much some people will enjoy it. I wouldn’t play it on a weekly basis, but I can see myself getting in on a game every six months or so for a long time. For me it’s a lot like a trip to an unfamiliar place. Nice place to visit, but I wouldn’t want to live there.