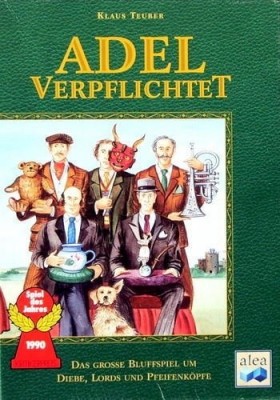 Klaus Teuber will always be best known for his greatest contribution to gaming, The Settlers of Catan. It makes sense, because pretty much everyone who’s in the hobby has owned a copy at some point, or has played one, or still owns it and hassles their families to try it out. It’s known as the first crossover hit in German board games, which is largely accurate. But before Catan was settled, Teuber’s first foray into the US market was a little double-guessing game called Adel Verpflichtet.

It’s been released in the United States at least twice, once in 1991 by Avalon Hill, and again in 2004 by Uberplay under the can-barely-say-it-with-a-straight-face name of Hoity Toity. The 2004 edition is the one I have, but neither version is still in print. It’s a shame, since it’s one of those games that is a genuine part of hobby gaming history. Not only that, but it’s fun too.

Everyone takes the role of a wealthy antique collector. Each round consists of two different secret choices. The first is whether you will go to the auction house to buy a new piece, or whether you will try to display your goods in a gallery and pick up some victory points. After players determine where they are going secretly, they all reveal their choices. Then comes the second secret choice, that of what role you will use in the location you chose. In the auction hall you can choose one of several money cards, though only the highest-valued one will get anything. You can also choose the thief to steal the card that buys the antique, but if there’s more than one thief, no one gets anything. In the gallery, players can choose to display a set of antiques, and the best sets get points. You can also use a thief here to steal antiques from other players, or a detective to throw the thieves in jail. The game goes until one of the scoring pawns reaches the end of the board, and the highest score wins.

It’s a very simple game. It mostly boils down to two double-guessing opportunities and a little bit of set collection in how you display your antiques. It feels perhaps too simple at intially. The first couple of choices will feel either obvious or arbitrary. But after a few rounds something starts to happen. Maybe it’s triggered by the first thief who gets thrown in jail, maybe it’s the first time someone’s all-important noh mask is stolen. Regardless, people eventually start trying to stay a step ahead of each other. It’s there that Adel Verplichtet begins to really show its quality.

Double-guessing is one of my very favorite game mechanics, because it’s such a good way to let a player outsmart themselves. You try to get so far into the other player’s head that you temporarily take leave of your senses and pick entirely the wrong thing. Usually double-guessing happens in a one-on-one situation, but in Adel Verplichtet it can happen between up to six players. It creates some genuinely bizarre moments, like when an entire table of people plays the same card several times in a row. I like it when everyone visits the auction hall, and all but one person plays a thief. It’s easy to think you’re being sneaky until everyone else tries to sneak in the exact same way. Likewise, it’s wonderful to bluff your way into some ill-gotten gains. Adel Verplichtet offers these moments over and over again.

It may seem like a one-note experience, and that’s not totally inaccurate. Like many German games, it’s made for ease and fun more than immersion and depth. But when the game lasts a mere 45 minutes it’s hard to complain much. Not only that, but the bluffing and guessing embraces what board games do best. It’s not a very narrative or thematic game. It simply does one thing really well, and it’s a uniquely board-game kind of thing. It’s the joy of looking someone in the eye and trying to get inside their head. And it’s the fun of the reveal, when you realize how right or wrong you really were.

I can only imagine what it felt like to American gamers in 1991. I know that a few German games (like Scotland Yard) had made it across the Atlantic during the 80s, but Adel Veplichtet follows a less orthodox structure. There are no turns. Everyone does everything at the same time, and you resolve all of the choices at once. It’s a common trick in game design today, but I think that it would have felt revolutionary to 1991 gamers.

Adel Verpflichtet content to be simple and accessible. In that sense, it’s no surprise that it’s fallen out of print once more. The game has aged very well and doesn’t feel long in the tooth at all, but it’s not the kind of design that gets a lot of attention anymore. Thankfully, it’s not yet one of those out-of-print games that is rare or expensive. You can track down a copy easily enough, and I recommend you do. It’s become something of a game night staple for me. I’ve been able to introduce it to parents, in-laws, and non-gamers and all have loved it. Hopefully it’ll make it back to store shelves someday, and more people can discover its charms.