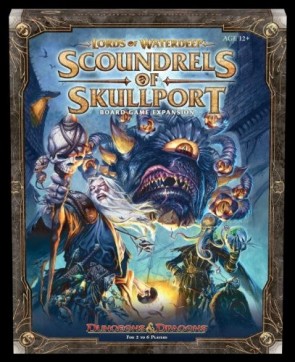 Game Name
Lords of Waterdeep: Scoundrels of Skullport
Publisher
Wizards of the Coast
Designer
There Will Be Games

Lords of Waterdeep was one of 2012's best games, and it did it by not doing anything too fancy. It valued straightforward rules and intuitive strategy over originality and cleverness, and it ended up becoming one of my favorite eurogames of the last few years. Since it was able to achieve so much by consolidating the strengths of its genre and executing those strengths impeccably, it’s fitting that the Scoundrels of Skullport expansion operates on much the same principle. Instead of introducing a slew of new mechanics and complications, it falls back on the core strengths of the original game, while introducing a ton of new content and one very well-executed new mechanic  so good, it feels like it always belonged in the game.

Scoundrels of Skullport, depending on how you want to count, is actually three expansions in one box. The first is Undermountain, an extra board that adds some new locations, along with new cards and buildings to flesh out that setting. The second is Skullport, which has its own board and new components, and also introduces the concept of corruption. Corruption is essentially a bad resource, one that you receive for taking some particularly strong actions. At the end of the game, each corruption point will dock you a few victory points depending on how many were taken throughout the game. The kinda-sorta third element is tokens for a sixth player, filling out the colors with gray.

Undermountain is the “basic” expansion, adding no new rules at all, That’s not really a big deal though, since it’s just fun to have new cards to use. The new quests in particular are game-changers, since there are now a few quests that are worth a whopping forty points. One of the strengths of the original game was a terrific balance between going for the easy gain now, or saving up and going for the big score down the line. Both worked well, and now that decision becomes even more compelling with the new quests. It also introduces some unconventional ways to score points, like buildings that give you points for returning adventurers to the board and Intrigue cards that let you give cubes to other players for points. Despite the fact that it has no new rules, it manages to change things up and open new strategies without throwing anything out of whack. That’s more than a lot of expansions can say.

The Skullport module is more drastic. Corruption shifts the decision-making from “now or later” to whether you should do something the easy way or the hard way. The actions that give you corruption are very strong, generally worth taking at least a few times. Not only that, but the new intrigue cards and quests will give you ways to get a windfall of goods for just a couple of corruption tokens. It’s mighty tempting to take on corruption if it means you’ll be saved a few actions. Corruption introduces a cool metagame as well. The more tokens in play, the more points they will be worth against you at the end. Of course, you can just agree to not take them, but if one guy is using them a lot, he’ll only be in trouble at the end of the game. Until then he’ll have way more than everyone else. There are ways to get rid of them as well, which does feed into that “now or later” decision. You can take one more corruption action now, but will you be able to get rid of it later on? I love the effect that Corruption has on the game. It’s very well-integrated, and really gives the decision-making process a little more color.

Both modules add something that was sorely missing in the original game: new Lord cards. In the original game, most of the Lord cards gave you points for completing specific types of quests, aside from one who got points for owning buildings. Now there is far more variety for people to pursue, which opens up the strategic space considerably and throws a lot of static into reading what other players are trying to accomplish.

You can play each module on its own, but I actually think that Scoundrels of Skullport is at its best when you combine both modules into one game. This requires the removal of some components from the base game, but it makes for a far more open and interesting experience. I was worried that it would water down both individual settings, which would have especially been a problem for Skullport. Happily, that ended up not being a big problem at all. Corruption still ebbs and flows as the game goes on. It actually makes it a little harder to get rid of corruption tokens, which only improves that element. The trade-off of the expanded game is that it’s definitely longer. It’s only really an issue if you have slow thinkers or are playing with five or six players. It’s actually the only way to play with a sixth person, so if that was the big selling point for you, be prepared to add another half hour to the game.

Scoundrels of Skullport’s best effect is that it removes the game from a situation where there aren’t enough actions to one where there aren’t enough pawns to do all you can. It’s a different kind of scarcity, one that doesn’t remove as many options from the players and gives you more ways to accomplish your goals. Thankfully, those goals haven’t been complicated much. You still want to get cubes to complete quests, and there are still a lot of ways to aggravate your opponents. It shifts the game without encumbering it.

If you already didn’t like Lords of Waterdeep, don’t expect Scoundrels of Skullport to change that. It’s the same basic game, and it’s only marginally less abstract than it was before. But it’s silly to expect an expansion to make you like a game you hated in the first place. This one is for the fans, and they will be more than pleased. I actually think it’s one of those really good expansions, the kind that you can purchase with the base game and teach to new players right away. It completes the original game, and it does it without a lot of fuss. That’s precisely the expansion that Lords of Waterdeep deserved.