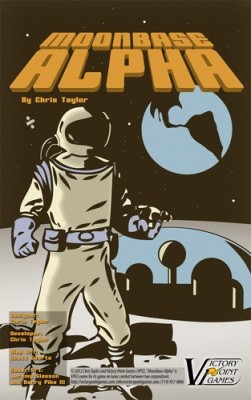 People love strategy and decisions, but they present a real danger of making a game more trouble than it’s worth. I’ve been generally positive on Victory Point Games, whose small-box games have covered an enormous breadth of topics and mechanics. Moonbase Alpha had all the earmarks of something I would like, from a cool 1970s sci-fi theme to dice-based combat. And yet in practice it was irritating and overwrought. It  complicates things it doesn’t need to and presents strategic opportunities I didn’t really need.

Moonbase Alpha is a two-player light wargame where each side is a corporation mining the moon for precious materials. Each player is trying to make the other side take enough losses to drive down the stock price of their rivals. Alternately, you can also drive up your own stock price by paying out some money or successfully researching new technology. Different spots on the board make it easier for you to research that technology, or provide income for purchasing new units. The game is over when one side reaches a high enough stock price, which wins them the game. Alternately, they can force their opponent’s stock to bottom out so that they can buy up the shares and take over their company. There’s also a turn marker that acts as a timer of sorts. If it runs out, the player with the highest stock price wins.

There are the bones here of something solid. One thing I really like is the simplicity of getting a set amount of income each turn, and not allowing players to bank it for later. It cuts down on administration and makes decisions much easier when purchasing units. I’m also fascinated by tying success to something that isn’t actually about holding territory. It’s not really about maintaining certain spots on the board. Even though you will need those locations to increase income and make it easier to research technology, you don’t win by conquering specific locations. It’s more about inflicting losses on your opponent and forcing down their stock price.

Unfortunately, it also results in a disconnect between what happens on the map and victory. I didn’t feel a lot of push to go for specific locations, so much as I just wanted to wreck up the place. The design of the map doesn’t do the game any favors, because it’s  basically just a shot of the lunar surface that’s been divided into arbitrary chunks. There are differences between the locations, but those differences are rendered entirely in small icons with no other visual cues. You can tell why things are important, but the game doesn’t give any sense of shape or territory. It’s just a step above a flat grid, sterile and uninspiring.

The drab map also impedes movement itself, since there are several modifiers that dictate how far a unit can move. Only certain icons affect movement, but all are rendered in small black squares that blend together. Not only that, but the presence of enemy troops also complicates things, since it costs more movement points to move next to or into enemy territories. It forces you to plan and account for such things, which is a friendly way of saying it makes the game slower.

The mechanical meat of the game is the order system, where players alternate placing order tokens face-down on the board. Three of these tokens are real orders that will resolve in a specific sequence, and the last is a bluff token to fake out your opponent. The idea here is that your opponent will see where you’ve placed the token, but they won’t know the order in which things are resolving, or even if it’s a real order. There are clearly a lot of strategic possibilities here,  but for me it ended up being a little too easy to outsmart myself. It was hard to not broadcast what I was doing, even assuming one of the orders is a decoy. I don’t want to ding the game too much for this, because a lot of people will relish this decision. But for me the payoff wasn’t worth the effort.

In good old-school wargame fashion, ranged combat is resolved by rolling fistfulls of dice. That sounds a lot better than it is, because even though Moonbase Alpha has dice-based combat it doesn’t execute it very well. The attacker rolls the dice, adds the total of their troops, and consults a table for how that will affect the defenders. The defenders then each roll an armor save to see if that result takes place, or whether they get a somewhat better version of it.

The big issue here is that it’s just too darn hard to destroy units. You essentially need a huge pile of troops that will take several turns to assemble, which is a little tricky with a stacking limit of six units.  Our rolls have often resulted in the defending units being suppressed or forced to retreat, but still surviving and having no effect on anyone’s stock price. If you roll bad enough, it slows the game to a crawl.

And that’s really the biggest issue I have with Moonbase Alpha. The roll of the dice dictates not swings of luck, but the actual pace of the game. If you roll poorly in combat, stock prices aren’t affected. If you can’t successfully roll to get good technology, you are stuck with inferior units, which means combat is tougher still. It’s almost like it’s afraid of letting the dice result in true failure. The game is advanced mostly through good results, and bad results mostly maintain the status quo or give minimal punishments. That’s a big issue when the turn track is about 6-8 spaces too long. There are ways for players to affect their own stock price and the turn order track by spending some income, but it’s just one more thing that pulls the point of the game away from what’s happening on the map.

The rules aren’t much help at all, which has been a persistent issue with Victory Point. Part of me wants to cut them some slack since they’re a small operation, but it’s especially egregious here. They have since gone back and released an updated version of the rules, but these were not in the copy I played, and I had to track them down on my own. They include some options in combat that actually shouldn’t be in there, and they left out a very important aspect, that of bounding fire. This is a way to move and attack in the same action, and missing it slows the game down even more.

No doubt a lot of my issues will go away with experience, which is a little like saying the smell isn’t so bad once you get used to it. The initial experience was unpleasant enough that I’m not interested in getting to that point. Victory Point is generally a very reliable company, but Moonbase Alpha is a rare misstep, a game that is less a pastime and more a chore.