Glamazons vs The Curse of the Chainmail Bikini Review 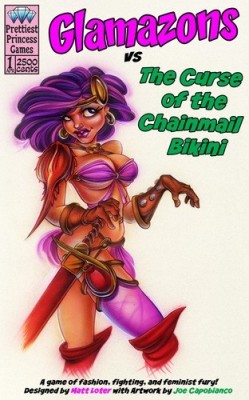 Disclaimer - Matt Loter, the designer of Glamazons vs The Curse of the Chainmail Bikini (referred to as "Glamazons" from here on out) is one of my closest friends. That being said, I'm the first to let him know when he's done something I disapprove of, usually accompanied with what some would call "colorful" language. Oh, such wonderfully foul, colorful language. In short, despite our relationship, it's well within my nature to be brutally honest, and I think you're stupid if you even had the slightest notion of me being biased.  Suck it.

Scantily clad women. They can be pretty awesome. But let's face, if you're a girl in the fantasy genre about to do some adventuring, the standard wares down at the blacksmith ain't gonna cut it. Too often do we see a girl who's supposedly dressed for battle, but her outfit screams to every monster in the realm, "Hope you don't stab me anywhere but in the nipple!" Glamazons is a game about a group of adventuring gals who want to right that wrong DIY style, by killing monsters and using their hides to forge some proper gear themselves! The bummer is that combat is a messy affair, and each monster can only yield one piece of armor, so the girls need to work out who did the most damage and therefore claim their rightful spoils. Whether or not they're being honest is a different story...
Glamazons is a bluffing game, pure and simple. The game accomplishes a rare feat of trimming all away the excess you find in other games and gets right down the bare essentials of the mechanic, playing to its strengths all throughout play. You draw a card telling you who you'll be fighting the monster with (in a fairly genius Cosmic Encounter sort of way), that player puts a card (numbered between 1 and 8) face down on the table and tries to sell you on it being what they say it is. You can either challenge them on it or put down a card of your own. They can either let it ride or challenge you. If nothing is challenged, the player who claimed to have the higher number wins the armor. If a card is challenged, it's revealed. If they're caught bluffing, their opponent wins. If they were telling the truth, they win. The winner of a challenge gets to steal a piece of armor from the other player, so if you're going to challenge, you'd best be ready to have the stakes raised.The rules are certainly solid, but they come off as being a loose framework that are there to facilitate social situations rather than a procedure. This is a game where people and personalities are what drives gameplay while rules do the wonderful thing of slipping into the background. They're there, you're aware of them, but you're not thinking about them. This is Glamazon's greatest strength, and while it seems so simple, we don't see that happen in the hobby often enough.I guess my previous statement about Glamazons being a bluffing game isn't completely fair. It's a "people" game. It's the kind of game that will have a completely different vibe if you're playing with close friends or complete strangers. In an age of so many board games not only being translated to digital platforms, but playing better digitally than on the table, playing something that is IMPOSSIBLE other than face to face is a breath of fresh air.