Board Game Review - Rise of the Zombies 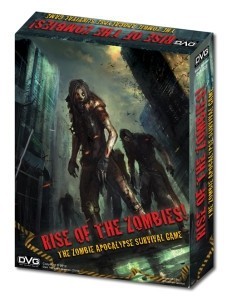 What you really need to enjoy this Halloween is a game that will terrify you, one that will make you want to scream in terror because it will be so terrible. Actually, wait, that is not what you need. I just checked, and you just need like, candy or something.

It turns out you do not need to be terrified by a terrible game of terror. And that means you can take a great big pass on Rise of the Zombies, because while it does have a creepy story - the zombie apocalypse - the only thing scary about this game is that you might play it. Hell, at this point, is anyone still scared of zombies? Zombies have joined vampires in being so overused that they are bordering on harmless. Watch, by 2015, we will have sparkly zombies.

Not harmless, however, is Rise of the Zombies, because it will ruin a perfectly good night. This is a game where you and the other survivors will try to run from one side of town to the other to get on the helicopter, which is a concept that dates back to one of the first zombie games, one that was zombie when zombie wasn't cool (it was called Zombies). It (Zombies) was almost insultingly bad, and had three exclamation marks in the title, but it did come with a whole bunch of plastic zombies, and it was cheap.

Rise of the Zombies, by comparison, does not come with plastic zombies. It comes with poorly drawn line art of zombies on cards with no color on them, and a bunch of standup pieces of cardboard that represent the various survivors who must be wedged into little plastic holders to represent your location on the board, which is not actually a board because it is just a bunch of cards with ugly pictures of abandoned playgrounds and empty parking lots.

The idea behind Rise of the Zombies is that you have to manage your hand of cards and cooperate with your friends to shake your zombie tail ('tail,' in this instance, meaning that you need to lose a pursuer, as opposed to having the game tell you to dance like Miley Cyrus, but with a dead butt). Unfortunately, managing your cards means you have to look at them, and then your eyes will hurt.

Rise of the Zombies shows almost nothing interesting in game design. You move to a new location, and to see what's there, you draw a card. Then you draw some cards to see what zombies are there. Then you draw some cards because if you don't, you won't ever have any guns. You might have a dog, though he will probably be killed by zombies. When one of your friends moves, you can discard a card to follow him, which is a good idea because you probably don't want to be stuck in the boondocks with the umpty-bazillion zombies that just appeared out of nowhere like Freddy Krueger coming out of the bathwater.

The scariest thing about Rise of the Zombies is that someone might actually play it. I would complain about it being too hard or too easy or too light on story or whatever, but the thing is, I don't care, because that's not why I don't want to play this game again. I don't want to play this game again because it is arbitrary, unpleasant, and unprofessionally ugly. It amazes me that an actual publisher of actual games is willing to put actual money into this actual monstrosity, and not pay for art.

But then, maybe Rise of the Zombies was only made because the publisher was scared. Maybe what is scary to a publisher is the idea that they won't be able to have a zombie game on the market, and everyone will point and laugh, like you did to that one guy when he came to your costume party dressed as Sailor Moon, and nobody else wore costumes. You don't want to stand out, do you? Better have a zombie game, or you won't be allowed at the cool kid party! All the cool kids are making zombie games!

I'm getting kind of tired of Monster Month. It seems to just be zombie month, and I am tired of zombies. I want zombies done right. I want excitement and fun and a chance to prove to my opponent that I am much smarter than he is. I would be delighted if there was some kind of deeper message or greater point, but these are board games, not Oxford dissertations, so I'm willing to accept it if you just want to settle for fun. Unfortunately, Rise of the Zombies has none of those things, and is butt-ugly, to boot.