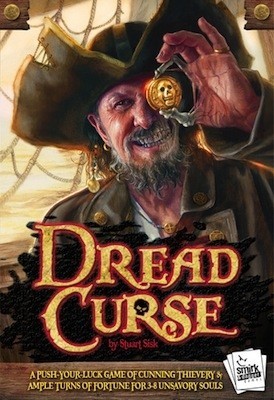 If a game of high stakes and bloody retribution ye be wantin’, then look ye no further than that fair maiden of the oily abyss, Dread Curse. It be a pirate game of swipin’ booty and death hexes signed onto ye by the devilish voodoo queens and women whose mothers gave them ridiculous fake African names like L-a (pronounced ‘Ledasha’) and Demonica (these are real examples of real people with real names).

Settle down your boggy britches to the splintery tavern bench and sort out your coins, then toss those golden doubloons into a leather bag sewn from the hides of angry bush squirrels (editor’s note: the bag is actually just fabric, and nobody but an idiot would mistake the bag for squirrel hide). Pick yer jobs with care, then, mateys, for the task ye perform fer the crew of this leaky tub of well-groomed goat-beards may well decide yer fate and the fate of yer blarmy shipmates!

Be ye the captain, and it’s first ye be drawin’ from yon bag made of squirrel’s arse. Fret not, though – ye don’t actually have to put yer hand in a squirrel’s arse. In a pinch, ye can use a bag made out of something else, like bits of the mainsail or the underpinnings of an accomodatin’ tavern wench who you left in her altogethers after a night of rum and Rohypnol.

Any-bewitchin’-way, the cap’n draws the most coins, an’ the first mate be drawin’ one less than the cap’n. Then other sailors take their fair share from the arse-bag, all the way down to the cabin boy who doesn’t get to draw at all, just steal a coin from the cap’n because cabin boys are rotten little squibbies who take yer spot at the lunch table and then spread rumors about how you were kissing Ralphie Mayweather behind the gym, only that never happened, and it was Ralphie’s idea, not mine, and he gave me a dollar.

Just because ye draw coins, don’t mean yer done, ye mangy sea lemurs. Now ye must steal from the others, going in turn to take a hard-fought golden coin from the filthy paws of yer fellow seaworthy cutthroats. Once again, just like before, the cap’n leads the way and the rest follow, until we get back to the cabin boy… and because he’s a rotten little poopie-head, nobody can steal from the cabin boy.

Plucking coins from a squirrel’s arse-bag and swiping them from yer piratey shipmates is all manner of exciting and all, but it would leave ye a wee bit befuddled as to the point of playin’ Dread Curse but for one thing – the black spot. As every buccaneer of the Seven Seas can tell ye, the black spot is the worst of the curses a pirate can bear. If holdin’ the black spot ye are, then all must knows ye have been marked for death, or for getting sand in the sweatiest spot in your underwear and then being forced to walk around all day until your buttcheeks look like your drawers were made out of sandpaper. Oh, and if ye hold the black spot when the game be over, ye walk the plank and die! Or you just lose.

To make matter just a wee bit worse (or a big whale of a lot worse, depending on how ye look at it), every pirate has his own particular skill that he can use to his own ends. The cap’n, for instance, steals extra coins, but the first mate can be givin’ his coins to the other rogues as he sees fit – a fine way to be certain ye lose that horrible black spot, and hand it off to the louse-ridden cabin boy. And then, when all seems to be as convoluted and desperate as the maze of Charybdis (editor’s note: Charybdis’s maze is the seldom studied maze where the mythical Greek apple-hunter Peckerhedis got lost and wound up falling into such a deep sleep that he wet himself and was very embarrassed when he finally met the princess), Dread Curse adds in the cards of the pirate’s code.

If ever a lower form of scum-dwelling bilge-rat ever existed than these accursed cards, it were probably that thrice-damned cabin boy. For the cards in Dread Curse allow you to cause all manner of mischief and hijinks upon the persons of your fellow shipmates, and they will be greatly furious when ye block their attempts to get off the ship, or when ye steal the coins they gave to the ship’s monkey. The varied roles and these foul-demon cards make for a game so unpredictable and hilariously fun that ye may find yerself cursing those other funk-brothers even as ye ask them all to stay and play again.

One crucial point I be missing so far, and it be so important that ye be greatly daft should ye ignore it – you change roles every turn. Aye, each time the turn doth end, every player shows his best coins, and the brigand with the best show becomes the cap’n for that turn! Each of the others chooses an assignment in turn, each to the order of his coin display, and so there oft be some contention for the second spot, for the first mate be able to hand off his cursed coin and tell someone else, ‘dost thou suck it!’

Dread Curse be a mighty pile of fun and cutthroat hilarity, such that I felt the need to write all these paragraphs like a hackneyed jackanapes pretending to be a pirate. Yet it must be said – the game is a sight more entertaining with a crew of five or six than it is with three. Gather ye a crew of eight for an epic game of backstabbery and mirth! Still ye can play with but three, but ’tis a different game indeed, one of careful and shrewd manipulation, more than one of mean spirits and randomly unpleasant surprises.

And now, as I close this log recording my thoughts on the good-natured, mean-spirited Dread Curse, I must needs make a promise to all who read these voluminous meanderings – I won’t never write another review pretending to be a pirate, or may the curse of the black spot wind up on the back of my hand and make it really hard for me to get work outside the public sector. I did it but this once, and shall not repeat.

Pros:
Cutthroat game of careful timing and bald-faced luck
Lots of opportunities to cuss your friends, and for them to cuss you
Really nice art, and the pieces are high-quality