A Once and Future Rumble - Duel of Ages II Review 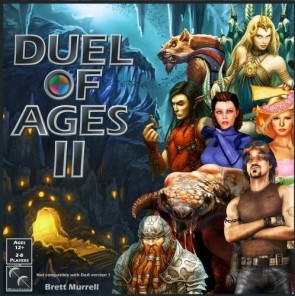 The first iteration of Duel of Ages came out ten years ago, but it’s follow-up feels like something much older. I don’t mean that in a dismissive way at all, but rather that the game eschews a lot of design trends and so-called advances from the last 15 years or so in favor of something elemental and pure. It’s a little like playing an old-school video game that bypasses all influences in the 3D age and instead steals from every game of the SNES era. I suppose Duel of Ages II will confound a lot of contemporary gamers, but it would be their loss. It’s one of the best games of the year, and it has the feel of something that will stay with me my whole life.

Imagine that a bunch of famous people from the past and future were thrown into an arena with fantastical beings, aliens, and fictional characters. These players are divided into two teams and they adventure all over the map trying to gain achievements, which shift based on the scenario. Your team might consist of Genghis Kahn, a scorpion monster, and Baba Yaga, or any number of other characters. The board is made up of different terrains, and there are places where you can be transported to different times and worlds to pass a test to get rewards. There are also bases for each team where you can capture opponents, or maybe you’d rather storm the other guys’ base and destroy something. Characters accumulate items that run the gamut of weapons, armor, and knick-knacks from across the different worlds of the game. You could end up with a crossbow, a laser rifle, or lawn darts. The central mechanic is the challenge system, where a character compares their stat with that of another character or a certain level on the adventure. A card is flipped, and the difference between the two stats determines the result. This represents perhaps the biggest mechanic change from the original Duel of Ages, which used dice and a combat results table for all of its challenges.

The sheer scope of Duel of Ages has to be seen to be believed. There are 192 characters, 32 map “platters”, a few hundred items, and no doubt untold millions of possible interactions and variations. Unsurprisingly this comes with a pretty substantial rulebook to digest, but it’s actually not as bad as it looks. First of all, the rulebook that comes with the game has some great learning scenarios that lay out combat and adventuring, and you can then move on to the big stuff. Once one person knows how to play everything, it’s not a big stretch to explain the game. And for those who really need all their questions answered, there’s a Master Rulebook online that should be updated regularly.

It may be s a little intimidating up front, but the payoff is one of the richest games I’ve ever played. It’s like everything and nothing I’ve ever seen. I see influences from Cosmic Encounter, hex-and-counter wargames, roleplaying games, and if I squint I can see stuff like Talisman and Titan in there too. And yet, if you tried to relate it directly to any one of those games the comparison breaks down almost immediately. It has some nuanced rules for combat and terrain effects, but it’s not really a game about fighting. It has adventuring, but that implies it doesn’t have a solid tactical core. I guess I might describe it as a “tactical experience” game, since it definitely does have that feeling of a huge event, but one where placement and good choices can be just as important as good old dumb luck.

Over the course of the game, a little narrative begins to form. Each character on the board has their own story that is woven into the game. In my last game, Baron Von Krule the supervillain had a faithful hound who protected him from melee attacks. After the duo was attacked by a dwarven warrior, the dog jumped into the fray only to be struck down by the dwarf’s bare hands. Or how about the time Bill Hickok was trying to bring a gift of kittens to the referee/goddess of the duel (long story), until a hacker unleashed a wild puma on him? Those were both things that happened organically just in the flow of the game, without any flavor text or card instructions. Of course, those elements are there too and work marvelously, like when Blackbeard narrowly won a wrestling match with Hercules. It was only because Hercules had the trots, but a win’s a win I guess. It’s an enormous tactical free-for-all with spectacular narrative detail, like a game of capture-the-flag with time travel.

One of the special joys Duel of Ages provides is that of true team play. You can play with two players, but it requires a fair bit of upkeep to juggle your whole team, since even the smallest scenario has six characters per side. Better to divide the characters between a few teammates, which gives a lot of the personal investment and emotional engagement. It’s an effortless way to play, entirely organic to how the game is designed. There aren’t any cumbersome rules for how partners must communicate or exchange information.

I have never played the original Duel of Ages, but it definitely had a vocal following. It sold through a core set and eight or so expansions before winding down. Duel of Ages II isn’t a sequel, but rather a second edition. Not only did it overhaul the challenges, but it pared down the rules weight drastically and smoothed out a lot of rough edges. Those I know who played the original assure me that this is definitely a more streamlined experience, though it could hardly be called lean. There’s an insane amount of content available right out of the gate, divided between a Core Set and a massive Master Set. There’s still the same basic amount of components as there was in the first edition, but they’re in two hefty boxes now. Both sets together will set you back $180, which will undoubtedly dampen a lot of enthusiasm. As crazy as it sounds, I actually think this is a good deal. That’s because I just like the game a lot, but it’s also a lot cheaper than it would be to buy a base game and eight expansions. I wholeheartedly recommend buying the whole shebang if you can, but just the Core Set would give you plenty to do and will give you a full game experience. It’s true that 75% of the game’s content is in the Master Set, but it’s almost all just more of stuff that’s in the core set.

Duel of Ages II is a delightful game, a sprawling, insane joy. I can only think of two games that have brought me so much unmitigated enjoyment, and those are Cosmic Encounter and Talisman. There’s a switch in my head that goes off when I think about it, and I immediately am happy that I’m in this hobby. It’s a labor of love, with so much character and passion in its design that it makes me thankful I have a lifetime to spend with it.