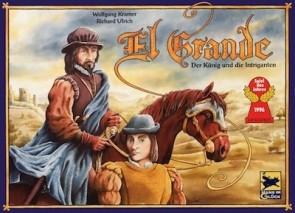 One of the most unfortunate tendencies when discussing board games on the internet is the way games are described solely through their mechanics. It’s like someone asking how dinner was, and being given a list of ingredients as a response. Such a description is technically accurate, but falls short of giving any actual information. Any game is greater (or less) than the sum of its parts. It’s not the individual pieces that determine how a game functions, but rather how they synchronize with each other when combined with human opponents.

Few games show that disparity quite like El Grande, the classic award-winning design from Wolfgang Kramer and Richard Ulrich. It uses what most people would call “area control,” a term that is applied to so many different situations that it’s lost a lot of its meaning. Besides that it looks dour and severe in that stereotypical Eurogame fashion. It features piles of cubes on a map with several shades of brown. You could be forgiven for thinking it was a cold distant efficiency game, but thankfully that isn’t the case. It’s actually kind of a dudes-on-a-map game re-imagined for the German market, and it’s pretty darn nasty.

Actually I don’t know for sure if it was meant to be some kind of re-imagining of the dudes-on-a-map genre, the style of game best exemplified by classics like Risk. It does look the part, since it has a map and bunches of “units” all over the place. But in a very German way, there isn’t any actual combat. Players co-exist with each other all over the place. Instead there are simply points scored for the players who have the most in each region during one of the three scoring rounds. Using a kinda-sorta auction, each player selects an action card each turn. That card will let them shuffle things around on the board and to add new cubes. New cubes can only be added to a region that borders the one containing the king, but the king’s region is totally off-limits. The strongest move is often moving the king to an advantageous spot, one that will allow you to put guys where you like but prevent your opponents from messing with your territories. The result is a game where no shots of fired, as it were, but where you can directly mess with the plans of your opponents.

More than most games, it feels like every move counts in El Grande. There’s very little of the throat-clearing that you sometimes get in big conflict games, which sometimes are slow to heat up. But even as each turn is important, they aren’t so important that you cannot recover from a mistake. One El Grande’s key features is its volatility. Since each player is making an important move in every turn, the board state is in constant flux. A player who jumps to an early lead can easily be hit hard in the late game, and someone who hasn’t been a threat for most of the game can suddenly make a push to victory. In my experience it’s usually a matter of staying right in the middle of everything. You wouldn’t want to fall too far behind, but neither do you want a target on your back.

This dynamic style of play is something that sets El Grande apart from many of its area-control descendents, or indeed from other Eurogames in general. It’s not a game about manipulating a system the best. Nor is it a race to the finish line, where you must outperform the other players instead of directly hurting them. The challenge is entirely wrapped up in what everyone else is doing. There are times when the best move isn’t obvious, and you can simply throw the entire board into disarray. For something that looks so stodgy, El Grande has a little chaos in its blood.

It also has that terrific mid-1990s German feel that makes it obvious why Germany became such a force in the world of boardgames. Everything feels very intentional and in its place, never more complicated than it needs to be, and over in a clean 90 minutes. It was so successful that it won the coveted Spiel des Jahres, the most prestigious German gaming award. In hindsight, it’s kind of an unusual pick. It’s a little weightier than that award usually skews, though it’s hardly what could  be called heavy. But then it was a time before the SdJ broke so heavily from the hobbyist wing in Eurogame design. It doesn’t really matter why it won anyway, because it certainly deserves all of the accolades its received. It even spawned a couple of expansions, unplayed by me but available in the most recent English edition.

To me the interesting thing about El Grande is how it expresses its theme, that of Spanish nobles fighting for control of Spain. The cliche about Eurogames is that they can be highly abstracted affairs, and that’s not far off the mark  here. You’ll notice that I described the player pieces as cubes, and not as “caballeros”, their name within the context of the game. The action cards don’t tie to anything specific beyond broad concepts like “decay of authority” and “intrigue”. But the back-and-forth nature of the game does recall the chaos of a nation in transition, where the balance of power shifts constantly.  The way that conflict works in the game is also oddly thematic. You have to coexist, and so you must find other ways to take care of your opponents. Nobility will always make nice,  but don’t let the smiles fool you. They’re out for blood.

As with a lot of older games, El Grande doesn’t see as much action as it used to. It’s actually out of print for the moment, a casualty of Hans im Gluck’s change in US distributors. I doubt it’ll stay there for too long, but in the meantime copies are still common enough in the wild that you can find one without much trouble. I definitely recommend you do so, because while it’s the kind of game that may not be played more than once or twice a year, it’s definitely the kind that we’ll still be playing for years to come.