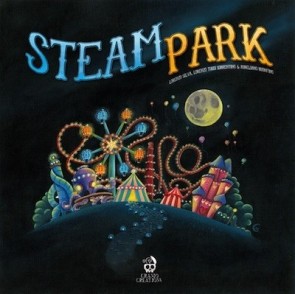 For a member of the “gaming press” I’m not particularly good at keeping up with all of the buzz that comes out of the Spiel in Essen. It’s one of the biggest gaming events of the year, but most of what gets released is totally outside of my knowledge. I’m not sure if Steam Park was some hotly anticipated game or a dark horse that no one knew about before. But I do think that it might turn some heads and become something that people talk about now that it’s out. It’s an unexpectedly fun game, one that leavens its family leanings with some good old fashioned silliness without sacrificing decision-making. As such it will satisfy a broad range of people. And at the risk of making it sound trite, it’s a pretty cute game too.

Certainly the theme of the game is one I haven’t seen before. Off the top of my head I can’t think of any other games about building theme parks, and I definitely can’t think of any where that theme park is being built for steam-powered robots. But that’s what we have here, a game where you build rides and stands to accommodate your robot patrons. Each round begins with dice-rolling to determine what actions you’ll take this turn. Players all roll their dice simultaneously, setting aside dice to save them and rerolling the others. There’s no limit to how many times you roll and you’re never required to set a die aside, but finishing first means you will get to go earlier in the round. There are four turn-order cards that players grab as they finish, Galaxy Trucker-style. Going first is a big deal, not only because it’s nice to get first crack at building the very limited rides, but because going earlier lets you clean up the dirt created by your park. Of course, going last means you produce some extra dirt, which won’t help business. Then it’s just a matter of resolving the actions you rolled in player older, which will allow you to build stuff, clean up the park, attract new visitors, and play bonus cards. Visitors mean money, and most money wins after six turns.

Steam Park pulls two really fun mechanical tricks. The first is the simultaneous dice-rolling. The ability to pick first and remove some dirt is huge, so it’s tempting to just chuck the dice once or twice and grab the turn order marker. The wrinkle here is that the dice all have one black face that’s almost totally useless. If you roll a bunch of those right away (a gift I have cultivated) you’ll want to reroll those dice post-haste. The other temptation is to roll until you get exactly what you want, or close enough anyway. That’s not a bad move all the time either, though I think it might be a sucker bet in the early game. Whichever way you go, it’s a really fun and frantic decision that always interests me. The whole rolling experience happens fast, faster than I am ever able to prepare for. There’s a tendency to make split-second decisions in the heat of the moment that you’ll then need to interpret when you’re resolving the actions. At least that’s a tendency of mine. Suffice to say that dice-rolling Nate and action-taking Nate are not always on the same page.

The other great mechanic at work here is how you attract visitors to your park, which is done with a particular die roll. There are six different colors of robots, and each will only ride something of its own color. One robo-meeple of each color is thrown into a bag at the beginning. When you roll the visitor result on the die you pick more robo-meeples from the supply, one of your choice for each result. Obviously you’ll want colors you can use in your park, but it’s not that simple. You then toss the chosen meeples into the bag and draw out the appropriate number. If they match something you have, great. If not they go back in the supply and you don’t get anything. At first I couldn’t quite place where I had seen this before, but I then realized that it actually reminded me of the terrific cube tower from Wallenstein. The best you can do is stack the odds in your favor. After that there are no guarantees. I’m sure some people will complain about the luck here, but I’m equally sure those people are whiners.

Of course there are placement limitations on your park, where rides of the same color must touch each other, but cannot touch anything else. The same goes for stands, which cannot bump against any other type but must be next to their own. You’ll need to expand your park to make room for everything. The stands each have their own little power, all of which are extremely useful. I seriously doubt you could win without them. Then there’s the ever-present specter of dirt, produced by some die rolls and by all of your visitors, in addition to going last. It piles up in a hurry, and though there are a couple of ways to get rid of it they all rely on rolling the right thing. Any dirt you have at the end will incur a hefty fine from the Robot EPA, and having enough will make you lose automatically. All of these different pieces click together in such a satisfying way. Steam Park is a great family game, one that takes a laid-back approach to the development genre and lasts exactly as long as it should.

A couple of items keep it from getting my absolute highest recommendation. One is that I wish there was a way to tussle with the other players a little more, since it’s hard to catch someone who has jumped way ahead.  I also wish that Marie Cardouat’s terrific illustrations were used more extensively, especially on the rather unadorned cards. But those are really my only gripes, and neither one is a huge problem. Steam Park is an unexpected pleasure, one of those wonderful little games that is neither threatening nor bland, but is entirely fun. Even with some exciting mechanical flourishes, it has the good sense to not get complicated or fussy. It’s a light family game done right.