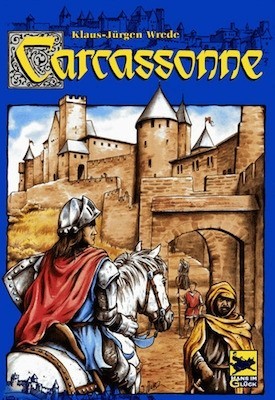 I’ve been active in this hobby for about seven years, and most of my favorite games are associated strongly with a particular place or experience. Maybe it’s a particular session I had that forever changed my opinion of the game, which is what happened with Manila. It might be a game that I loved above all others for an extended period of time, like Battlestar Galactica. And some games, like The Settlers of Catan, have all of those things wrapped up into one. But Carcassonne is unique in the sense that it reminds me of a particular person: my wife.

It was on our first date where she asked me about what kinds of hobbies I had, and I mentioned that I liked to play a lot of board games. Assuming she wouldn’t have heard of anything I liked I didn’t elaborate, but then she mentioned a game she had learned while she taught English in Korea, a game with castles and tiles and little wooden guys. She was of course talking about Carcassonne, her favorite game. I already had a copy at that point, and though we have played many times with our friends, it’s been years since we played it with anyone besides each other. Every couple of months we get it off the shelf and play a round. Usually she wins. I like to think it’s because I love her enough to let her win, but really it’s just because she’s better at it than I am.

Carcassonne used to be one of those games that every new gamer bought. I don’t know anyone who got into board gaming who didn’t own a copy at some point. When I got involved in the hobby, it was part of a three-way tie with Settlers of Catan and Ticket to Ride as the go-to game for new gamers. Like most of the truly huge hits of the hobby market, it installed a very intuitive layer onto a familiar core, in this case domino games. Place a tile on the board so that it matches up with what’s already out there, and eventually you end up with little castles, roads, and monasteries. Each player has a pile of little wooden guys that sit on the board and only come back  to the player when the formation they are camped on is completed. So if you complete the city, you score points for the finished city and free up one of your pieces. Of course, it’s possible that two different features will combine into one, in which case the color with the most little guys (forever known as “meeples”) scores the points. You can also plunk down guys permanently to score points at the end of the game as farmers.

In its most basic form, Carcassonne was never more than a trifle to me, though to be sure a pleasant trifle. While it’s possible to intercept points from another player it took some set up to combine two of your own cities with one of another player to give you a two-on-one advantage. Most people seemed content to just tie and allow both players to get the points. It’s no wonder that it won the coveted Spiel des Jahres, since it is definitely a good German-style family game. It’s a good thing it won, because that guaranteed that Carcassonne would be expanded to within an inch of its life, and well beyond if you ask some people. My wife and I play with Inns & Cathedrals and Traders & Builders, which is just about the perfect mix for us. I never did much like the tile distribution in the original game, which I felt was heavy on roads and light on cities. There are a couple of new ways to score points and to increase the stakes a little too, which gives the game a bigger since of risk and relative drama. My favorite addition is a big meeple that makes it easier to steal points from the other players. There’s even pieces for a sixth player if your favorite thing about games is waiting for your turn.

I have a lot less experience with the expansions past that, but they are all over the map. Princess & the Dragon lets you eat other players’ guys. The Tower lets you throw them in prison. And The Catapult comes with (wait for it) a little catapult that lets you launch cardboard pieces on the board. I wouldn’t recommend playing with all of the expansion rules at the same time, though it’s something I’d like to try once. I’m hard-pressed to think of another game where all of the different expansions not only change the original game so drastically, but do so in such enormously different ways. It’s surprisingly easy to create exactly the Carcassonne game you want. If you want lots of nasty interaction where meeples are constantly getting destroyed and captured, you can make that version. If you want the higher-risk scoring opportunities, you can build that game. And if you want a version where you launch tokens at the board to knock over other pieces, then Carcassonne is the kind of game that is willing to oblige you. There’s even a whole realm of mini-expansions that I haven’t messed with at all, but they’re there if you want them.

Really it’s almost quaint by today’s standards. I have trouble envisioning this game getting made in 2014. It would be more complex and less random. Indeed between the expansions and house rules almost no one plays it in its original form that I know of. The base game is simple enough that there always seems to be some variant at work. We allow players to draw their tile at the end of their turn so they have a whole round to see where they want to place it. We also use an alternate scoring for the farmers, more reflective of the German version than the Rio Grande edition that we have. There are a whopping 25 pages of variants on the BGG forums as well. Like most of the great games, it’s survived because it can be adapted into what people need and want. That extends to electronic versions, whether its on XBox, Android, or iOS. Its longevity is assured because of its simplicity and malleability.

In a vacuum it’s still mostly just pleasant to me. But of course we don’t play games in a vacuum. Board gaming is first and foremost an emotional endeavor, something we do because it makes us happy. Carcassonne reminds me of my early days in the hobby, a time when everything about board gaming felt new and exciting. It reminds me of games with my friends on hardwood floors. And most of all, it reminds me of my wife and the kind of games she likes, casual and friendly. It’s never leaving my collection, not just because it’s her favorite game, but because it’s so much more than just a game. It’s part of our story together, which is something that precious few games can achieve.