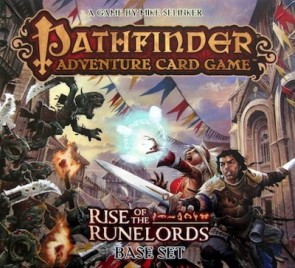 We’re living in an age of core sets, and core sets are brutally difficult to review. By necessity they are a stripped down form of the game that will look entirely different in a year. Game reviews are therefore forced to either judge a game entirely on potential, or on what does or doesn’t work at the ground floor. By any reasonable measure, I’ve played enough games of the Pathfinder Adventure Card Game to produce a solid review. But at this point there is way more content for the game than I have explored, and a fair bit more than I have even had a chance to play. My feelings on the game itself are mostly solidified, but still it’s hard for me to regard it as much more than an incomplete.

It’s definitely a positive incomplete grade though. It’s the sort of game that  has to be assessed on two levels, because that’s how it functions. The first level is the individual sessions, a straightforward affair that pushes abstractions to its limit without sacrificing some serious flavor. If that was all there was I’d rate it as a pretty good adventure card game and not much more. But that’s not really how Pathfinder was meant to be played. The idea of the second level is that each player takes on a certain character who is represented by a deck of cards, and that character stays with you for each scenario. New cards (representing abilities and items) get added to the deck during each adventure, and then you pick which cards stay and which ones go. The result is a game that would be mostly a trifle in a single session, but that comes to life when played over a series of scenarios.

Based on the Pathfinder RPG system, the Adventure Card Game sees players take on different scenarios to corner a big bad villain. Each scenario uses a certain number of location cards, each of which have their own decks. The players go adventuring at those sites, cycling through those decks and conquering monsters and grabbing items until they find either the villain or a henchman. If you defeat them, you have the opportunity of closing the location to give your team one fewer spot to worry about. The villain will try to escape to open locations when you find him, so the object is to get him in a situation where he can’t get away to another spot. Everything is resolved through a system of checks, which will force different characters to roll against their stats. Better stats roll a bigger die, so each character has what they’re good at. They also have powers that are associated with their character. In spite of a somewhat verbose rulebook, a single session of Pathfinder is very straightforward. There aren’t a lot of rules to internalize, and most turns boil down to flipping a card and rolling a die to see what happens. There are cards in each character deck that allow players to affect rolls, but since each deck also represents the character’s life you don’t want to burn through them too fast.

It’s a pleasant enough experience, but that’s about it. The game is heavily abstracted and doesn’t really congeal into a full narrative experience at all. So if that was all there was to Pathfinder, it would be nice but forgettable. But after the scenario you go through each character deck and rebuild each one based on a strict series of parameters. Let’s say a character is only permitted to have two spells, but throughout the course of the game they gained two more. Now you have to choose which two spells stay in the deck. This sounds simple, but different scenarios will require different compositions. It’s not quite as easy as it looks. And that’s just if you get to the end, whether you win or not. Actually winning a scenario gives you an extra reward, including buffs to stats that you already have. There are little checkboxes on the character cards if you want to write on them, or you could do what I did and use sleeves and a Sharpie. This continuity is frankly a revelation. It seems like an obvious advance, but no one has ever put it together quite like this.

It’s obvious that the Pathfinder Adventure Card Game was never intended to be a one-off. It takes one of the defining qualities of a roleplaying game, that of a persistent character, and makes that the entire point of it. Mechanically it’s a little like the world’s longest deckbuilding game, played over dozens of sessions. As the game goes on you become invested in your character, and it’s a big commitment. The base-game comes with a small three-scenario cycle and the first of six “Adventure Decks,” packs of cards each containing new cards of each type and another cycle of scenarios. All of this is wrapped up in a story called Rise of the Runelords. But don’t look now, because a totally new cycle is starting this summer.

Needless to say this is a big financial investment, though to their credit the publisher is up-front about that fact. They have removed some of the barriers to serial purchases too, by adding a subscription plan that will send you each new Adventure Deck on a bimonthly basis. You can spend money without trying! It’s not cheap or anything, but groups that meet regularly will eat it up. If you’re like me and you have trouble getting the same group of people together more than once, the game actually plays really well as a solitaire game. I run three characters simultaneously and it’s been great. And thankfully there are enough cards that even if you don’t feel like diving in it’s easy enough to reset and start over and get a completely different set of circumstances. Replayability is high for just being a basic set.

My only misgiving is how this game will look after I’ve been playing it for a few months, or even if it gets that far with me. The scenarios aren’t super-difficult, but it feels like success mostly hinges on how easily you track down the villain, and that’s mostly a crapshoot. In a 60-minute game it’s not a big deal, and I’ve found myself getting more success as my adventures progress. It’s still not a very deep or engaging experience by itself, at least not yet. That’s not really a fair way to assess the game, because the whole point is playing a lot of scenarios in a row. If you aren’t building your characters, you pretty much aren’t playing. I do think a simple game was the right choice for this design, because when the whole point is to progress it makes no sense to throw roadblocks in the way of that. But that also means that it might end up being a game only for casual people, and mostly a novelty for experienced gamers. Even at eight games, it’s still too early for me to tell what its longevity will be. My hunch is that it will hold up, at least for the Rise of the Runelords cycle, but who knows?

This might sound strange, but the Pathfinder Adventure Card Game reminds me of nothing more than Dominion. Both take very high-commitment genres and reduce them to a single mechanical trick. Dominion did it with CCGs, making deckbuilding the whole point of everything. Pathfinder does a similar trick with RPGs, making it entirely about character advancement. It’s the kind of game that sounds almost primitive. It hits one element in such a insanely addictive way that it’s hard to not be enamored of it. Even if it ends up only sticking with me for a short time, it will have been a pretty fun ride until then.