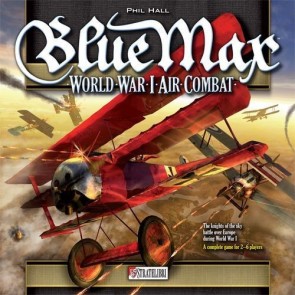 The highest military order of merit one could be awarded in the Imperial German military had a strangely French name. The Pour le Merite was to be granted to individuals strictly in recognition of extraordinary personal achievement.

The men called it the Blue Max. 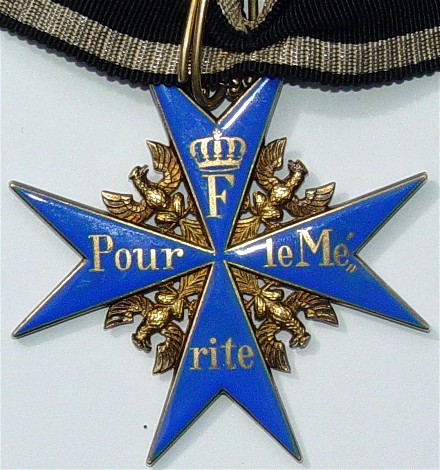 In 1983 I was 15 years old and I have a distinct memory of a snowy day in the middle of a Connecticut winter. There was no school and I was at my best friend Curt's house. On his expansive dining room table we had set up a copy of GDW's game of "Dogfights over France". That paper map became the sky and those cardboard chits became our machines as we spent that entire day in life or death struggles in the air.

I suppose it was Ace of Aces that had led us to it. That book game, acquired at the local hobby store then known as The Train Exchange, had given us hours of enjoyment the previous summer when we had spent two weeks at boyscout camp. This game promised to be all the fun of that game and more...and it was. There are few games that I remember as fondly as this.

So it was not without a sense of nostalgia driven excitement that I heard of the new edition being released by Stratelibri (distributed by Fantasy Flight).  Excitement but also trepidation. Would the game hold up or would it be old and outdated? Would the memory be better than the reality?

There was only one way to find out.

The first thing that struck me was the components. As I mentioned, the original game had a paper map and chits that, even though they had unique paint jobs of the planes they represented, were really quite small. Not so here. The map is a fully mounted double sided map. One side has a bird's eye view of the French landscape circa 1917 while the other has the traditional sky blue. The hexagonal tokens that represent the aircraft are large and have a side view and model name of the aircraft as well as the pilot associated with it purely for information's sake on one side while the other is the for function and has a top down view of the plane with the numbers and facing letters needed to play the game.

There are cards for each of the planes as well. Each with an image that reflects the unique paint job of the aircraft it's associated with. One side listing data such as the date when it was introduced into service, top speed, weight, armament and other things. All for flavor and coolness. The other side of the card depicts the plane with numbers showing how much damage various areas of the plane can absorb, fuel capacity, stability rating and maximum altitude. 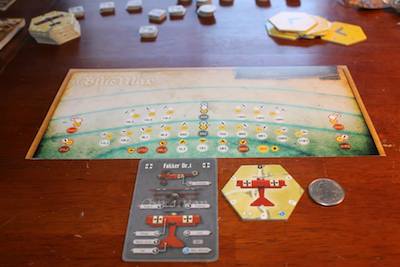 Yes all that is well and good but how does it play?

The basics of the game are simple and can be explained in a few minutes. Each plane has it's own maneuver chart which shows the moves the plane can make and which way it's facing when it's done. All players simultaneously and secretly choose what their plane will do and then all moves are resolved at the same time. After all movement is done, if there is an enemy within range of your guns you can shoot at and hopefully destroy him.

Of course it does because it's the very same system used in some of the most popular games at the present time. Star Wars: X-Wing, Star Trek Attack Wing and Sails of Glory  are all the children of Blue Max. The natural comparison, though, will be to Wings of War due to the theme.

They are similar and that can't be denied. You might say to yourself "Why would I want to play with cardboard tokens when I can play pretty much the same game with super awesome minis?" 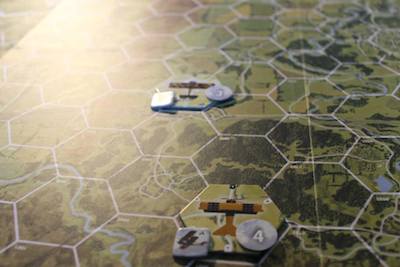 Well there are some differences and they are important.

One of the big changes when the system progressed from Wings of War to X-wing/Attack Wing was the elimination of the 3-maneuver per planning step idea and reverting to the immediacy of one maneuver at a time via the dials.

Blue Max was that way from the start. It does require the use of pen and paper to write down what you wish to do. One maneuver at a time. Some might find this to be laughably outdated but I think I prefer it to the card selection in Wings of War and because you are choosing a maneuver off of a chart, the variety of potential actions is much greater than X-wing's dials would allow if only out of space/font size requirements. 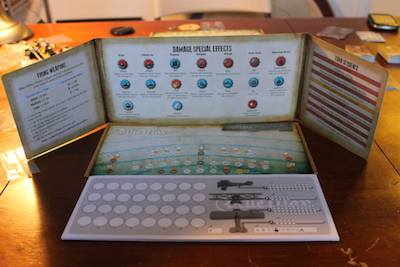 Another difference is the combat system. There are dice in Blue Max. Custom dice that have blank sides, blue sides and red sides.  When you take a shot you start with two dice and depending on certain factors like range, length of the burst of gunfire, speed of your last maneuver and several other things  you add or subtract die to a minimum of 0 or a maximum of 6. You then roll these dice and each colored face that comes up is a hit. The enemy draws one card for each hit off one of  several decks depending on which side of the token the fire came from (Fire that comes from behind is more likely to damage the tail, from the front the engine). Each damage card has a red half and a blue half and the damage taken is indicated by the color of the die result. (Red is worse than blue).

I like dice and I think it's a bit more thrilling than the card pulls in Wings of War.

Another big difference is in the "optional rules". I put that in quotes because even in the brief time I have owned the game, I wouldn't dream of playing Blue Max without them.

Elevation rules have been the bane of table top airplane games for as long as there have been such things. Blue Max has a simple yet effective system that while it may not be a precise simulation is also not a burden to implement. Thus keeping a player immersed in the game.

Fuel Capacity is the other optional rule. It differentiates the planes in a huge way. Yes the DR1 is the most agile plane in the game so why would you want to fly any other? Well because it's got a teeny tiny fuel tank and all those nifty turns and flips will drink all your fuel much faster than you would want while that slower lumbering Neuport just goes on flying and flying and flying.

There is also a subtle difference of tone between the two games. Blue Max is more brutal than Wings of War. For instance, when taking damage in Wings of War I often get the feeling that it's an all or nothing affair. I take a point here or there but I really have to be shot a lot before those one or two points add up to enough to take down my plane. That is unless I draw the Ka-boom card of instant death regardless of previous damage. If you take a long burst at short range in Blue Max it's going to hurt unless the hand of God comes down to alter the dice roll. Your wings are going to be shot to pieces, your engine might catch fire, your tail might be shot off. Maybe you'll be left with enough plane to fly but don't count on it.

Aerial collisions are also much less forgiving. Rather than the "Pardon me sir, our bases have touched," politeness of Wings of War, in Blue Max you can end up smashing in to your foe...or your ally...and end up killing you both.

Run out of gas? You die. Try the Tom Cruise "I'll pull the air brakes and he'll fly right on by" Top Gun trick? Maybe your plane stalls completely and you go into an uncontrollable spin...and you die. Get on somebody's tail for the killing shot and maybe your machine gun jams...for good! Now you're nothing but a target.

Now this comparison isn't all one sided. Wings of War is a great game. I like it a lot. And it has those minis! Those glorious fantastic models of the planes where Blue Max has tokens, nice tokens but tokens none the less. I like those models. No! I LOVE those models.

Of course those are double edged. Blue Max cost me $35 and comes with 18 planes. 18 planes for Wings of War is going to cost you a bit more than that.

Also the sheer number of different planes produced for Wings of War is far greater than is in Blue Max. It comes with 18 planes, yes, but only six different types of planes. In a perfect world Blue Max would be wildly popular and they'd produce packages of many other planes but we don't live in a perfect world and I really am not holding my breath for that to happen.

If we leave Wings of War behind and carry our comparison over to X Wing/Attack Wing certainly Blue Max suffers from the lack of scenarios and the there being no ability to customize your plane/ship. A DR1 is going to fly the same regardless if the pilot is Manfred Von Richthofen or Fritz von Schleppingheim.

So is Blue Max worth getting?

Oh heck yes. The last time I played we were shouting and cheering and groaning as the battle between three Sopwith Triplanes and three DR1's teetered back and forth. Things looked good for my side until that scoundrel Jim was able to extinguish the fire that had nearly ended him and put a lucky burst into my friend Billy Zavos and sent the Canadian Ace crashing to earth.

Any game that can have six grown men on the edge of their seats holding their breath as one prepares to throw the dice that will cause elation or despair is a damn good game.