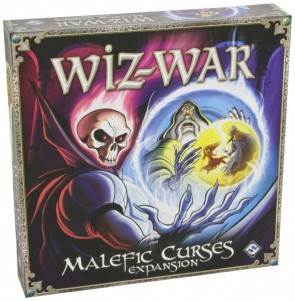 Wiz-War makes me angry. I get angry when I have the wrong cards, when the dice fall wrong, when the wrong people gang up on me. But that’s good anger. The bad anger is all the years I spent not playing this great game while it was out of print, until Fantasy Flight picked up the license for an eight edition. Now, in true Fantasy Flight style, there’s an expansion: Malefic Curses.

The box contains a board and pieces for a fifth player and three new schools of magic. A lot of people have been waiting for this largely for that fifth participant, but I’m not one of them. Wiz-War is a pretty chaotic game, and works best when clipping along at a premium pace. Five, I think, is too many. The additional interaction is fun, of course, but it’s not enough to compensate for the extra downtime.

Still, the fact that the new board is purple is a bonus since it now means no-one has to play the urine yellow mage from the base game when you’re playing with four. So it’s not all bad.

I was waiting for this mainly for the three new schools of magic: Hexcraft, Chaos and Necromancy. Because what I want most of all in Wiz-War is what every other Wiz-War fan wants. I want creatures. Minions. Foul magical constructs I can summon and send forth to do my bidding. The creatures promised in future expansions by the rules in the base game.

Sadly Fantasy Flight didn’t get the memo. Because there are no minions. Not even in Necromancy which is an opportunity so wasted as to be borderline criminal in my opinion.

So if there’s no minions, what is there in the Necromancy school? A surprising amount of attack spells, that’s what. More attack spells is obviously a good thing to keep the game flowing, as well as helping players like me who don’t prefer to use one big card stack to tailor hyper-aggressive decks to their liking.

However these Necromantic attacks, in common with the more defensive cards in the school, tend to also offer the caster a bit of life in return. That offers some quite superb gloating opportunities but it also prolongs proceedings by making it that little bit harder to kill players off. There are some nice flavourful utility cards too, such as the skull servant that acts as a line of sight beacon and the trap-like Boneyard. So it’s a fun school, if a slightly mixed bag.

Speaking of traps, the next new school in the expansion is Hexcraft which, in spite of the fancy-sounding name, is effectively all about traps. On paper, having a bunch of cards that leave dangerous markers all over the board sounds a bit dull. In practice, however, it’s probably the single best thing in this box.

Most hexes have a new range icon that mean they can be cast into any square on the same board as the caster, which makes them very flexible. And given the number of narrow turns and dead ends in Wiz-War, this adaptability makes it incredibly easy to trap enemy wizards into positions where they have to risk crossing the hex and triggering whatever delightfully devious attack it holds for them. It’s like sealing someone behind a wall, only more flexible and more fun. Hexcraft will be going into my decks a lot.

Both the preceding schools bring another new innovation to the game, called Flash Energy. These are in place of normal energy cards and serve an identical function, except they can only be used to power spells and not movement. While this reduces your tactical options, which is bad, it does mean more energy gets used for spells, which is good. Without Flash Energy, most Energy tends to go to movement and the many timer-based spells tend to get neglected. Flash Energy gives them a new lease of life.

The third and final new school is Chaos. As if there wasn’t enough chaos in Wiz-War already. Unsurprisingly, a lot of the cards in the chaos school are dice dependent. The less obvious candidates include things like defence cards that then teleport the caster away in a random direction. At the other end of the spectrum are attack and utility cards where the effect is determined entirely by a dice roll, often including one result that backfires on the caster.

The problem arises when you cram all these random spells into a relatively small deck. Even the energy cards in the Chaos school are based on the value of a dice roll, so it becomes slightly overwhelming when it’s fully a third of the cards you’re drawing out. Chaos works well when it’s used with the full deck variant, but less so with the original rules as written.

Surprisingly, none of the cards in the expansion are from previous editions of the game, although apparently Tom Joly had an editorial hand in deciding which made the cut. Makes you wonder what else FFG has planned.

And that’s your lot. Nothing game-changing that will win this divisive title new fans, but plenty for the existing fanbase to enjoy. It’s just a shame about the creatures. If I were at once to be cynical yet hopeful, I might suggest FFG is planning a creature-based expansion last, adding monsters to all the schools to try and get players to collect the whole set of expansions. But for now, we’ll have to make do with the dubious joys of Hexcraft.