Tales of Wonder - Tales of the Arabian Nights Review 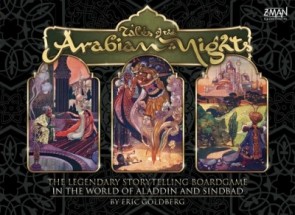 I still can’t believe that Z-Man’s reprint of Tales of the Arabian Nights had any impact at all. There’s a market for even the dodgiest games, but this one runs counter to just about every trend I had seen in gaming. It’s far too random to approach anything like strategy, and it makes a mockery of player choice. It’s key mechanic involves passing a huge book around the table while you look up numbers on charts to see what paragraph you have to read. It resembles nothing so much as the world’s most expensive Choose-Your-Own-Adventure book. How could such a game become anything besides an admirable failure?

As with all such things, I can only answer for myself. It’s not as if everyone loves Tales of the Arabian Nights anyway. It’s harshest critics have accused it of barely being a game at all. That sounds like a pretty narrow definition of “game” to me, but I sort of see their point. The players all travel around the board, the center of their own tale set in the world of Aladdin and Ali Baba. You land on a location, you draw a card, and it gives a number. From there you need to roll a die and consult a chart which tells you what you encounter, and you must then choose what to do from a list of matrices that present different choices in different situations. So you may choose to “Capture” the Magical Beast, and you then roll another die to see precisely what paragraph you must read in the Book of Tales. From there it’s just a matter of reading what happened, and collecting your reward. It sounds complicated, but the entire process of looking up a number and reading a paragraph is about 90% of the rules, and that’s handled by a couple of players at any given time.

The Book of Tales has to be one of the most striking things I’ve seen in a board game. It’s a huge spiral-bound book that contains hundreds of paragraphs and charts for every encounter in the game. I couldn’t begin to imagine the process of putting such a thing together. I’ve thumbed through it a little (but not too much!) to see if I can assess how it’s organized, but I’ve never been able to figure it out. What I enjoy most about the Book is how old-fashioned it feels. Surely if this game was designed in 2014, all of those paragraphs would be on a huge deck of cards. That might have been a little cheaper to produce, but then part of what makes Tales of the Arabian Nights fun is passing around that tome and reading the overwrought narration is dramatic voices. It feels like an artifact, a signpost that shows what an old game it is.

For that matter, Z-Man did very little to soften the throwback feeling of the original game. There are a couple of elements that feel like they were grandfathered from the older edition without really considering how they might work in practice. Why do you only transition to a new part of the day when you go through the encounter deck? I’ve never gone through that deck in the five years I’ve been playing. Another bit that doesn’t quite function is the secret goal for story and destiny points, which ends up being a good way to make the game take forever. I drop both of these rules when I play, transitioning the time of day every round around the table and simply triggering the end of the game at a certain total of story/destiny points. It’s a simple enough game that it can adapt to such changes with barely any impact at all.

But is it “barely a game?” Of course it depends on your definition of what a game is. If your definition requires meaningful choices, then there’s not much to discuss. I’m not sure I own another game with such a discrepancy between what you want to happen and what actually happens. There’s even a tacit acknowledgement of how senseless choice actually can be, since the game doesn’t really force you to do anything at the beginning. Save an optional opening quest, you can just go off into the wild and see what happens. Every choice is filtered through a very capricious die roll, and that’s only if you aren’t insane or ensorcelled. If that’s the case, you don’t even get to choose what you want to do to get to that goofy die roll. I’ve read several opinions from people who try to make sense of out it, but those always struck me as a way to make excuses for why they enjoy themselves.

So why would someone enjoy such a game? Because more than most games, Tales of the Arabian Nights gets by almost totally on its theme. I could never get my wife to play another iteration of Western European Orc-Cleavers, but a game that focuses on the world of Scheherazade? That’s a rich vein for game design, and one that even 30 years later is mostly untapped. And it’s here that the fatalistic gameplay really finds its purpose. Choice is a complete illusion in this world. It’s strictly a matter of luck, or fate, or destiny, or the will of the Almighty. It’s this “insha’allah” attitude that is vital to the success of Arabian Nights,and if you aren’t on board with that there isn’t much else to fall back on. You don’t get to decide if you were successful. You can’t put together your plans perfectly. All you can do is make your choice and see if it is the will of Allah.

If that forces me to lose a little player agency, it also makes Tales of the Arabian Nights one of those rare games that actually transports me to its own world. There’s not just the trappings of a setting here, but an actual worldview that governs how things happen. It functions on its own logic, independent from those of the players or other games. All of the knowledge I’ve accumulated about games doesn’t work here. It’s a surprisingly uncompromising stance for a board game to take, since games are usually shaped by the players. Not this one. Like the best fantasy worlds, it’s always been there. It’s just waiting for me to discover it.