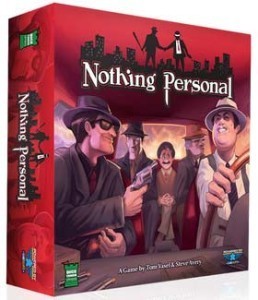 There exists in any art form something called the vanity project. This is a thing where the creators want more than just to create a brilliant piece of art, they want to create something just so they can say, ‘dammit, look at me, I made this thing.’ Board games don’t see this a lot, unless you count the fact that every crappy game that ever gets produced has the designer’s name on the box. But I have seen one spectacular example, and it’s what happens when the world’s most popular (and sleep-inducing) reviewer decides to make a board game.

That’s right, Tom Vasel made a game, and it’s a game about Tom Vasel and his buddies if they were all in the mafia and not gaming nerds. It’s called Nothing Personal, because supposedly that is what gangsters say to each other right before they shoot each other over a business matter. ‘Sorry I have to cut out your tongue and staple it to your face,’ they say, ‘but it’s nothing personal.’

In Nothing Personal, you try to influence various mobsters as they rise to the top of the criminal food chain, so that they will owe your family the most allegiance before they get either murdered in their sleep or hauled off to the pokey for tax evasion. And because it’s a vanity project, it also has great art and needlessly high-quality components. The money, for instance, is so thick that it barely fits in the box, and you have to use a gallon-sized freezer bag to store it. The box is so heavy that it could stop a bullet (I very much doubt that to be true. and it’s a fun game, so don’t shoot holes in it just to prove me wrong). Not the cards, though – they spent a mint on the cardboard money, and still managed to put cheap cards in the box.

Nothing Personal is one of the most confrontational games I have ever played, which doesn’t surprise me because it was co-designed by Steve Avery, a guy known for liking games where you shoot people. As your criminal mastermind rises through the ranks, he undergoes the very real risk of getting himself a pair of cement shoes and a last address at the bottom of the East River. You’re constantly trying to control the guys that have the most juice, because that makes you money and gets you influence – but the guys at the bottom are the ones who get to choose targets when it comes up murder-o-clock.

In fact, Nothing Personal has so much interaction that you have virtually no option to avoid putting a horse’s head in somebody’s bed. There are times when you are simply forced to hurt somebody. It’s not a matter of if you go after another player, it’s a matter of choosing who owes you the most money. In these cases, negotiation skills are paramount. It’s a good idea to keep a few bucks set aside for bribes. I found this delightful, though a bit chaotic and difficult to predict.

Interesting choices abound in Nothing Personal, though the repercussions of those decisions may not be clear until you’ve played once and experienced the unadulterated slaughterfest. Think it’s OK to let your buddy have the hitman? Bad move, man – you might even make a deal to protect one of your own guys, just to see another gunned down in his prime. Then your buddy will shrug and say, ‘nothing personal, right?’

Aside from making a fun, brutally confrontational game and equipping it with extraordinarily overproduced pieces, the best way you’ll know that Nothing Personal is a vanity project is because Tom and his boys put themselves into the game. They put their likenesses on cards and then gave them names that sound like their own names, but with an O on the end because apparently all Italians have names that end in a vowel. This was probably just on the off chance that you somehow missed that the game was from Tom Vasel, and he wanted to be damned sure you knew he made a game.

This narcissistic vanity does go a little over the top to the point of being eye-rollingly absurd, but it can be forgiven because Nothing Personal really is a fun game. It combines a mob theme with exceptional confrontation and fantastic art to create an experience where you can’t even get too worked up when someone kills the capo while you were wearing the ring. Though I do think the name is a bit ironic – for the designers, at least, this game is obviously Something Personal.

Pros:
Great art and very nice pieces
Lots and lots of interaction, most of it wildly chaotic
Plenty of fun decisions with long-term repercussions

Cons:
If you have to get this vain, couldn’t you just order custom license plates?
Cheap-ass cards

I expect other reviewers will have had a field day throwing Vasel under the bus, but really, my main complaint with Nothing Personal is just that it’s desperately vain. Other than that, I liked it.