I Think I Smell A Rat - The Resistance Review 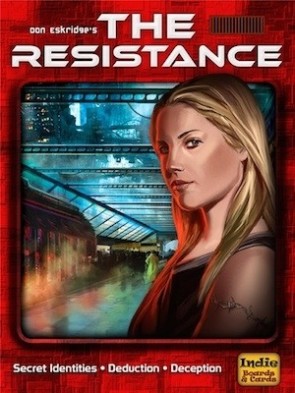 Three years ago I promised I would never play The Resistance again. Back then it was a brand new game, the newest entry in the swelling ranks of suspicion games. Our group had been playing it a lot lately, since it’s short and uncomplicated. The first ten games or so I had a great time, but as it started coming out a little more frequently I realized that it was wearing thin. One particular session was enough for me to decide to close the book on The Resistance, and I stayed with my plan for a full three years. It wasn’t until the last few weeks that I finally returned to this game after my extended hiatus.

The Resistance is the traitor game distilled down to its barest form, while still maintaining some structure. I imagine it was inspired at least in part by the success of the Battlestar Galactica game, one of those titles that made a huge splash when it came out but has eventually faded as its license has lost some relevance. The players are members of the titular Resistance, a group fighting a corrupt government. But some members of the group are spies for The Man, and they’re working to make sure the Resistance fails in their goals. The game consists of just a few rounds where the leader of the Resistance must pick team members to pass a mission. After choosing the members who will go, the entire group votes on whether this team is acceptable. If it is, each team member votes secretly on whether the mission succeeds or fails. A single fail tanks the whole round, so picking the right team members is a big deal. The first side to win three out of five missions wins the game.

Right away The Resistance has a couple of good things going for it. First of all, it’s one of those games that’s short and plays a lot of people. It’s built for game nights, for those moments when a couple groups have finished and are waiting for other tables to wrap it up. It handles more than six players very effectively, because there aren’t a ton of rules and it involves everyone throughout the game. It’s also got a very high “let’s play again” quotient, since it can be cleaned up and turned around in a hurry. Just from a practical standpoint it’s easy to see why The Resistance has been a hit.

Traitor games come with a ton of little quirks, and I’m not sure I’ve played one that could really deal with them all. Battlestar Galactica remains my favorite one because of how it gives the players a job to do, and players can form their own suspicions based on what happens in the game. But it does suffer from some squishy secrecy rules, and it basically tells the players to deal with it. At the opposite end of the spectrum is Werewolf and its many versions. That game has atmosphere going for it if it’s done right, but mistrust is built on a combination of meaningless hunches and nonsense. In other words, this tends to be a rather fragile genre. The Resistance tries hard to keep the experience from unraveling, and it mostly succeeds. It moves the debate on who can be trusted to the center, and it makes sure that failure has some big consequences. A big part of this is that it’s impossible to be sure about anyone. There aren’t many “gotcha” moments in The Resistance, where a person can get caught in a lie based on something that happened in game, and so ideally there isn’t really a lot to debate. It just can move from round to round without much fuss.

But it’s this last point that drives me crazy. Since there aren’t really any ways to catch another player, there’s no way to be sure about anyone. The problem is the good guys can’t really afford a mistake, because it just takes one spy to throw the mission. So you really need to  be sure of something that you never can know. One expansion that is packed in the game gives some cool cards that will let people look at each others’ cards, but since it’s just one person’s word against another it still revolves around who you trust the most.

I guess that’s not a dealbreaker for such a short game, and some people will really like that aspect. But in my experience it mostly means that the spies win almost every time. There are a couple of small mistakes spies should never make, but saving that I’ve never played a game where being a traitor is easier. I don’t like complaining about balance in a game like this, because a lot is dependent on groups and how they play. But The Resistance sure seems forgiving to the spies, and entirely unforgiving to the good guys. In a couple of cases the inability to nail someone down has resulted in a game where people just kept talking and talking. It was this that made me swear off the game, since it resulted in a 90-minute session trapped in a 30-minute one. Most times the spies will do fine if people keep talking long enough to doubt themselves, and they almost never need to force that to happen, since the results of failure are so serious that people second-guess themselves naturally.

So for me The Resistance is kind of torn in two directions. Either you take it very seriously, even if there’s usually not much to go on, or you can just throw your hands up, call it a filler, and not worry about the results. I’ve played it both ways and the results have ended about the same either way without being very satisfying. It’s better in the shorter, lighter version, and that’s the spirit in which I’ll play it. But it makes me wonder when someone is going to make a suspicion game without some squirrely tendencies, and whether that’s even possible.