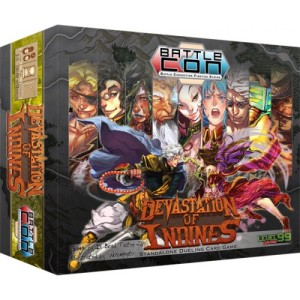 Before I starting writing this review, I had to go back and find the review I wrote of its predecessor,  BattleCON. In case you’re wondering, I used the word ‘battle’ an awful lot when I write reviews. It took me half an hour to find the old review. For no reason I can understand, I found a review of a kiddie game called Best Day Ever that was the Worst Game Ever. Because I said ‘battle’ in that review.

That’s a total, unrelated tangent that serves no purpose except to point out that I am fond of saying ‘battle.’ The actual point of this review is to discuss the new version of BattleCON, called Devastation of Indines, which I picked up at BGG Con last year and am just now reviewing so it’s not like I could accurately say this is a new game. It is newer than the original, though, so I suppose it’s all relative.

The original BattleCON was a pretty bad-ass game. There’s a surprising amount of strategy for a game where you only have twelve cards to play, and all the variant rules and extra characters give you lots of reasons to play a whole bunch of times. It’s the kind of thing you could play every day for six weeks and then get bored and forget about it until you clean out the closet and find it sitting under the dried-out sex lube and replacement light bulbs.

Apparently, when designing Devastation of Indines, the creators decided that if a little was good, a whole damned lot would be totally kick-ass. There’s so much game in this box that you could use it for a defensive weapon against home invaders, simply by dropping it on them from the second story. You could play Devastation of Indines fifty times before you used everything in the box. Hell, I’m not even sure that’s enough. You would still have leftovers.

Let’s start with a quick run-down of the game itself. At its core, BattleCON (and Devastation of Indines, which is part of the BattleCON line) is a fighting game between two people reminiscent of Street Fighter or Mortal Kombat, where you combine a personal style with a generic attack type, reveal at the same time as your opponent, and see who got punched in the neck. There’s a lot more than that, though – you’ve got maneuvering and timing, boosting and sacrificing, even out-guessing your foe to counter crushing attacks and turn them around. It’s an exceptionally deep game, for being so easy to play.

But like I said, there’s an absurd amount of game in Devastation of Indines, and that quick description really only gives you the basics. There are thirty different fighters, for starters. If you and a friend each play a different character every time, it will still take you fifteen games before you’ve even seen all the brawlers. And that assumes that you don’t find one you like then play it a dozen times, just to get down all the tricks and tweaks that make that particular dude unique. Now, that seems like a pretty impressive amount of game, but we’re just getting started. There are two beefy rulebooks for this game because there are so many ways to play.

For example, there are nine different play modes. So if you want to try each play mode with each character, you have to play 270 times. The solo mode has boss characters, and there are six of them, so that adds another 150 games to try all the combinations. Add in six variants and the number of games you could play before you’re retreading old ground is approaching 1000 games. If you like to play the same game a lot of times, and have a different experience every time, you will have a nearly impossible time finding better gaming value than Devastation of Indines. At that rate, even if you pay retail of $75, you’re actually getting a cost of around eight cents per game. Yeah, that’s a lot of math, and some messy extrapolation (some of which may not be entirely feasible), but my point is, you get a hell of a lot of game in this game.

Quick confession time – I did not play this game 1000 times. I did not even play it 20 times. I am 100% confident that I have come nowhere near discovering all the experience Devastation of Indines has to offer. When I tell you about the kick-ass solo mode where you battle through a dungeon defeating automated enemies, it’s not like I’ve played it enough to be good at it. When I tell you about the team games, or the advanced fighters who require a more in-depth knowledge of the game, I’m just telling you what I read in the rules, because I haven’t even played a team game. I mention this, not because I want to invalidate my review (though that may just be a happy side-effect), but because I want you to understand that there is a metric ass-ton of game in this box.

I have, however, played Devastation of Indines enough times to know that it’s freaking brilliant. It has variety and depth, strategy and tactics, and boatloads of cool anime people to bring the whole thing to life. The graphic design is a little spotty, but it doesn’t interfere with the game so much as it makes it less attractive than it could have been. I still really dig the entire BattleCON game, and would love to have someone who would come over to my house twice a week to play the crap out of it. My wife didn’t love it, mostly because she was never a big fan of fighting games and finds the entire concept mostly irritating and pointless, but I would play this sucker until I tried every possible variant and character.

If you’re the kind of game nerd who wants to play every game out there once, Devastation of Indines is not for you. To really get your money’s worth with this one, you need to be prepared to enjoy it over and over for weeks, maybe months at a time. It’s not a simple throwaway Euro that you try one time before you put it on the shelf. It’s a keeper, a one-game hobby. In that respect, it reminds me of HeroScape, but since it’s not Hasbro, it doesn’t look nearly as good (or cost nearly as much). As a fan of the old-school fighting game, I enthusiastically recommend Devastation of Indines to anyone who fondly remembers pumping quarters into machines for half a Saturday in a dimly lit arcade because your mom gave you twenty bucks and told you to keep busy for the afternoon so she could go have an affair with her tax accountant.

2 players (or solo, or four-player teams, or other stuff because holy crap there’s a lot of options)

Pros:
At its core, a smart and deep fighting game with a lot to master
One hell of a lot of game that you could play a lot of times before you got bored
Cool anime theme with some cool anime art

Cons:
Graphic design is a little busy, and not always very pretty

The only place I can find that you can get Devastation of Indines is direct from the publisher.