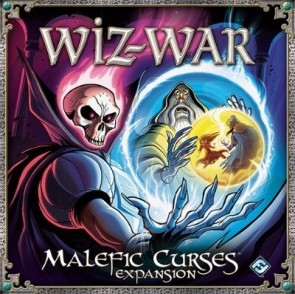 For several years, I’ve was convinced that Fantasy Flight’s greatest reprint was the outstanding work they’ve done on Cosmic Encounter. They republished a long out-of-print classic and made it relevant for new audiences, but they also support it with solid expansion work that keeps taking players deeper in the world of the game. Well, don’t be surprised if one year from now we’re crowning a new champion, because I’m starting to think that as an update to a classic game Wiz-War might be even better. The first expansion, Malefic Curses, is everything it needed to be. I can heartily recommend it to anyone who already loved the base game.

There are a lot of things that make Malefic Curses so good, but perhaps the best is that it requires very little of the player. The biggest addition is three new schools of magic, amounting to 72 new cards. These new spells are a boon to Wiz-War, elevating the experience and making it even better than it was before. It also adds boards and a mini for a fifth player, and a few components that were missing in the original game. The actual rules themselves are almost identical to what they were two years ago, with a couple small exceptions. It’s still the same game of racing around the labyrinth and blasting spells at each other, and that’s exactly how it should be.

The three new schools are Hexcraft, Necromancy, and Chaos, and they all feel pretty distinct. Hexcraft focuses on traps and curses that are tied to physical spots on the board. Hexes end up functioning a lot like rosebushes and other permanent effects, but it’s nice to have one more way to booby trap the game. Necromancy revolves around effects that drain life from other players, or the use of “spirits” and what have you. It’s a pretty nasty school and ratchets up the damage considerably. But my favorite of the new cards are from the school of Chaos, which embraces high-risk, high-reward cards that either deal massive damage or fail spectacularly. That’s the kind of thing that makes for memorable games, and Chaos makes great use of die-rolling to make sure the results stay unhinged.

I suppose you could play by the newfangled rules that Fantasy Flight provided in the base game and use only a few schools of magic at once. But Wiz-War only came alive for me when I started using all of the original rules from the old game. That means you mix up all the cards in a big stack, and that’s how I’ve used Malefic Curses. The overall effect of the new cards is pretty obvious: there’s a lot more attacking. The base game felt a bit heavy on counter-spells, making it hard to chain together bizarre combinations and big slam-dunk attacks. The expansion cards favor craziness and attacking in a big way, and even the new counter-spells are about reversing damage and launching it back at the attacker or doing some other negative effect. I was never really bothered by the card mix in the original game, but now it feels like it’s somehow been concentrated. Attacks have more variety, are more likely to deal damage, and give a much broader range of creative opportunities for the attacker. My games have been mostly split between wins by survival and wins by treasures, and that feels about right.

The only new rules involve the use of energy. The first of these is tying energy to a die roll, represented by a little pyramid icon on the energy value. It’s nice for some variability, but it’s not exactly earth-shattering. The bigger addition is that of flash energy, a type of energy that can only be used to boost spells and not movement. Aside from the more attack-y deck, flash energy means that powered spells are now a little easier to power without letting everyone cruise all over the board. Indeed, it makes a lot of cards from the original game much more useful, since you don’t have to choose between buffing the spell and getting where you need to go.

I’m a little more mixed on the addition of a fifth player. It works well enough, but Wiz-War is already a game that demands a fair bit of reading from new players, so adding another player really only works if that person already knows what they’re doing. Otherwise it can bog down with extra people. But still, I at least like the idea of playing with more people at once. Chaotic games usually are more to my taste with lots of people, and four always seemed like a low ceiling anyway. The mini for the fifth player looks really cool too, and it cuts an impressive figure on the board. For that matter, the components carry on the great production values of the original game. Wiz-War is definitely one of the nicest-looking products FFG has ever put together, with illustrations filled with insane action and goofy humor.

Malefic Curses is in the  top tier of game expansions, the kind that can find the core of what makes a game great and hammer away at it until everything hits a fever pitch. Fantasy Flight clearly thinks Wiz-War is worth expanding even more, because another expansion, Bestial Forces, has already been announced for later this year. Based on the strength of this first one, I can safely say I’m thrilled to see what else is in store for Wiz-War.