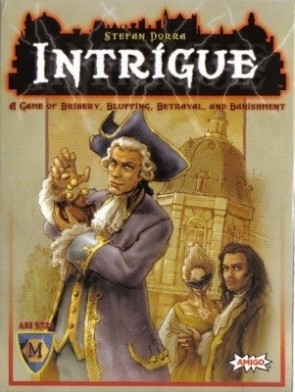 If we were to classify games like boxers, based on weight, I think that Intrigue might win the award for the most conniving game in its class. It forces the player to make endless promises to get ahead, and then it makes you break at least some of those promises, trampling on the needs and desires of your fellow players. My friends and I have joked that you lose a little bit of your soul every time you play, and there are moments when I’ve felt genuinely guilty for what the game is requiring of me. I would only ever play it with people who were willing to leave all grudges at the game table, and even then I might be more selective than usual.

Each player runs a castle, where they are responsible for staffing the servants and sending workers to the castles of other players. There are four different jobs, and four different salaries available in each castle. So when you send your doctor to take a job at yellow’s castle, you haggle with yellow about how much of a bribe you are willing to pay to get the salary you want. You have to pay the agreed amount in advance, and then the employer can put you wherever they like. If two people apply for the same position or salary, they will each make their case and negotiate an arrangement with the employer. Once again, the employer will take the money in advance and screw at least one of the players, sending the failed applicant to the land of wind and ghosts. At the beginning of every round you collect income from the positions you occupy in other castles, negotiate the people who applied for jobs at your castle, and send out two more people to take jobs elsewhere. Most money at the end wins.

The most impressive trick in Intrigue is how honesty isn’t really a viable strategy. You’ll have to kick someone into the abyss several times to have any shot. If you wanted to be wishy-washy and noncommittal it would probably only earn you some meager cash. Of course that depends entirely on who you are playing with. As in all games with a closed economy and negotiation, a lavish group will make for a different experience than a group that is more calculating. If you’re the one guy who won’t pay money you might just find you can’t get a position anywhere. And of course if your group is more inclined to hold grudges, the other players become a lot less predictable.

Not only does the nastiness impress me, but the durability of the experience is also considerable. I’m always worried that games with so much negotiation can be derailed by one stupid player, but in this case the stupid player will probably just lose and not hurt the experience much for everyone else. One way it pulls this off is by keeping all of the resources above-board and open. The only hidden information are the decisions that your fellow players will make, and though that’s no small thing attentive players will often have a good idea for how much they can afford to bribe before it’s not worth their trouble.

Indeed, it wasn’t until my third or fourth game that I realized how calculating Intrigue actually is. If you have a table filled with level-headed decision-makers, bribes will often boil down to a question of how much profit can be made from how many turns in a specific position. It’s not that there isn’t reasonable negotiation to be made from such calculations, but it’ll leave some players in the dust. In my last game I was in a situation where the two players applying for a job, and my decision rested entirely with which one I perceived to be winning. One of them claimed he was losing, but I assumed anyone would say anything to get a job, so I went with the other guy. Turns out he wasn’t lying. I had unintentionally made the rich a lot richer, and it actually lost me the game. I’m never one to parse out things like that, and I can live with losing a game that way. But those who can do the math in their head are at a distinct advantage.

This number-crunching actually holds Intrigue back from being as nasty as it could be. I wish there was some hidden information so that you could pack some really nasty surprises in deals. It might be something as simple as a deck of cards that can included in a deal, that may or may not hurt the receiving player, a little like the Atreides player fooling someone else to buy a worthless card in Dune. One of my friends thought it’d be interesting to see how it would affect the game to somehow make all bribes secret. Maybe neither of those ideas would yield much, but I feel like leaving out some hidden information keeps it from being truly evil. Including more secrets would also make the game more forgiving for those who just can’t be bothered to track numbers.

My inability to follow the money changing hands doesn’t keep me from engaging with Intrigue. It’s really my problem more than the game’s. Stefan Dorra, whose designs also includes the fifteen-minute masterpiece For Sale, released Intrigue 20 years ago, and one reason it’s lasted so long is because it’s as clean as it can be. I still can’t shake the feeling that some kind of hidden knowledge would elevate the game to something that I enjoy more. But even in its current form it’s a little slice of evil, a black-hearted game that is able to accomplish a lot with very little.

Nate Owens drinks too much coffee and likes the Star Wars prequels. You can read more of his mental illness at The Rumpus Room.