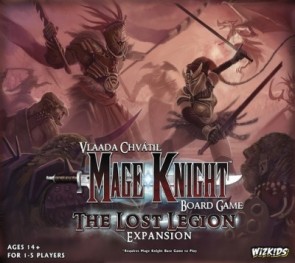 It says something about Mage Knight’s quality that even as my life has become less permitting of long dense games, I still find time to play Vlaada Chvatil’s classic several times a year. I enjoyed it when I first got it two years ago, but it has only improved since then. The more time I spend with it, the more I am convinced it is not only Chvatil’s best game, but perhaps one of the  best fantasy board games ever designed. But one thing I didn’t think the game needed was an expansion. It’s such a vast ocean of a game with so many ways to play, that I couldn’t think of anything that needed to be added. But now that I’ve played The Lost Legion a few times, I see how wrong I was. It’s a terrific expansion, enriching the original experience to such a point that to go back to not using it would  feel like a regression.

There are many additions in The Lost Legion, but the most notable is General Volkare. He is an antagonist character, used mostly in the solitaire and cooperative versions of Mage Knight, where previously players would run a dummy player to make the tempo more of an factor in the absence of human opponents. Volkare is a general who is asserting his power over the land. He has an imposing mini, and is followed by a stack of tokens that constitutes his army. There are a couple ways to use him, either to beat him to a city so that he can’t conquer it, or to destroy his army before it can leave the board. There is also a fifth playable character, Wolfhawk. That means you could now play with five players, though I have no idea why you would want to. There are also new cards for every deck, new monsters of each type, and a few cards that have been fine-tuned from the original game.

Before adding General Volkare, I had started to notice some of the peculiarities of the solo version of Mage Knight. While I always enjoyed it, it felt like exercise. There was a feeling that you were just trying to destroy two cities to see how effectively you can do it. There was a clear goal, but it still emphasized the part of the game that valued efficiency and planning without providing a lot of context for what you were doing. Most of my games have been solo, but I really looked forward to those times when I could play against another player. That felt like the “real game” to me.

Volkare changes all of that. He makes the solo game far more purposeful and engaging, without sacrificing any of the depth and strategy. My first game using Volkare could only be described as seeing Mage Knight with new eyes. My goal was no longer to simply conquer for its own sake. Now I had a mission, to destroy my adversary before he could challenge my authority over the kingdom. It added an enormous amount of narrative to the solo experience, and even though it is still a game that favors the efficient mind, those of us who are efficiency challenge will now find a far more engaging solitaire game.

The other elements aren’t nearly as notable, but they are all very well-executed. I love having new cards in every deck to give the game some more variety. They can be left in without too much trouble as well, which is good news for people who hate to separate expansion components. The best additions are the new monsters, which add a lot of variety and risk to all types of foes. I also love the new terrain features, like the labyrinths and ramparts. Such elements are inserted in the game without too much fuss, though perhaps that is a relative qualification with a game as dense and complex as Mage Knight. In truth, aside from Volkare there are almost no new rules to worry about. Some things have been tweaked to better balance the game with the new cards, but experienced Mage Knight players should have no trouble absorbing it.

How much you like The Lost Legion will hinge on how you play Mage Knight. It’s greatest value is to those who usually play cooperative or solitaire versions. Solo games amount to about three quarters of my plays of Mage Knight, so this expansions was made with someone like me in mind. But if you are the type who is always able to find an experienced opponent who would rather play competitively, the new additions amount to new cards and terrain. That’s not a small addition, but it does bypass General Volkare, which is easily the most impressive element. Still, even if you are the type who would rather play against other human opponents, The Lost Legion improves the other game modes so much that you just might find that coop or solo games are now worth your trouble. I never had an interest in cooperative games until I had the expansion, and to my delight I discovered it was a wonderful way to play.

A game as challenging as Mage Knight presents plenty of learning curve without adding any new elements, so I would definitely not recommend that new players just dive in on this end. But if you’ve put in maybe 10 solitaire games, you clearly enjoy Mage Knight enough to invest in the expansion. For my own part, I have no more use for the solo game as presented in the original rules. To go back to Mage Knight before The Lost Legion is pointless. I still love playing it against a worthy opponent, but now the solo game can hold its own. It solidifies Mage Knight as one of the best strategy games currently available.