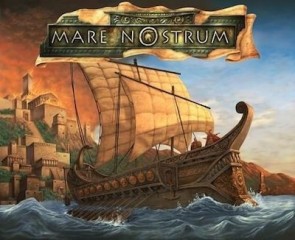 I received my copy of Mare Nostrum in a trade almost five years ago, and I have played many times. Just this weekend I played it after an extended hiatus. We were playing with the Mythology expansion, where the players have the option to call upon the favor of a god to give them a one-shot boost for the round. I made the foolish decision to spend the resources to use a god that actually was a lot less useful than I had expected. Mare Nostrum is not a very forgiving game when it comes to wasting resources, and I assumed I had blown this one. But then an odd thing happened. The god I had selected, Baal, had the ability to destroy a city of an opposing player. I realized I was holding on to a live grenade that I could lob at someone, and that I could get my way to a limited extent by using the threat of the destruction of a city. I’ve played many times, and for whatever reason this had never occurred to me. I probably would have still been better off saving my cards and doing something else, but for a brief glorious moment I had the joy of watching an old game reveal yet another new facet to me.

Mare Nostrum is the kind of game that keeps on giving. It is so many things at the same time that I am almost overwhelmed when I consider it. It’s an epic civilization-building experience, filled with great clashes and expansion. It’s a tense standoff between helping yourself and preventing someone else from winning. It’s a two or three hour game, but it feels like an epic with almost no effort at all. It’s all about learning to read the situation on the board, finding the negative space in the rules that will allow you to do something you never considered. It’s a game of great nuance and subtlety.

The magnum opus of French designer Serge Laget, the players all take the role of a great civilization of antiquity: Greece, Rome, Carthage, Egypt, Babylon, and Atlantis if you are using the expansion. Each turn is composed of different rounds. The players start by gathering their resources, then move to a building round, and end with a military action round. Each of these rounds is dictated by one of the players as determined by the state of the board. These leaders wield an staggering amount of power, and they are able to cripple people by making them go at the wrong time. There is a lot of room here to make deals and threats, to ensure that you aren’t getting the short end of the stick. The main thrust of the game is to build wonders and heroes. Each player starts with one, but building three more will win the game. Alternately you could build the Great Pyramids and win that way, but  those are more expensive. Everything is paid for in sets of three, either made of different commodities that are produced in various spaces around the board, or tax cards which are generated in cities. The cheaper items only cost a set of three cards, but bigger items will set you back six. A wonder or hero cost nine, and the Pyramids twelve.

What’s striking about Mare Nostrum is how lean the rules are. There is nothing there that isn’t necessary, and at first glance it feels under-designed. Certainly that was the initial response on Boardgame Geek back in 2003. The different civilizations all are distinct with their own strengths and geographical advantages, some of which aren’t evident until you’ve played several games. Greece was a big sticking point for some who felt they were especially vulnerable to attacks from a belligerent Rome. I’m not one to often comment on balance issues, but anyone who is griping about the balance in Mare Nostrum has not played it very much. The real issue is that the game doesn’t make any effort to balance itself. There is no catch-up that will help the guy in last place and hold back the leader. The players have to take it upon themselves to hold each other back, and if that’s not something that sounds fun then you will hate Mare Nostrum, because that’s basically the whole flow of the game. Pay attention, use all of the tools to hold back  the winner, and sneak into that win by yourself. It requires a good five games before it begins to come together, which would be a deal-breaker if the game were more complex.

In theory this is a eurogame, but it feels like no other eurogame I’ve ever played. It absorbed all of the good lessons of European design, the threaded turns, constant player involvement, and manageable playtime, but it’s a design without a safety net. It trusts the players to figure things out on their own, based not on some strategy hardwired into the rules but on what the other players are doing. It is truly wonderful to see the game unfold, both while you’re playing it and from session to session. There are so few rules to keep in mind, but there is so much to consider, and you consider those things as a group. It’s risky for two players to go after the leader, because that often will mean that another player will have an opening. Building a wonder is almost always a good idea if you can manage it, but it usually taps you out of resources for a whole turn. Resources are limited and every one counts, so even the status quo of establishing borders and hunkering down isn’t sustainable. Someone will always rise up and need to be dealt with, and it is done with more than military might. It involves agreements, promises, and threats.

Mare Nostrum received one expansion, called Mythology. It adds a sixth civilization, gives the players new units and wonders to build, and allows the players to call upon the gods to help them. I received the expansion when I traded for the base game, so I have almost never played without it save for just a couple of sessions. That’s all to give you some background when I say that it might be the best expansion to any game I’ve ever played. It does make the game a little busier, since you now have to account for another player, mythological creatures, and divine retribution. But the payoff is an enormous scope and ridiculous variety. The integration of the new elements is also terrific. It includes a new rulebook with the original rules and the expansion rules combined, and it rebalances a few elements to make the game function with the new components. I do have friends who think it clutters the game too much, but I just don’t see it. Mare Nostrum was great by itself, but Mythology makes the game a true masterpiece.

That’s right, I said the “m” word. Mare Nostrum never felt like it was properly appreciated when it was still available. It didn’t help that it really worked best with a full complement of people, or that its publisher went under. But even without those factors I doubt it would still be with us. It’s just too open for  a lot of gamers and requires more attention while it’s going on than many are willing to commit. I’ve heard rumblings about a possible reprint, a “second edition” from Laget that changes some elements. I’d love to see it back in print, but I will cop to some “old man” attitudes and say that I would probably not be very accepting of any new rules. As far as I’m concerned it already achieved perfection the first time around.