All My Lovin' - Love Letter Review 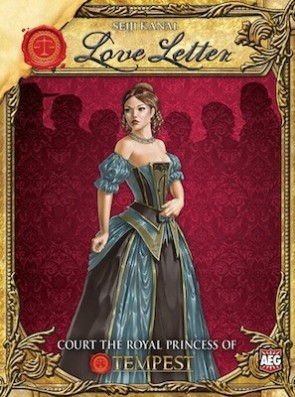 I’m not sure I actually like Love Letter, but I also don’t know if I’d ever turn down a game of it. What would  be the point of refusing to play? It’s such a trifle that I find it hard to believe that anyone would hate it enough to want nothing to do with it. In fact the most impressive thing about Love Letter is probably that it makes a case for itself at all, over easier activities like having a sip of coffee or sitting quietly. It’s just good enough to justify its existence and it makes the wise choice to wrap it up at about the two minute mark, then grab the cards, shuffle them up, and go again.

The goal, as it were, of Love Letter is to express your affections to the Princess. There are sixteen cards, divided into eight different ranks. Each player is dealt one card, and on their turn they draw another and play one of the cards in their hand. Each rank has an action associated with it. There are ranks like the lowly guard, who can guess what card someone else is holding to knock them out of the round. There’s the king who can swap hands with another player. And of course there’s the princess, who is ranked the highest but will force a player out of the round if they have to discard the card. The round goes until all but one person is out of the game, or until the draw deck runs out, in which case the highest rank gets their letter to the princess. The winner gets a little red cube representing the affection of the princess, and the first person to hit a certain threshold of affection wins the game and, presumably, the hand of the princess.

Love Letter carries minimalist design to its logical conclusion. It’s gaming on the micro scale, calculated to be as quick and lean as possible. I almost wonder if it was designed on a dare, kind of like how Dr. Seuss wrote Green Eggs And Ham using fewer than fifty words. Actually that’s not a bad metaphor, because Love Letter has a lot of charm in its size. It fun to see how the cards interact, not unlike the eight roles in Citadels. It doesn’t exactly yield endless surprises, but it has the good sense to be just interesting enough to maintain its short session time. The work of Japanese designer Seiji Kanai, it feels almost like a browser video game, the kind you keep playing well after you should because of how it makes you smile.

It’s a good thing it’s as short as it is, because I’m not sure it rewards much more than not being an idiot. In any given turn you have one of two cards to pick,  and while a binary choice isn’t really a problem in theory, most turns have a clear right and wrong choice. It’s true that the game does reward some light card-counting, but when it’s such a small deck you have to be really drifting to not do so. The more Love Letter I play, the more it feels like a widget that randomizes its outcome very effectively. It’s very common to be knocked out before you even get a turn, and I feel like I’ve only ever won on dumb luck. I’m simplifying a little bit here, but there’s a definite sense that the game might be crowding out the player. To be fair I didn’t get this feeling for a little while, but now that I’ve seen it I can’t unsee it.

This would be a big problem in sixty minutes, or even thirty, but it’s forgivable when a round is so short. At least that’s what I’ve been told. I’m not really sure I buy it though. On one hand my “widget” complaint is more of a problem in the abstract, something that would become an issue if a round lasted any longer. But at the same time the only thing that really draws attention away from my issues is the length. I feel like it should be a problem, but if it is it hasn’t really kept me from trotting it out at various game nights and playing several rounds. A problem that doesn’t affect my enjoyment of the game isn’t really a problem at all.

One thing is for sure, American publisher AEG has made some smart marketing choices with Love Letter. Their main version is sold in a little velvet bag, which has ended up being a pretty cool visual calling card. It does the impossible task of making a $10 stand out on a game store shelf. There are a couple of other cool versions too, one of which is a replication of the original Japanese printing. This is the version I have, since I much prefer the artwork in that edition. There’s even a Wedding Edition that AEG only makes available in case of an actual wedding. Since it’s such an easy game to teach and play it can be adapted to just about any situation, including those where no other hobby game would ever get played.

As I said early on, the real wonder of Love Letter is that it manages to get played at all. That doesn’t sound like a ringing endorsement, but something this short has to have something going for it to justify playing it. It’s a little too “autopilot” to really be a top-tier short game like For Sale or Coup, but a lot of games are found wanting when compared to the masterpieces of the genre. Love Letter gets by on its charm and its length, and that’s good enough.