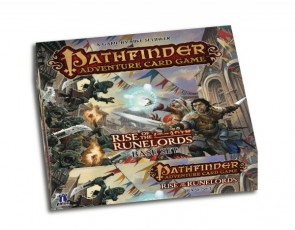 There have been many, many attempts at blending role-playing games and strategy games. Until recently, almost all fell foul of the fundamental mismatch between playing co-operatively in the imagination and competing on a board.

The latest iteration is Pathfinder: the Adventure Card Game. Based on the famous role-playing game of the same name it may be the purest distillation of the adventure game concept yet. It’s smart, simple and packed with potential variety. But for all the benefits it boasts it trips on perhaps the most basic hurdle in game design: it just isn’t terribly interesting to play.

The base game comes in a quite colossal box which is largely empty, leaving space for expansions. It’s entirely card based, which is a good thing. Cards are about the only way you can shoehorn enough colour and variety into a tabletop game to even approach the fecund imaginations of GM’s everywhere.

You prepare by building a lot of decks. Each player selects a character and chooses cards for their decks based on that template. A warrior might be instructed to take lots of weapon and armour cards, while a mage will have spell and blessing card instead. There’s pre-selected decks for those that want them. But trust me: this is the best part of the game, as engaging as putting together a set for your favourite collectible card game. You won’t want to miss out on it.

Then comes the drudgery of preparing location decks. The locations you use depend on the adventure you’re playing. For each location you take a certain number of cards of different types, just like building a character deck. So the Goblin Tunnels have lots of monster and barrier cards, but a farmhouse is more likely to have helpful items and equipment. Unlike the character decks you draw these at random from the box, so the contents of each deck comes as a surprise.

The game then plays out with each player drawing a card from their current location and resolving it. Most cards, after resolving, get removed from the location deck. The final goal is to locate a villain that’s hiding in one of the decks and defeat him. But if you uncover the scoundrel and haven’t yet closed other locations by defeating the henchmen lurking there, he can run away. So you keep hunting until you defeat the big bad or a 30 turn timer runs out.

There’s no denying it’s pretty exciting. No-one has the least idea of what’s in those decks, or where the villain and his henchmen are ensconced. With such a huge selection of cards to pick from, the surprises come thick and fast. Zombies and Shadows mix with Harpies and Ogres. Deadly pit traps can nestle up close to potions and chests of treasure.

So why, then does the game feel so flat once a few turns have passed? The problem is the resolution mechanic. For all the bloated text in the awful rulebook, which makes the game appear far more complex than it is, resolving comes down to one thing. You look at a target number on the card you’ve drawn, pick some corresponding dice off your character card, roll them, total the result and try to beat the target.

That is, in effect, the entire game.

As you might expect it’s nowhere near enough to convincingly differentiate all those different cards. The result is that colour and flavour drains out of everything you encounter. All the richness and imagination of a fantasy world that’s been years in development rendered into two-tone by a weak and pointless mechanic.

After a while it gets so bad that the only difference between turning over a treasure and turning over a monster is whether the encounter hurts or benefits your hero. In both cases you still just look at a number and roll dice to beat it. If the card feels no different in play, why make the effort to differentiate it in your imagination?

It’s made worse by the co-operative nature of the game. I find most co-ops either too random or too predictable but it’s a mechanic that seems comfortable for adventure games. But when the core of the game is so trivial, there’s nothing to co-operate over. Decisions consist of nothing but unguessable risk-reward gambles.

It reminds me a lot of Talisman, a game that suffers from many similar complaints. But the slight extra complexity in Talisman is just enough to bring its fantasy thrillingly to life. The movement on a board gives it an extra element of spatial strategy. And most crucial, its competitive nature ensures the game stays taut and compelling long after Pathfinder has become flatly repetitive.

At this point you’re be justified in asking why such a bland, boring game is riding so high on the popularity wave. I’m glad you asked, because there is a reason. It goes back to where I opened this review with the building of character decks.

But here’s the kicker: you’re still reqired to fit in with the card counts associated with that character template. Some feats increase the amount of different cards you’re allowed in the deck. But you’ll still have to sit down, sort through your loot, and decide what to keep and what to discard.

This is a superb example of how the packed the game is with clean, intuitive yet thematic mechanics. Your deck limit is a brilliant yet simple way to mimic encumbrance. There are lots more. Your deck is also your life pool, and wizard types have a bigger hand size than warrior types. So they go through their cards quicker, making them simultenously more flexible yet more fragile than their brawny brethern.

However, this plethora of breathtaking design makes the central draw, dice, roll mechanic even more infurating. With so much creativity on display elsewhere, why is the core of the game so clunky and pedestrian?

But I digress. One you’ve re-arranged your deck to your liking it’s back to the lather-rinse-repeat tedium of adventuring. But the sense of advancement is palpable. Lots of games succeed in making characters feel more powerful as they play. Only Pathfinder succeeds in making them feel so uniquely personal to the people that play them.

Does the draw of slowly bonding with a character as you tweak their deck to your liking outweigh the dead matter of the adventure itself? Only just. Yet there’s another consideration. Pathfinder was obviously designed to be played as an ongoing campaign, but this starter set contains only a sixth of the required material. There’s another five adventure packs to purchase to complete the story.

Each scenario takes thirty to sixty minutes to play, and there’s maybe 35 scenarios in the campaign. If you find the campaign sounds appealing enough to make you want to invest that kind of time and money, then Pathfinder offers a unique, but flawed, card-based RPG experience. For the rest of us, who want a bit less commitment and a bit more game, we have to carry on waiting for the ultimate marriage of role-playing and strategy.