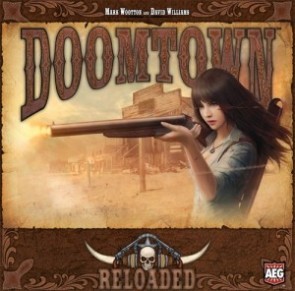 As many of you prepared for your annual trek to GenCon, I feel certain there are a bunch of you planning on making a beeline for the Alderac booth to pick your new, shiny copy of Doomtown Reloaded. And I can hardly blame you – Doomtown was one of the greatest CCGs I ever played, and to this day, remains my absolute favorite. Evil monsters, heroic undead, gunfights and horses and ghost rock – Doomtown was an Old West horror game that always left me half-wishing I could visit, and half-glad I couldn’t. And it wasn’t just the setting, because the game was a blast. So yeah, I can understand your desire to stand in line for your copy of the newly risen successor to what might have been the greatest collectible card game ever known to man.

Let me save you some time.

I’ll start with the good parts, so that there’s something nice at the beginning. Doomtown Reloaded is almost exactly the same game you remember from 15 years ago (unless you don’t remember it). There aren’t event cards, but otherwise, you’re still looking at recruiting dudes, moving around the town, building saloons, summoning werewolves and building mechanical horses out of dismantled steam engines and horrific screaming stones. If you haven’t played the original, I’ll sum it up real quick.

You recruit dudes, which you have to pay for. You also buy locations in town, and you pay for those. Locations tend to give you control; dudes tend to give you influence. If you have more control than your opponent has influence, you win. One good way to make sure your opponent is low on influence is to kill all his people, which you do by sending your dudes into his hotels and saloons and general stores and shooting holes in anyone you find inside. Gunfights are played out with hands of poker pulled from your deck, meaning that you can stack your deck with good cards to win a lot, but then your opponent can play Cheatin’ cards on you to make sure you lose.

So that’s the basics, but then you add that Doomtown is based on Deadlands, which is based on the Old West if Hell literally broke loose. You’ll meet giant prairie ticks in the silver mines of Nevada, blood-sucking vampires who travel by train, and giant armor-plated bulls that ride through the sky just to whoop your ass if you get too cocky. Of course, those appear more in the RPG than in the card game, but the point is, this is campy horror in the Old West. It’s pretty much awesome.

That’s the end of the good parts, in case you were keeping track. Now, bad parts.

First, let’s talk about the factions you get in the base set of Doomtown Reloaded. Sweetrock Mining Company is gone, replaced by Morgan Cattle Company. They’re the big, soulless business aiming to get rich at any cost – but the mining company made more sense, because the town was originally on the edge of the remains of the California coastline where they were digging up ghost rock like it was free. The Sloane gang replaces Blackjack, which is really sad because Blackjack was great – he was basically a black Burt Reynolds bandit who lived outside the law but still lived up to a moral code. The Law Dogs are still the Law Dogs, because somebody has to be the 5-0, but the last faction is where any compromise becomes impossible.

The original Doomtown had several groups of terrifying, horrible fiends. The Flock were pseudo-religious cultists who looked like they were spreading The Good Word, but were actually eating souls like Skittles. The Whateleys were this inbred family of sorcerers and monsters who worked hand-in-hand with shapeless abominations. They were outstanding and horrible and absolutely fit the theme. You could build a huckster deck, a monster deck or an undead deck and make them work great. Heck, the Flock even let you pretend you were almost good guys and use miracles and holy spells. As the game went on, you had Maze Rats with their hopping Chinese vampire, harrowed gunslingers in the Texas Rangers, and lots more spooky stuff to make you grin and shiver. But you never had clowns, and that was good, because now we know for sure that clowns in Doomtown totally, thoroughly suck.

The Fourth Ring is the spooky faction in Doomtown Reloaded, and they’re lame. It’s a circus made up of scary, evil people. Sure, now you have hucksters and monsters and zombies and what-not, but you still have a freaking circus, and the whole circus is basically just clowns. And a demon. Okay, the demon is cool, but the clowns are LAME. For one thing, you just don’t really see circuses touring the Old West, because until around the turn of the century, they were mostly confined to Europe and the East Coast. For another thing, they are all clowns.

I really wish The Fourth Ring had been replaced with a traveling theatrical troupe. The leading lady could be a demonic seductress who consumes the souls of her male lovers. The stage director would be a powerful ritual warlock bending the minds of his audience to his will. The stagehand who pulls the curtains would be a patchwork abomination, and the leading man, a Lothario by day and werewolf by night. So many great options this way. But instead we get quasi-scary, ridiculous clowns. I was very disappointed.

I could get past the circus, because I was playing Doomtown again. But Doomtown Reloaded just isn’t Doomtown, and it’s because even with a great theme and a kick-ass game, you’re still stuck with the cards in the box. And they are horribly inadequate. For instance, the rules say you can put four copies of a card in your deck – but you only get two of anything, so I guess you better go buy another base set, huh? There are deck lists for four different decks, but you only get enough cards to build two of them at the same time. Compare this to Romance of the Nine Empires, which comes with FIVE preassembled decks, all ready to go, and you may wonder why you’re not playing that instead. Really, the card distribution is the biggest problem, and it kills the game. For this to be as much fun as it could have been, it should have had twice as many cards. At least.

The thing that chaps my ass here is that Romance of the Nine Empires costs the same amount of money as Doomtown Reloaded, and yet has so much more in the box. Sure, Doomtown Reloaded comes with two player boards, and the cards are really, really nice, and I know that stuff costs money. But I would have rather seen the card count you find in R9E, because more cards means more fun. High-quality components should not replace having more game. The card distribution in Doomtown Reloaded feels cheap, and limits how much fun you can have with the game. I would rather have seen the game cost another ten bucks and have a whole lot more cards, because in a game like Doomtown Reloaded, more cards means more game.

If you can get a two-for-one deal on Doomtown Reloaded, and if you’re okay with the dorkiest clan of goofball circus freaks that ever camped their way out of a horror movie, you will probably have a really good time playing this game. But if you’re hoping that your single set of the new version is going to bring back floods of memories of the grand old times, forget it. Alderac is just going to have to do better than this.

2 players (doesn’t matter if more are playable, you don’t get enough cards to build more decks)

Cons:
You don’t get enough cards to make this as much fun as it should be
Clowns are lame