The Moon Is Out - One Night Ultimate Werewolf Review 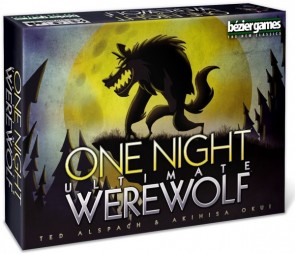 There is no genre of game with which I have quite the same love-hate relationship as traitor games. Part of this is just plain old burnout, since it’s a popular genre over the last several years and one that frequently is trotted out in large groups. The other part is that it’s a difficult genre to do well. It embraces a specific player personality, so they often struggle to be fun for someone besides the most outgoing and verbal person at the table. It’s also tricky to nail the right complexity level. Too much mechanical flourish, and the social component is stifled in a miasma of rules questions, as sometimes happened in heavily-expanded games of Battlestar Galactica. Not enough structure and they meander pointlessly, like the senseless Are You The Traitor?

To put it another way, the genre frequently struggles to find a balance between party activity and structured game. Nowhere is that struggle more apparent than in the old party favorite, Werewolf. A staple at parties in various forms well outside the gaming hobby, Werewolf exemplifies the shortcomings of traitor games while still managing to highlight some strengths. It’s a flukey game that might reward actual deduction and perceptive players, but it’s more likely susceptible to groupthink and arbitrary moments. But then it also embraces its own humanity and allows mob mentality to rule the day, which would probably happen in an actual traitor situation. An outgoing player can dominate the game, but such players are often punished for participation, as the whole group dogpiles on one suspicion. It’s a slippery game that I enjoy just enough to think about it, but not enough to play very often. I’ve been in too many endless sessions where every argument is circular, and I’ve seen someone voted out of the game (often early) for simply engaging with it.

But now we have One Night Ultimate Werewof, yet another iteration from Bezier Games, the publisher of Ted Alspach’s Ultimate Werewolf. There are some key differences here. For one thing, it lasts a single round. The roles are assigned, and in a single “night” round every role in the game wakes up and does a specific action, usually giving them some kind of information about the roles of other people. Another crucial difference is that there are actually more roles at play then there are players. Three of the role cards sit in the middle of the table unused, so there’s a possibility there won’t even be a traitor in the first place. After “night” has ended, there is a timed discussion where people hash out what they do and don’t know. At the end of the discussion, everyone votes for the person they think is the werewolf, and if the person with the most votes is a werewolf, the villagers win. Otherwise the werewolves are victorious.

I approached this game with a lot of skepticism, partially because of my relationship with its ancestor. But I was surprised that there are a couple of areas where One Night Ultimate Werewolf actually excels. The first good quality is the short length. I am not necessarily an advocate of shortening every game, but if we are honest the original Werewolf only has about 5-10 minutes of interest to it. While it’s true that removing the “boring” parts of a game can remove the contrast that makes the fun parts fun, in this case the short length is a definite boon. Since no one is voted out of the game, it doesn’t discourage people from participating for fear they will be disallowed from playing.

The other thing I love is how information is parsed out. In a regular game of Werewolf, there is a seer who can learn the role of one person per turn. This role is here as well, but the game throws some considerable static into the proceedings. The other rules, ones like the drunk, the thief, and the troublemaker, allow other players to swap cards after the seer has done their bit. Once everyone is awake no one can look at their roles again, so there’s a good possibility that you have a different role. This sounds like so much chaos that it would render the game completely meaningless, but because of the short nature of the game no one is too reluctant to share information they know, or to lie about such information when they think they need to. It at least allows you to get a good idea of what’s going on. In games like this information is the most important commodity, and One Night Ultimate Werewolf does a great job at spreading it around the table.

One Night Ultimate Werewolf smartphone app that is available for free on both iOS and Android systems. I was even able to find it for my Kindle Fire. I have never seen anyone playing the game without it. It’s not exactly necessary, but it does ensure that all of the roles are called out in the right order, and it has a game timer to keep the discussions from going on forever. It also means that you don’t need someone to play the role of moderator, which is nice. There has been a lot of talk about mobile devices being used more and more in game design, and this is the game where I have seen this trend most in evidence.

Is One Night Ultimate Werewolf a traitor game done right? I would say so, though we won’t know for a while if it has much longevity. That can be an issue in even the best the genre has to offer. But I’ve played about fifteen games, and I still want to play some more, which is more than most games manage, even short ones. Games with strong group dynamics like this one sometimes will reveal little squirrely mechanical elements when I’ve lived with them for a while, so I suppose that’s a risk. But then there’s a new expansion that recently made its Kickstarter goal, so clearly new content will not be in short supply. It deserves the attention, because it preserves the human aspects of Werewolf without being nearly as much of a chore to play, and without allowing things to travel down a spiraling path of meaningless argument. However long it lasts, One Night Ultimate Werewolf represents a pleasant surprise: a game that makes me realize we might not be altogether finished with traitors after all.