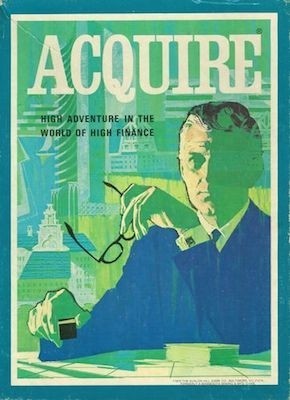 Playing Acquire is a little like meeting a fifty-year-old man who can outrun a bunch of twenty-somethings. Rather than showing its age, Sid Sackson’s classic feels as relevant today as ever. It’s a true evergreen title, one that has seen numerous publishers but has remained essentially unchanged since 1964. It’s one of only two hobby games, along with Settlers of Catan, that I can set up with just about any gaming group and never have to explain. I only ever have to teach it to people who don’t usually play games, and even then it’s intuitive enough to pick up quickly and challenging enough to entertain after decades.

The component quality has been all over the map, but the gameplay of Acquire is the same as it was 50 years ago. There’s a grid of numbered and lettered spaces on the board, and a matching tile for each one. Players take turns placing tiles on the board, representing hotels. If two tiles are adjacent, they form a new hotel chain, and that company is now available for players to purchase shares. If two established chains become adjacent, the smaller one is absorbed by the larger one. The player with the most shares of the smaller company gets a cash payout for their advantage, with the second-place player receiving a smaller one. You can then choose to sell the shares you have, trade them in for the new company at a 2:1 rate, or hold on to them in case someone starts the same company later in the game. Once one company becomes big enough or there are no companies that can be absorbed, the game can end, and each player counts out all the shares they own, any shareholder bonuses they are due, and cash on hand to see who is the wealthiest player.

There are a lot of fascinating things at work here, and the revolutionary nature of some elements has been dulled by the decades. One of the things that has always intrigued me is how Acquire blurs the concept of ownership in a game. Is this mine? Is it yours? This isn’t always hard to assess, but there are a lot of situations where it’s not completely obvious who is in the driver’s seat. Or think about the most common frame of reference when we talk about money in board games, which is of course Monopoly. That’s a game where ownership is explicit, and where the results are zero-sum. I win by taking all of your money. Acquire throws that idea out the window when it forces the player to make decisions that will actively help the other players. Today these are common design ideas in the German game movement, but I can only imagine how fresh they felt in 1964.

And yet even as it introduces concepts that would influence game design for years to come, Acquire still hasn’t really been eclipsed. It stands next to all of its descendants without a trace of nostalgia. There are still decisions in this game that are tricky. Do you start a company that will be more expensive and might prevent investors, or do you create the cheap company that might get investors but not give the same reward? How do you choose what stocks to buy? These are the kinds of decisions that are important, but never overwhelming. And crucially it’s a game that allows you to fail. If you invest poorly, not only will you lose, you will probably be broke for a long stretch of the game. This actually put me off the game for many years, but thankfully I gave it another chance and learned from my mistakes. I have played so many times, and yet it still manages to surprise me with its depth.

Acquire is often claimed by the hobbyist faction, and there is some truth to that, as its influence is still evident today. But calling Acquire a hobby game misses the fact that in 1964 there really wasn’t a board game hobby at all. It was not informed by forum posts on Boardgame Geek or /r/boardgames. Rather it was born in an era when all games were meant to be mainstream titles. The original publisher, 3M, used it as a flagship title for a line of bookcase games to appeal to adults. The graphic design of the original box shows the game set up on a table overlooking a skyline, like someone broke into Don Draper’s office to play. This was not something for people who obsess over box inserts and card sleeves. It looks more like it wants to appeal to people who play complex folk games like Bridge.

This makes Acquire an heirloom game. By that I mean it has been around long enough to be handed down on a family level. I have friends for whom Acquire was THE family game, even when their parents had no use for any other “hobby” title. It helps that there is a continuity to it. When you play the 2008 Avalon Hill edition, you are basically playing the same thing as the 1960s 3M version. For a game this old to make it so many years intact is almost unheard of, especially when it’s bounced between publishers.

It doesn’t matter whether you have the original 1964 version in the green bookshelf box, or the huge 1999 version with plastic skyscrapers that sells for a mint on eBay. Acquire is the rare game that transcends genre and the borders between gamer and non-gamer. The amazing thing is that it doesn’t just belong in the pantheon of the great board games, it still has a place on shelves and on the table.