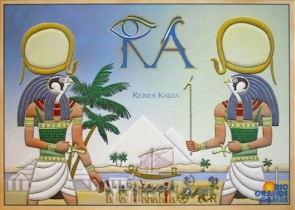 Although I spend a lot of time writing about old games, I’ve put off writing about Ra for a long time. This is because, unlike most of my favorite games, I struggled for a long time to put my finger exactly on what I love so much about Ra. Reiner Knizia’s classic was one of the first games I bought when I started collecting games, and over all those years I’ve always had a hard time defining why it works so well.

Part of this might be because it’s a game that works entirely on a mechanical level. I will go to bat for the thematic content of other Knizia games like Lord of the Rings and Tigris And Euphrates, but as far as I can tell Ra is resolutely abstract. It’s a game about auctions, with a coat of antiquity-colored paint. (In this is it similar to Taj Mahal, another great Knizia title from around fifteen years ago.) This doesn’t have to be a problem, but it does present some difficulty because I tend to connect with games on a conceptual level rather than a mechanical one. The mechanical core of Ra is so terrific that I find myself stepping back to watch it work, even while I lack the language I usually employ to talk about great games.

Ra is a design that has the good sense to give the player one of three simple choices every turn. The most common choice is to pull a tile out of a bag and add it to the offer of tiles available for auction. There are around ten different types of tiles that all score in a different way, and one other bearing the likeness of the sun god that starts an auction and acts like a game timer. Instead of drawing, you can “call Ra” and begin an auction. The auctions are once around the table, so you get one chance to bid. You pay with sun tokens, each with a fixed value numbering up to 13, or 16 with five players. When you win an auction the winning sun token moves to the middle of the board, and you take the one that was sitting there. It goes back to you face-down for the next phase or “epoch” of the game. Finally, you can spend a specific kind of tile to grab another single tile out of the offer. After enough “Ra” tiles are drawn, or when everyone is out of bidding tokens, the “epoch” is over and scoring takes place. After three epochs, the game is over and there’s some extra scoring that happens.

Ra is an auction game, but its quality isn’t where you expect it. It doesn’t really have any of those stand-offs and bidding wars that you see in other auction games. The auctions are all once around the table, and with some experience it becomes rather obvious who is likely to bid on what. It’s open information who has which bidding token and what they have already won in auction, so it’s pretty easy to gauge a lot’s value to the other players. Two things keep the auction from being kind of tedious. First of all the players have a lot of control over when an auction will actually start. Calling “Ra” is a great way for players to dictate what is going up for auction, or at least how much of it there will be. If you have a lot of lousy sun tokens, calling “Ra” is the one way you can dictate whether you’ll be able to bid on anything at all. Doing so on small lots means that either you can pick up something cheap, or that a higher token will be taken out of rotation for the epoch.

The second mitigating factor that prevents the auction from stagnating is that enormous bag of tiles. It took me seven years to realize what a great mechanic the tile draw actually is. First of all, it does a great job of randomizing what you can bid on. That seems like an obvious point, but when there are so many different tiles that score differently it does a great job of diversifying the players and their needs. Not only are there good tiles, but there are a few “disaster tiles” that force the winner to discard specific types of tiles. If you don’t have those tiles you don’t have to do anything, so that’s just one more way the game puts the players in different lanes right away.

But more than that, the tile draw puts some terrific pressure on the players to act. Since you only have a few tokens to spend on auctions, the tendency is to be conservative with bids. The problem is that the Ra tiles that come out and cause auctions are plentiful, and sometimes they come out very quickly. Enough of them will end the round before you can do something meaningful, so waiting too long will generally result in not getting anything. It also allows for terrific moments when only one player has bidding tokens available, and they keep drawing tiles so they can get an enormous windfall. Of course by that time it only takes one or two Ra tiles to end the epoch, so there’s a great bit of push-your-luck at work.

It’s a situation where one element folds into another, which then leads to a new mechanic, and then circles back around again. As designs go it’s basically seamless, which is an impressive achievement without a thematic context to cover the wires. The only part that does draw some attention to itself is the scoring, because it’s one of the few things that doesn’t just fall into place effortlessly. These days when I teach the game I compare it to 7 Wonders, which is basically a version of Ra that replaces the auction with a card draft. Thankfully most versions of Ra have a scoring summary printed right on the board which makes it easy enough to remember. Smarty-pants scoring conventions are par for the course with Knizia, and I think it works very well here. But it does end up being the one bit of learning curve in the design.

Like most successful Euro designs, Ra has been re-implemented a number of times. It was made into a well-received dice game, and given an alternate version in Priests of Ra. Both have their fans, but I must confess that I find the original game good enough that any other version is redundant. Fifteen years old and Ra still feels sharp as anything Knizia, or anyone else, has designed.