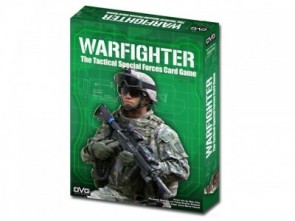 “The rush of battle is a potent and often lethal addiction, for war is a drug.” -Chris Hedges

I can’t tell you about war, but I can tell you that Warfighter is absolutely one of the most addictive substances you will find in the market.  This unassuming Kickstarter wargame from Dan Verssen Games exploded onto the scene last month and has quickly become one of their best-selling titles.  This is a marquee release that in time will come to be known as the best thing the company has ever published.  Hornet Leader and Thunderbolt Apache Leader are great games, but they’re no Warfighter.

In Warfighter you take control of a contemporary fireteam of roughly 1-5 Special Forces operatives, outfit them with many gear options, and then tackle one of several missions as you maneuver your highly skilled force through the suffocating jungle or claustrophobic Middle Eastern streets.  This is a card game that features hand management and dice rolling with linear progression through locations as you approach your objective and eliminate hostiles along the way.  It’s visceral and tense in a way that evokes its subject matter masterfully.

The mechanisms used come across as an amalgam of influences including elements borrowed from Up Front, Space Hulk: Death Angel, and the previously released titles in DVG’s Leader series.  You start off by selecting your Mission/Objective cards which give you a set number of Operation points to spend.  You use these points to purchase Soldiers, equipment, and skills.  This is very similar to Hornet Leader/Thunderbolt Apache Leader mechanically but there’s some clever differences here in tone and color that are substantial.  Instead of outfitting face-less Aircraft, you’re fielding soldiers with personality and real-world names.  You’re not selecting a generic Mk.II bomb or a Sidewinder Missile but an M4 with underslung M203 grenade launcher, or a Benelli shotgun, even smoke grenades, optics and many other options.  This weaponry and equipment is more strongly engrained in the contemporary zeitgeist of film and video games and hits closer to home in terms of realization.  It’s more satisfying and feels almost like a Roleplaying game as you outfit your warriors and even assign skills to boost their performance.  This provides for a more satisfying and colorful interaction than that of its predecessors.

Each Soldier is accompanied with a hand of Action cards which provide a myriad of options.  Your hand size is limited to the health of the soldier and there’s a nice tension in evaluating the right moment to best utilize your options.  Playing Action Cards is typically free, as your troops will spend their limited actions moving to new Locations, firing their weapons, or reloading a dry mag.  New Location cards arise in the Action deck and you must play them from your hand in order to build a linear path for your fireteam to move towards the objective that is a set distance from your starting point.  This is similar to the card based location system of Space Hulk: Death Angel but it feels more alive and fluid as the locations form a visual path on the table in front of you like a series of scenes from an exceptional war film.  You’re also able to move back and forth or fire between locations unlike Death Angel.  This provides for a less claustrophobic feel and a greater sense of strategy and evaluation.

This was designed as a Cooperative game and works exceptionally well in that regard.  One element of possible worry was that the Coop play was tacked on to a solo game at heart, and that’s just not the case.  Each player will have a separate and distinct soldier, their own hand of cards, and will need to keep open lines of communication between him and his teammates if they want to survive.  A vast majority of the Action cards can be played on other players so there’s a give and take and constant pressure to maximize your resources.  Soldiers also accumulate experience from taking out hostiles and they may spend this XP to boost the effects on many cards.  The catch is that anyone can cough up the experience, not just the player actually throwing down the card.  This is another nod to cooperation and brings about that sense of relying on others to help get the job done.

Despite the fact that this is a proper Coop, Warfighter plays astoundingly well solo.  This is accomplished through a clever use of Non-Player Soldiers and Squad soldiers.  It can be difficult managing multiple regular Soldiers solo as each has their own hand of cards and you can get overwhelmed quickly if playing with a larger fireteam.  To alleviate this you can spend Operation points on NPS or Squaddies when building your team.  Non-Player Soldiers function similar to your regular soldiers but come with pre-assigned equipment and don’t possess a hand of Action cards.  Squad soldiers are similar but their gear and equipment are abstracted away and they simply possess a set attack value based on their health.  Both of these options sound perhaps kind of kludgy but they blend seamlessly into the design and offer more freedom and choice to draw the perfect Warfighter experience for your needs.

The most surprising and unexpectedly satisfying aspect of this design is the unbelievably rich narrative.  As you play through a mission and build the path to your location a hearty and enthralling story will arise organically from the experience.  Your soldiers will trudge through a muddy river where you’re ambushed by Drug Runners, Giacomelli will suffer a nasty wound and your squad will have to high tail it into the village where they’re vulnerable to ambush and are set upon by an RPG team.  As they line up their rocket you’ll hit ‘em with suppressive fire while Rowe sneaks up to their position and tosses a frag grenade taking them out.  In just a few minutes with a handful of cards you’re experiencing a very memorable and bright narrative that easily alights your imagination and brings a hearty smile to your face.

Building narrative in a natural and unobtrusive way is quite difficult.  There’s a delicate balance between abstraction and detail and many games with strong story prose suffer from being bogged down in overwrought mechanics.  Warfighter gets the mix just right as necessary components such as reloading, taking cover, and opening up with full automatic fire are given just enough detail to ignite your imagination but never obtrude on the overall structure or flow.  It’s rare that a game nails it quite as sharply as Warfighter has and it’s the single most brilliant aspect of the game.

One enormous aspect this game has going in its favor is the setting.  There’s such a wealth of film covering similar topics that most of us will still have scenes from Blackhawk Down, Hurt Locker, or Generation Kill imprinted in our brain just waiting to be teased out.  Warfighter can’t help but lean on these influences hard and to great effect.  In addition to the distinct location and hostile choices, we’re given a gentle narrative prod with the clever choice of events that crop up in the hostile deck.  While the bulk of obstacles are enemies with AKs and SMGs, you will run into stuff like your team getting lost or getting mired in rough terrain.  It’s a small touch, one that many people may overlook but these events are paramount to supporting and fleshing out the story you’re building at the table.  All of these elements in unison combine to make a whole that is greater than the sum of its parts akin to Lion Force Voltron assembling to form their namesake.

This is a game that has snuck its way into 2014 and in a just world would stealth its way onto a bevy of top 10 of the year lists.  If you value narrative, tense action, and quick yet satisfying tactical decision points you need this game.  Warfighter is cardboard heroin of the most potent variety and you will be hanging your head in shame if you box out the peer pressure on this one.