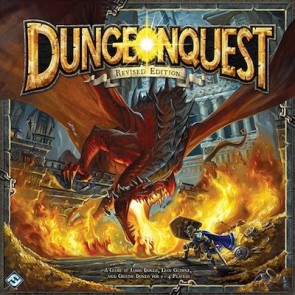 Fantasy Flight’s third edition of the classic fantasy game Dungeonquest came out in 2010, and four years out it certainly feels like a turning point in the popular narrative of the company. The changes they made to a very simple game were indeed divisive, and almost all of the criticism centered around the revamped combat. Whatever damage you feel FFG did to Dungeonquest, it’s obvious now that the greatest damage was to Fantasy Flight’s brand. As a company they have always been willing to rework classic games to bear FFG’s distinctive mark, but up until Dungeonquest this was largely tolerated. Both Arkham Horror and Fury of Dracula were drastically changed from their original forms, but were warmly received regardless. But after Dungeonquest, every Fantasy Flight reprint is immediately met with suspicion from the game’s fans. It’s the exact opposite of how such announcements were received prior to Dungeonquest’s release.

Whether this narrative is actually fair or not is immaterial. It’s there and Fantasy Flight clearly sees it, because this year they released a “Revised Edition” of Dungeonquest. This represents the logical conclusion to a series of backpedals made by FFG after the third edition came out. First there was a downloadable PDF to allow players to reinstate the classic combat if they wanted to. Eventually these variants were folded into later printings of the rulebook. This has culminated in the revised edition simply removing the reworked combat entirely and replacing it with the combat from classic editions. It feels like an admission of wrongdoing, one that has improved their version of Dungeonquest considerably.

(Note that FFG released a downloadable conversion pack for owners of the third edition, to allow them to upgrade their sets to the revised ruleset with a minimal investment. This is what I did, along with printing out the new ruleset, so I haven’t actually played the revised version as published.)

I’ve was all over the place on the revamped combat from the third edition. FFG’s version served as my introduction to Dungeonquest, so I didn’t have any attachment to how it used to be. My initial response to the new combat was largely one of acceptance. I still feel that it works well in a vaccuum, but it feels oddly out of place in the context of Dungeonquest, which is in the end a pretty goofy game. Tellingly it took up a startling percentage of the original FFG ruleset, which was already verbose. I eventually embraced the alternate combat systems, particularly the dice combat, which didn’t require me to jury-rig existing components to recreate a version of something I wasn’t nostalgic about in the first place.

The revised edition restores the combat that existed in Dungeonquest until FFG republished it, a simple rock-paper-scissors affair. Now that it’s the “official” solution it has become my preferred way to conduct combat. If this makes me sound fickle, it’s only because combat isn’t really the point of Dungeonquest in the first place. In a game designed to kill characters as quickly as possible, it’s just another way for that to happen. The rejiggered combat from third edition inserted lots of decision points and second guessing into the process, bringing with it more rules and setup. If you wanted decisions, that’s great. But I’d wager most Dungeonquest players feel like I eventually felt, that they mostly just wanted the game to get out of the way. In essence the “strategic” combat was an answer to a problem that didn’t really exist for me in the first place.

There are some other positive changes in the revised edition as well. One that I really enjoy is that rooms are now only searchable once. If a revolving room sticks you against a wall, you have one chance to search for a secret door before you rot in a sealed room forever. It ups the deadliness of the game a little more, which is the whole reason I play Dungeonquest in the first place. The other really smart move was a full-scale rewrite of the rules to bring them closer in line with how FFG has been doing rulebooks recently. This means that it’s actually divided into two books, one with the rules and another for easy reference of game terms. This was an approach utilized in the much more complicated Eldritch Horror, and it actually makes the game much easier to digest. The rulebook is much leaner and more direct, and I can see the reference guide being handy for people who don’t have a lot of experience learning games. It’s a move to make the game more approachable, and it’s one I applaud.

All of these changes have led to a bit of rediscovery for me, which I hadn’t played in a while until this year. I don’t play Dungeonquest for the same reasons I play other games. At its heart Dungeonquest is a comedy more than it is an adventure, one where the player is usually the butt of the joke. This is baffling to people whose primary reason to play a game is intellectual stimulation, as well as to people who want immersion and narrative. As much as the game stands in opposition to planning and strategy, it also stands in contrast to most fantasy games and stories. So many fantasy stories revolve around a chosen hero who is special in some way, and is able to overcome the odds due to something within themselves that sets them apart from those who came before. In the world of Dungeonquest this trope is popped like a balloon. There is no “chosen one,” merely a parade of unqualified adventurers who will all be killed eventually unless dumb luck intervenes. A player doesn’t win because they are special, they win because they are lucky. Fantasy Flight’s third edition combat didn’t embrace that idea, which is probably why it felt like a violation to so many fans. The people who liked the third edition combat will be disappointed by the revised edition, but Fantasy Flight has focused their version considerably and clarified the thematic content (if I could be permitted to talk about thematic content with a game as absurd as this one).

Whether anyone is still paying attention is anyone’s guess. A couple of elements introduced by FFG remain, like the Terrinoth setting that was added to bring the game in line with Descent and Runewars. I get the impression that any combination of “Fantasy Flight” and “Dungeonquest” in the same sentence is enough to drive off some people no matter the actual content. That’d be a shame, because Fantasy Flight has done good work here. It’s a version of Dungeonquest that feels less at war with itself, and has emphasized the absurd satirical edge of the design. I hope that it will do what the best Fantasy Flight reprints have done, creating new fans of a classic game that deserves our attention.