The Battle Of Five Armies Review 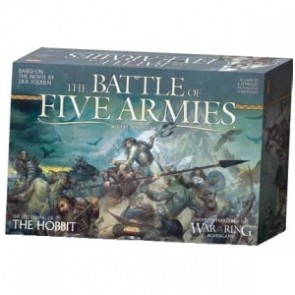 “Then something Tookish woke up inside him, and he wished to go and see the great mountains, and hear the pine-trees and the waterfalls, and explore the caves, and wear a sword instead of a walking-stick.”

The Battle Of Five Armies is a game that invites adventure and bristling hope as your warriors clash against the mountain-side, spill their blood in the valley, and have their say in the fate of the free peoples that has been thrown into peril.  This game has been a homecoming of sorts for me as I've never quite managed to experience War of the Ring, so I approached The Battle Of Five Armies with pent-up expectations and bated breath.  As Gandalf scorched my dark minions leaving charred black flesh on the countryside or hideous vampire-bats dug and clawed into my furrowed Dwarven eye-sockets - the game damn well delivered with fanfare and blasting horns.

When pouring over the beautiful board, leafing through the large pile of cards, or fondling the excellent miniatures like the one ring you will quickly realize that Ares games has gone all out.  This is a huge production that is primarily focused on reverence and respect for the source material.  It takes J.R.R. Tolkien's work and brings it into the cardboard realm with class and panache.  The way the different units function, the unexpected drama, and the enormously satisfying mechanisms behind the numerous heroes make for a game of emotional excitement and lasting investment.

The core strategic system of rolling several dice which dictate the options you may perform on your turn is executed with the level of refinement you'd expect after seeing this mechanic first utilized in War of the Ring.  Some turns the dice will taunt you as all you are able to do is muster troops or draw cards and you will have to roll with the punches.  The dice pools are large enough that typically you're afforded a pretty strong range of options, but the game still stresses this over-arching mechanical narrative of make the best with what you have.  You must optimize tactical choices while keeping those strategic considerations in mind and this provides for a meaty and satisfying experience.

The Shadow Army is up against the clock as they must gather their forces of darkness and advance upon the conglomeration of foreign allies in order to overwhelm before the extraordinarily effective heroes enter play.  Each turn the Fate Track stands to advance 1 or more spaces due to a tile draw and at different prescribed points on the track the Free Peoples gain access to a new hero.  The way the Fate tile draw works is one of the more interesting mechanisms as it takes advantage of a push your luck element that often births moments of vocal celebration or pain.  The Shadow player draws a random Fate tile and then may discard it to redraw if he wishes.  The catch is that you can only re-draw if the Free Peoples player decides to activate more than 1 of their generals.  Specific special characters act as generals on the Free Peoples side and they are granted additional abilities if they receive an activation token.  So both sides kind of play this risk/reward game of choosing to take more at the risk of it biting them in their haunches.  It makes for a small moment of excitement integrated into the strategy that is one of the many bright spots in this design.

The tempo of the game is formulated due to the back and forth of each side executing a single one of their action dice they rolled at the beginning of the round.  Both sides will wish to muster more troops, move troops they already have on the board, and fight wherever their numbers allow victory.  The vast asymmetry of the design appears in these actions in addition to the units available, as the Free Peoples' dice boast a wild symbol but the Shadows player's dice possess a Lidless Eye.  This symbol is used to great effect to spur the Goblins climb over the surrounding mountains as they look to descend upon the valley and wreak havoc in a massive strategic flanking maneuver.  Small touches like this show the design team's focus is in the right place.

While the strategic framework is solid and a huge selling point, the battle system is really the touchstone element as the game at its heart is a series of small conflicts as you attempt to shift momentum and deliver carnage.  The conflict is spurred via small pools of dice with card-play being an integral facet of modifying the results and tweaking the outcome.  Each type of unit in the game (Wargs, Great Orcs, Men, Elves, etc.) has their own Unit Card which grants a special effect.  Both sides choose one card for each round of battle and then you roll a specific number of black colored standard six-siders depending on the number of units from your card you have participating in the battle.  If you score at least one hit on the black dice you trigger the bonus effect which can be devastating.  The unit effects typically are strong and evocative from a setting perspective - Wargs tend to chase down opponents with low morale while Dwarves are stout and resilient.  Each unit has style and provides for effective tactical considerations.

Another great facet of the battle system is a simple and elegant approach to terrain.  The map pictures different regions with hills, mountains, plains, and swamp.  Each side takes the unit they have the most of in the battle and compares the terrain type they possess to their opponent's - if either possess the terrain type of the area you are fighting in you get to draw extra cards which may affect the battle or be utilized when executing one of your action dice.  It's a simple and easy to resolve system that doesn't have an overbearing effect on the game.

The final element of battles is the inclusion of heroes and leadership tokens.  Each side places a number of leadership tokens on different armies at the beginning of the turn.  When rolling dice in a struggle, each side may re-roll a number of dice equal to their leadership.  Leadership is comprised of 1 for each token plus the total leadership from heroes accompanying the unit.  This is hugely powerful as armies with leadership can trounce a larger poorly led force.  Thematically this really works with Tolkien's narrative as we see an enormous effect from notable characters in his stories.

This game is one of the richest I own in terms of bringing about a sense of theme while integrating outside source material.  The heroes all function in appropriate and clever ways as you find Bilbo disappearing from combat as he places the ring on his finger or Beorn acting as an army unto himself and tearing through much larger forces.  I also love how they treat Thorin, penalizing The Free Peoples if he moves away from the Front Gate which is perfect when comparing to his personal struggle to leave his post in The Hobbit.  The Great Eagles and Bats swooping in, Gandalf tearing it up, and Bolg at the fore of the black army all just deliver on the promise of the definitive Battle of Five Armies game.

This is a great game.  I can't help but speculate that buzz has kind of fell off mostly due to this title's appeal residing explicitly in those who already own War of the Ring.  While this doesn't have quite the epic scope War of the Ring has, Battle of Five Armies is an immensely enjoyable strategy game of resounding narrative and utmost reverence.  Despite the fact that this is a middle-weight two player game that will be difficult to get off the shelf for my gaming lifestyle, I cannot help but grasp this one with a firm two hands and appreciate all of the small touches which contribute to the greater whole.  This fantastic game delivers on the climax of The Hobbit in grand style and it's deserving of a fate that's far greater than it's gotten thus far.