Your Head Asplode - The Battle At Kemble's Cascade Review 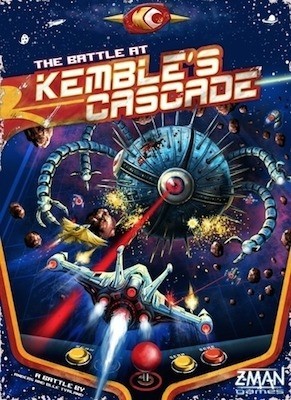 I’m not a game designer, so I’m not really sure what it takes to create a successful board game adaptation of a video game. Do you just take the license and use it as a setting for a solid design? That’s what was done with Railroad Tycoon and Age of Empires III, both by Glenn Drover. Do you work to create a system that emulates the feel of a video game without recreating specific mechanisms? FFG’s Starcraft board game did this to great effect, creating a game that felt like Starcraft even while it never really replicated the mechanical nuances. Or you could do what The Battle At Kemble’s Cascade does, and work hard to recreate the mechanics of the video game in a cardboard form.

The Battle At Kemble’s Cascade is heavily inspired by shoot-em-up (or “shmup”) video games like Galaga, games where a spaceship dodges through a starry background, blasting alien invaders and collecting power-ups until you face a boss at the end. There have been plenty of newer shmups like Jamestown and Ikaruga, but the genre was in its heyday in the days of arcade cabinets and tokens. Kemble’s Cascade does its best to recreate the particulars of the genre. The board is composed of rows of cards that “scroll” down like a conveyor belt. The players each have to navigate through obstacles like enemy ships and asteroids, until you get to the end and face a huge boss. Defeating enemies gives players rewards like power-up cards and currency to purchase ship improvements.

Probably my favorite mechanical flourish here is the scrolling battlefield. Kemble’s Cascade bends over backwards to set the scene visually, and the scrolling field does so as effectively as anything else. Not only that, but it works without too much mechanical fuss, which is an accomplishment in a game that seeks to emulate a more complex experience. I also really like the ability to customize your ship with weapons and upgrades. I’m not sure what thematic sense it makes to be able to mount a flamethrower in the middle of battle, or even how one would effectively use a flamethrower in deep space, but no matter. It’s cool enough on its own to overcome its silliness. Crucially each player only has a few slots and not a lot of resources to buy stuff. That means that you don’t get tank ships with a little of everything. Everyone feels different after a bit of game has passed. Such customization appeals to me immensely, and I enjoyed tuning my ship to my tastes.

Dodging things like enemy fire and obstacles is a crucial part of shmups, and Kemble’s Cascade handles this with a fascinating system called threat. Depending on where you begin your turn, your ship begins with a certain amount of “threat” attached to it. As you take your turn, you reduce that threat by one for every move you make. Any unresolved threat at the end of your turn is taken as damage. As an abstracted way to deal with dodging enemy fire it works pretty well. The downside is that threat is tracked on a little slider on your board, and every move requires you to adjust the slider. It’s an easy step to forget, but one that really has to be remembered if a player can have any chance.

There are a couple little elements in Kemble’s Cascade like that, bits that aren’t too frustrating in theory but in practice are much more annoying. Tracking threat is probably the biggest culprit. It interrupts the basic flow of the player’s turn, which in my book is a big no-no. I’m trying to think of a way to describe it that doesn’t make me sound like a whiner, since it doesn’t seem so bad from a distance. But I can’t tell you how many turns we had to backpedal to figure out where the threat should be, or the times we began someone else’s turn without ever calculating the previous player’s threat total.

The other irritating aspect are the missions and achievements. These are cards that give you points for doing stuff around the board. The usual requirements are often pretty silly (I get points for blowing up?) but the real problem is that they seem to exist outside of the main action of the game. They aren’t really integrated into everything else in a way that makes them feel vital. Put another way, we constantly forgot about them. There was a lot of times when we realized someone had fulfilled an achievement several turns later, or when someone forgot to mark off several levels of their personal missions. Neither is inherently a problem, but they both feel gamey and unnecessary.

The fundamental issue, however, is that the player is always in control. There are no nasty surprises that the player won’t be able to handle in a couple of turns. There are new obstacles that enter at the top of the scrolling field, but usually they are a couple of rows away, giving players a chance to prepare. You meticulously plot your route to make the most of what you have and move efficiently. I don’t think this is a problem in a normal space-fighting game, but it’s a big issue if you’re emulating a video game experience. In a game like Galaga, you are not able to plan a move as precisely an meticulously as you want, because it’s all happening in real time. The twitchy nature, where you make a wrong move or screw up your combo, is completely missing from Kemble’s Cascade. A good shot of luck or chaos would go much further towards approximating that real time element. It wouldn’t be as strategic, but it would feel truer to its inspiration.

It’s this last bit that has effectively killed my interest in The Battle At Kemble’s Cascade. It has a lot of the trappings of a shmup, but they are mostly on the surface. The basic feel of the genre, the sweaty-palm action and frantic pace, are completely absent. This wouldn’t bother me so much, except the game sells that inspiration really hard. The cover is framed as an arcade cabinet, complete with a joystick and buttons. All the art is is rendered in lovely pixel graphics. This game is working overtime to evoke a specific style of game. What it came up with will likely appeal to a lot of gamers, but as a recreation of a specific video game genre it falls short.