Tiny Epic Kingdoms - Farming In A Land Of Oxymorons 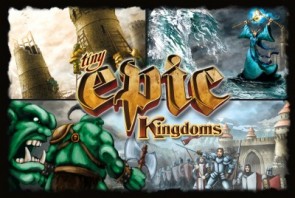 A critical look at Gamelyn Games' Tiny Epic Kingdoms.  Can a 4X fantasy game really thrive in a 30 minute playtime and pint-sized package?

While the Micro game fad is slowly dying off due to a choking deluge of force-fed AEG cloth bags, Gamelyn Games is still kicking up dust and swallowing kickstarter backer’s money like a Dyson DC50.  After the success of Tiny Epic Kingdoms we soon saw Tiny Epic Defenders rake it in and are seeing the rapid success of Tiny Epic Galaxies at this very moment; Scott Almes may be stuck in this oxymoron realm for the remainder of his designer lifespan.

Tiny Epic Kingdoms isn’t exactly a micro game, rather, it’s just a small one.  The game comes with a couple dozen tokens and a pile of oversized cards that make up the map/board as well as detail the numerous racial powers present for each of the factions.  The “Tiny Epic” size direction seems completely arbitrary and a bit gimmicky.  Having a smaller footprint isn’t a bad goal, however, you lose some of the function and pleasant tactile nature by shrinking everything down to a miniscule level.  There is also a side benefit as It tends to afford lower expectations and a wider range of acceptance when you have a smallish quick playing game as opposed to a full production.

On the surface this is a well-designed, solidly developed game that features a smooth flow of actions and is quickly grasped by the participants.  Players start with a card in front of them bearing several different regions that each boast a single resource on offer.  You place meeples on your card, spread to other player’s cards, build towers, and advance your race.  Much of this is abstracted as building your infrastructure is represented by moving a token up and earning more victory points for the end of game.  Racial powers are quite varied as you spend mana to research and advance up your faction’s track to unlock new powers and earn more VP.  The mechanical and strategic curve of these actions is somewhat flattened to account for the 30 minute playtime and reduced scale.

The flow of a turn is similar to an action selection game like Puerto Rico or Twilight Imperium 3.  The difference here is that each player takes a turn selecting an action that hasn’t been selected yet, such as increasing their population or moving their meeples around, but doesn’t receive an additional benefit for actually making the choice.  The player who made the selection performs the action as is and then each player is given the option to perform the same action or to instead gather resources with all of their meeples.  This works incredibly well to keep the pace lively and to drastically cut out and simplify much of the logistical meat of a proper 4X game.  By shifting the necessity of acquiring resources to a simple pass action you can cut out an entire additional phase or action system from the mechanisms and streamline the entire game.

The problem with the core action selection system is the same problem that undermines nearly the entire design – Tiny Epic Kingdoms is too soft.  The beauty of the action selection mechanism in other more prolific designs is that the person who makes the choice is usually rewarded with increased benefit while others simply perform a more basic action.  Additionally, the mechanic supports depth through attempting to leech off other players hoping they will select the action you want so you don’t have to.  Tiny Epic Kingdoms lacks the teeth behind this decision process because all but one action will occur every single round.  It also saps some of the dynamism out of the mechanism by completely nullifying your ability to select an action no one will benefit from because they can always gather resources instead, which of course is always beneficial.  So you may select build to increase your towers realizing no one else has stone and won’t be able to take advantage, however, everyone else will merely perform the gather resources alternative and rocket up their mana or food allowing them to further their own agenda despite your attempted clever play.

Combat suffers a similar fate as it appears pretty interesting and dynamic on the surface, but proves a bit too weak and counter-productive with repeated plays.  The system is similar to that found in Dune as each player has a die that they set to a hidden value.  They may opt to set it to the white flag and declare a peaceful alliance, but if their opponent sets it to a higher value they will automatically lose.  The value you choose on your die must be paid for with resources (Stone or Food) and can be extremely costly as both sides lose whatever they bid, regardless of the result.  What this means is that if you engage another player in combat and you both bid several resources, it will immediately place downward pressure as everyone else at the table ekes out a net resource gain on both participants.  The benefits of winning a conflict are eliminating the enemy’s meeple (although it can be brought back later) and claiming the region for yourself.  The fact that you gave up an action and possibly several resources to do this while Jeremy and Bill took the gather resources action and each increased their warehouses means warfare comes at a premium and is often ignored or at least relegated to being very situational.

The bottom line is that Tiny Epic Kingdoms advertises itself as a 4X game but in order to achieve this in a filler’s time frame many of the greatest strengths of the genre had to be filed off.  The game plays more like a slick Euro but lacks tension and strategic depth that is necessary for this type of game to work.  There are several clever touches which almost bring it up out of its grave such as the large number of unique races and intelligent board layout via cards, but it’s never enough to overcome the soft underbelly and general lack of excitement and color.

Tiny Epic Kingdoms doesn’t quite live up to its rolling hype and anyone looking for a true 4X experience in a filler time frame needs to head elsewhere.  If you’re willing to sand down a couple of the X’s and don’t mind a lack of meaningful interaction this could certainly be good enough for you.  For me, I think it ultimately comes down to the fact that Tiny and Epic are at odds and can’t be reconciled in this format.