Two Helpings Of Martin Wallace And A Touch Of Warfighter 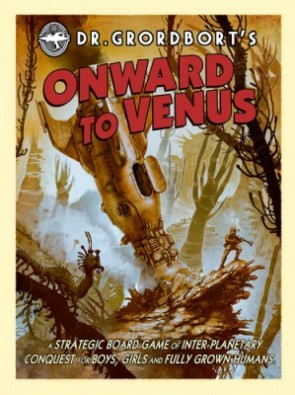 Discussion of Onward To Venus, Mythotopia, and the Warfighter expansions.  Also some game of the year discussion for 2013 and 2014.

Martin Wallace is a strange bird for me. I don’t enjoy many of his heavier dry Euros but I fell in love with A Few Acres Of Snow when it was released. A Study Of Emerald is a game I’m quite sure I’d also dig if I ever get a chance to play it, which is doubtful in its original form. I have a great deal of respect for Wallace as a designer as he kind of marches to the beat of his own drum, taking on sometimes different projects and he has a penchant for often surprising us.

Onward To Venus was one such surprise for me as I find my expectations for all that is steam punk to be dwindling. Despite this I found the color and narrative of the game to be quite remarkable. Everything hangs together extremely well and the graphic design and artwork is something to behold.
Mechanically it’s kind of a worker placement/dudes on a map-ish game with some area control scoring elements. It feels very unique and I’d have a hard time making a direct comparison to any current or past title. This is definitely worth a shot if you get a chance to play it and don’t have a difficult time with some of the caveats I mention in the review.

Mythotopia is an altogether different animal as it came with much anticipation and I was extremely hopeful. The integration of a deckbuilding with strategic conflict integration really gets me going and it’s something that really elevates the fantastic Starcraft to another level. Of course the deckbuilding in Mythotopia is directly descended from A Few Acres Of Snow and is much more centralized and core to the engine than the aforementioned FFG titan.

This very much is A Few Acres Of Snow 2.0 as the exact same turn structure of performing 2 actions while utilizing your hand is present. There are plenty of new twists and wrinkles and Wallace certainly didn’t mail it in. The majority of this game is vibrant, engaging, and even perhaps Game of the Year material. There is a vocal minority in the design that really drags its feet through the mud and keeps the title from elevating itself. It’s not something that you can easily ignore and whether you can live with it or not will depend on your expectations and ability to cope.

I mentioned in a recent forum post that I tend to reflect on my top releases after a subsequent year has passed so the dust can settle and I can more accurately assess what has stayed and what has been jettisoned from my shelf. At this time I’d normally be assessing 2013 but it comes down to one simple fact – it was a very weak year for gaming. The only game still in my collection from that year is Rampage, which I’m definitely a fan of. Most everything else disappointed or never met expectations and I quickly moved on. Firefly is too rote, dull, and devoid of life. Eldritch Horror never stuck with me. Euphoria is solid but never quite grabbed me. Space Cadets: Dice Duel can be great fun and in some ways fantastic but I have too hard of a time getting it to the table so it recently got sold off. Freedom: The Underground Railroad was a fantastic design that I have a lot of respect for but it’s something I don’t feel like pulling out after playing it half a dozen times. So, I guess Rampage gets the win in a one horse race.

To come full circle and get to what I really want to talk about is Warfighter. I love Warfighter. It’s too early now but if I had to give you a game of the year for 2014 it’d be Warfighter hands down. I’ve tore into The Mushroom Eaters twice now and think it is unbelievably fantastic and presents a completely unique experience in a way only Nate Hayden could dream – but Warfighter is the game that won’t leave my solo table and that I can’t quit pushing on others. Mushroom Eaters would probably win the Academy Award but Warfighter will take the gross.

We’ll see if my opinion holds up long term but I don’t see my enthusiasm waning. Having integrated the 3 content expansions I’m only finding the options and variety skyrocket. Dan Verssen hit it out of the park and I can’t wait for more of those magazine-sized card boxes.