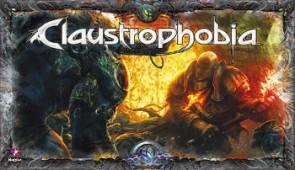 Game Name
Publisher
Asmodee Editions
There Will Be Games

Back in the days before Space Hulk was common as muck, gamers spent a lot of time and energy discussing possible replacements. Claustrophobia was a game that got mentioned a lot in those conversations, and I never understood why. Not because it was a bad title, but because it shares almost nothing with Space Hulk other than asymmetry, a collection of finely sculpted figures and some six-sided dice.

Instead of a pre-set grid, Claustrophobia has a randomly drawn series of dungeon tiles on which the precise positioning of your forces is meaningless. It's virtually all melee, with ranged combat restricted to the occasional "blunderbuss" card that has a range of precisely one tile. Cards feature heavily in Claustrophobia and not at all in Space Hulk. I could go on.

So, as you might expect, the two games play quite differently too. And this is to the advantage of Claustrophobia, which is a more accessible and open-ended game. It might share a scenario-based setup with its venerable competitor. But that random stack of dungeon tiles lends a new level of replayability, and a real sense of exploration and excitement to the game.

Beyond that, this is the territory where you can see why these two quite different games draw such frequent comparisons. Because while the mechanics might be dissimilar, the two games feel alike in play. They're tight. Tense. Liable to turn dramatically on a single dice roll. That sensation of being only a whisker away from physically grappling with your opponent as you ride the currents of fate toward victory or defeat.

Claustrophobia demands attention. With painted miniatures out of the box and stunning art depicting a hellish underworld on the tiles, it's one of the most visually arresting games I've ever seen. Given the price point, the value for what it packs in the box is incredible. Once laid out and in play the action is relentless, the turns quick, the combat brutal. Many of the six scenarios in the base game regularly go down to the wire.

The game is based on a role-playing title in which 18th century religious warriors descend into hell itself to battle the forces of Satan. Only the humans can explore new tiles, and demons can only appear on existing tiles, empty of human warriors and with unexplored exits. Because of this, games often have the feel of a rolling pursuit. The noble explorers pushing deeper into the bowels of hell to fulfil some objective before the baying hordes of troglodytes run them to ground. It's often every bit of thrilling as it sounds.

Both players start the turn by rolling a fistful of dice and using it to set up their forces. For the human player, the dice assigned to a warrior determines their stats for the turn and, if they're wounded, whether they can act at all. For the demon player the dice collect tokens, cards and special powers which are then used to summon and equip the hellish forces.

With combat a matter of more dice, hitting on any result higher than the targets' defence score, you'd be forgiven for thinking this is a crapshoot. Not least because it can turn out that way, although that's a limited problem when the game runs under an hour. But the slick rules are full of little flourishes that simplify, shave and tighten the game to get as much theme and strategy as possible out of so much chaos. It's all about risk management. Clever players will find ways to tip the odds in their favour, yet the game never loses that sense that both sides are teetering on the edge of victory.

The game does lack a little in variety. The card decks aren't very big, and while there's a lot of tiles only a few of them have special rules to spice things up. The human player gets three different troop types and the demon player only two, although one of them has different stats in each scenario. Although if you get fed up with the ones provided in the base game, there's a bunch more you can download.

The first expansion for the game, De Profundis, goes a long way toward ameliorating these issues. It expands the card and tile stacks and gives the human player a new warrior type with a varied skill set dependent on the scenario. More significantly it gives the demon player hellhounds, units with variable stats based on an assigned dice, like human figures. These give even more tactical choice to both players. There's also twelve new scenarios using these new elements which are every bit as good as those in the original.

But in an infuriating choice by the designer, all this cool new stuff has been declared to be incompatible with those base game scenarios. And there's no symbol on the expansion cards and tiles to easily identify them. So if you've been playing with the expansion and want to go back to the original game, you're faced with a tedious search through all the components to identify and remove those that belong in De Profundis. So while it's a great expansion, it's really only for those who feel they've completely exhausted the base game. Given all the cool stuff it adds, that's a shame.

There's a second, new expansion for the game which is what triggered me to write this review. It's called Furor Sanguins and adds a third side to the game, the lizard-like super warrior Squamata. Note that this doesn't actually add a third player. In most scenarios he's pitted against human or demonic opposition. The one that does detail all three sides in use at one sees the humans allied with Squamata, so it's still a two-sided game.

He's kind of a mix of the two existing factions: he rolls dice and assigns them to a board like the demon player, but the choices determine his stats like he's a human warrior. That makes him very easy to integrate into the base game. And with only a couple of new tiles to add, it's easy to go back to that if you so wish.

However, while he looks appealing, in practice the Squamata isn't as much fun as he sounds. Having only a single, overpowered figure removes a lot of the positional tactics from the game. Either he ploughs through hordes of the opposition, or he doesn't, and only the dice will tell you which way it falls. The scenarios try and mix things up a bit to compensate, but several are fiddly to set up and play. The best sees tactics returned by giving the Squamata a couple of human slaves but most of the remainder are forgettable.

Claustrophobia isn't Space Hulk. It's what Space Hulk might have looked like if the brief for the game had gone to some maverick Eurogame designer instead of Games Workshop. The result is quite brilliant. And while the expansions do leave something to be desired, with its bargain price point, incredible looks and tight game play, it's one of the few games I'd recommend to be in anyone's collection.

May 03, 2019
Rating
4.0
Claustrophobia
First impressions are that this walks a very impressive line between gibbering chaos and strategic choice, although for new players there's a bit too much information to easily digest at a glance. It also looks fabulous in play with the lovely tile art and painted figures. Tense. Exciting. Satanic.
MT
Matt Thrower #1 Reviewer 286 reviews