Pictomania, Homeland, Titans, Imperial Assault, and What the Hell? 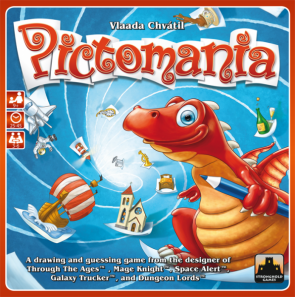 Back from the dead?  Discussion of Pictomania, Homeland, Titans, and Imperial Assault.

When I joined Fortress Ameritrash as a staff member earlier this year I fully intended to contribute on a weekly basis.  I’m already dedicated to writing often about the hobby and didn’t think the commitment would become burdensome in the slightest.  I’m also not the type of person to sign up for something and then back down as that’s not part of the fabric of my character.  And yet here we are.  The truth is that another gigantic opportunity presented itself and I couldn’t pass it up.  I can’t really announce this at this time but it involves one Michael Barnes and he partially alluded to it with his XCOM review comments.  Because of this enormous new endeavor that has me aiding in the management of a team of people and writing even more frequently, I had to scale back my contributions here.  I’m not going away but you’ll only be hearing from me a couple times a month at most.  My apologies for up and disappearing so quickly.

Anyway, I’ve been playing an enormous pile of stuff since my last column.  Stephen Buonocore offered to send me a copy of Pictomania and I was torn.  I’m a fan of Mr. Chvatil’s kick you in the sack style and I do enjoy party games, including Pictionary, but I wasn’t sure I wanted to devote the effort to another new game when I had so many others waiting in the wings.  I eventually said yes, received the thing a couple weeks ago and played the hell out of it.  It’s the first game I’ve introduced to my family since Wits and Wagers and it was a huge hit.  It was also loved with my regular group, one member asking if they could buy it off me if I intended to sell it.  I promptly said no because I’m not getting rid of this quirky oddity.

Everything I had read about the game concluded it was a gamer’s version of Pictionary and that I will agree with.  It certainly can appeal to a non-gamer crowd, as my family attests, but the couple of added layers of scoring and the Galaxy Trucker-esque time pressure are more suitable to us serious people.  Ignore the cute dinosaur with a large pencil on the cover as this game is not only layered but it can be quite mean.  In true Vlaada fashion if you’re not careful the game will spit in your eye and hack off a finger.  My very first game I ended up with a net score of 0 – seriously.  His games continually tell you to suck it yet I keep coming back for more.

Homeland is everything Michael says it is.  If I take Firefly out of the equation, I could almost surmise that Gale Force Nine’s dream team of designers are stomping around in my head like an even more warped version of “Being John Malkovich”.  Their work is aimed right towards stimulating and evoking the exact elements I crave.  I don’t need to say a whole lot here but my review does take a slightly different approach to Barnes’ excellent piece, as I explore some of the elements of the fantastic show this game is based on to help illustrate the espousing of the source material in connection to its overarching espionage theme.  However, don’t mistake my review for saying you have to be a fan of Showtime’s Homeland to be a fan of the cardboard form.

I’m pretty late to the party but the Titans expansion for the magnificent Cyclades is perhaps the single best expansion I’ve ever played.  I was a fan of the base game and of the Hades expansion as well, but this big box addition is unparalleled.  It brings the game a solid step further towards its Ameritrash edge while still maintaining its strongly rooted Euro sensibilities.  The new god Khronos is clever in that it propels the game forward by allowing you to grab one of multiple building choices.  The Titans themselves add great utility by allowing you to move troops and fight every single round.  Great stuff and mandatory if you enjoy the base game.

Imperial Assault on the other hand didn’t really blow my expectations away but I am roughly satisfied.  I think it’s a solid release but it fails to really capture the theme as well as its sister game X-Wing does.  My biggest complaint is the time pressure element in the campaign missions that sound like a solid idea to propel the game forward and cut down on playing time, but ultimately produce shoddy narrative slights that don’t align with anything I’ve ever seen on the big screen.  When a Wookie runs past three Stormtroopers to smash a terminal while an adjacent E-Web unloads on him at point blank you have a problem.  Then when the Wookie smashes the last of the terminals the game just ends with the Imperial playing reading a couple of sentences.  Underwhelming and not altogether exciting or clever.

Beyond that the campaign does rock though.  The upgrades are interesting and come at a quick enough pace.  The whole scenario system with a side mission deck fabricated from specific cards associated with the characters that are participating is fantastic.  I can’t wait to see our Force Adept get a shot at crafting her Lightsaber.  That’s the type of stuff this game needs to focus on and bring to the forefront with future expansions.  Bring me more solid campaign material and tear the goddamn cover off the ball rather than just being satisfied with single.

I have full reviews coming for Titans and Imperial Assault but they’re part of that secret project mentioned earlier.  Unless I get philosophical and struck with a concept I want to discuss, expect my next column to address a little unheralded gem called Shadows of Malice that basically puts a knife through the eye of Mage Knight.