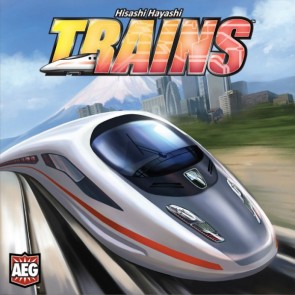 The deckbuilding mechanic of Dominion was the most revolutionary thing in the last decade of tabletop gaming. Many other games have build on that creativity. Yet after all that time and all those titles, deckbuilding still feels like a mechanic struggling to find its place in the world.

It's an inherently insular thing. Demanding significant setup time and forcing players to obsess over their own constructions while ignoring everyone else. Nightfall and Star Realms added more interaction, but it wasn't enough. A Few Acres of Snow briefly looked like a miraculous saviour but got crushed under the Halifax Hammer.

Trains looks like a re-themed Dominion. You play cards to get money to buy more cards and, if you pick your combos well, the economic engine of your deck slowly improves. It's got a curious new concept of Waste, useless cards that you gain from certain actions and which do nothing but clog up your hand. You can pass to get rid of all the Waste cards in your hand, or certain other cards can help you get rid of them.

It's interesting, but it's not enough to differentiate the game on its own. What does make Trains different, and special, is what you do with your economic engine. Rather than just an ever-increasing velocity of victory card purchases until someone wins, the goal of Trains is to build track. Across a hex board. Against other people.

Suddenly, your deck and your hand are worthy only of peripheral glances. Everyone focuses down the board in the middle of the table. They're together: pointing, chatting, worrying about what's going to happen on that board before their turn rolls around. It's not just more interaction. This is deckbuilding as a shared experience.

This dynamic is enhanced by the clever way in which you score points. Some come from building track into "remote locations" and some will come from victory point cards in your deck. But mostly they come from having track in cities where there are stations. It costs money, a card, and waste, to build a station but no-one owns it. Everyone with track in the city benefits. Station building in crowded locales thus becomes a vast and intriguing game of chicken.

Yet the game still manages to feel friendly and welcoming. Building track in a hex doesn't claim it as yours, it just makes it more expensive for someone to join you. Competition without cruelty.

Turns roll round with incredible speed, but you're faced with a wealth of options. Besides all those ways to score points, there's different ways to build your deck and expand on the board. Sometimes it makes sense to build a lean, card dealing machine and others you can embrace the Waste. Sometimes it makes sense to isolate yourself in a corner and others you're best shadowing other players and feeding off their stations. No two games are ever the same.

It's not as good a family game as it makes out to be, however. It has the same information overload as many deckbuilders, with so many cards to choose from and a selection that shifts with every game. This is great gamer fuel, of course, but many find it confusing. The two big maps on the double-sided board aren't great with just two players, either.

This is one of those expansions that's also a stand-alone game. You can play it out of the box, or combine the new cards and boards it offers with those from the original Train.

If you're new to the series, it's a much better place to start. The double-sided board has a big map for three to four players and two smaller maps for two. They're cramped and awkward making the game much more compelling for a duo of players.

There's also a couple of new mechanics. One of them is the concept of Route Bonuses. These are effectively like the tickets in Ticket to Ride: extra points you can get for connecting cities. There's nothing not to love about this. It adds depth, competition and excitement for no overhead. Rising Sun has the necessary cards and markers to add Routes to the original game too.

The other thing is adds are Attack and Reaction cards, two sides of the same coin. The Attacks are a little soft, as you'd expect in a game like this, but they still add some sweet kid glove brutality. And if you like the interaction, but not the nastiness, be sure to throw in some Reactions into the card mix too.

In making for these extra card types, Rising Sun does create one odd problem. What's gone to create the space are a selection of cards that allow you to slim and control your deck. Without them you're stuck with your starting cards for longer and it's harder to hone your deck into a potent engine.

Some might say this is a good thing. It can certainly end up creating some surprise plays. If you don't like it, there's plenty of cards with the necessary functions in the original Trains. Mix them both together.

Neither of these games are groundbreaking with their design. Plus they have a feeling of trying to be all things to all gamers, creating a game of all trades that's master of nothing. These are the only reasons I can think of why they haven't exploded into wider consciousness, because they're cracking titles. What they lack in innovation they make up for in impact. Here, finally, is a proper fusion of deckbuilder and board. Here, finally, is a game with all the creativity and variety of deckbuilding with interaction and positional play. Here, finally, is a deckbuilder I actually want to play.

RobertB replied the topic: #202619 18 May 2015 13:55
It looked great to my gaming group at first. Dominion with a board, it's like peanut butter and chocolate! But I've won the past three games of Trains that I've played by ignoring the track and building skyscrapers*. Maybe my group and I need to play a few more games to find the counter. It sounds like Rising Sun fixes that as well.

*yes, we know that buildings generate Waste as well.

RobertB wrote: Maybe my group and I need to play a few more games to find the counter. It sounds like Rising Sun fixes that as well.

Yeah, I understand this was a criticism of the original game. You certainly can't get away with that in Rising Sun, and if you just use the route bonuses from that expansion in the original (perhaps they can be downloaded/begged from somewhere) it ought to fix the problem.

stoic replied the topic: #202622 18 May 2015 14:51
Nice review. The waste mechanic and spatial play in Trains were interesting and revolutionary to be sure. However, Trains soon outstayed its welcome in my home after only a few plays. I wanted to like it, but, it was universally declared boring, no matter the variety of cards available and new deck-builder mechanic innovations. I actually prefer this waste type deck-builder mechanic in Mage Knight the Board Game where it shows up in wound cards, clogging up the efficiency of your deck. But, in Mage Knight, I can kill things. I guess in my house we just didn't like trains or building stations or laying track while dealing with construction waste or what have you. Trains needed a better way to screw with your fellow players--like, e.g., a train wreck, natural disaster, or Godzilla cards. It didn't satisfy my Ameritrash thirst for blood. I thought it was a revolutionary snooze fest. ZZzzzzzzzz I traded it for City of Remnants.

stoic wrote: It didn't satisfy my Ameritrash thirst for blood. I thought it was a revolutionary snooze fest. ZZzzzzzzzz I traded it for City of Remnants.

No, it's not an Ameritrash game by any stretch of the imagination. I just love it because it brings some interaction and sociability to a genre I thought was pretty much dead, and I'm enjoying the result. I tend not to consider Mage Knight because for me, it's glacial pace and complexity pretty much render it a solitaire game only.

stoic wrote: It didn't satisfy my Ameritrash thirst for blood. I thought it was a revolutionary snooze fest. ZZzzzzzzzz I traded it for City of Remnants.

No, it's not an Ameritrash game by any stretch of the imagination. I just love it because it brings some interaction and sociability to a genre I thought was pretty much dead, and I'm enjoying the result. I tend not to consider Mage Knight because for me, it's glacial pace and complexity pretty much render it a solitaire game only.

I never felt social interaction was ever found in Dominion so you're absolutely right on about Trains adding to a genre that was thought to be dead. I wonder what would have happened though if the innovations found in Trains had been released as an expansion for Dominion rather than as the stand-alone-game that is Trains? Would it feel as revolutionary or would it be placed in the variant or expansion category as a neat feature used to add more plays to Dominion for its fans?

wkover replied the topic: #202826 22 May 2015 10:47
I've decided that I don't like deck-building games where all cards are available for purchase all the time. It's too easy for people who know the game/combos to crush everyone else.

Also, Trains is mostly about getting rid of waste, and that's just boring.

I vastly prefer systems where only a handful of cards are available for purchase and players are forced to make do with their minimal options. That includes Legendary, the DC and LOTR deck-building games, etc.

I'm glad that I tried Trains twice, but I'll never buy it and don't need to play again.
Read More...