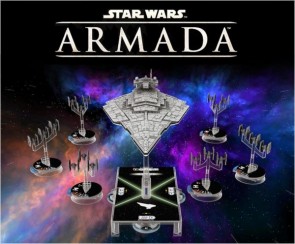 The base set of Armada looked to have the makings of an outstanding game. But it was kind of hard to tell for sure. With just three ships and a handful of fighter squadrons to divide between two sides, all you could do was sense the potential rather than experience it for yourself.

A generous first wave of expansions has now arrived. Each contains a variety of upgrades, many of which can, of course, be used on a variety of ships. And all that extra variety does the job. Armada finally plays like the game that it was shaping up to be.

Both sides needed extra ships for reasons other than variety, however.

The spindly, fragile Rebel ships felt desperately under-powered compared to the might of the Imperial Star Destroyer. The new Assault Frigate expansion fixes that to an extent. Dubbed the "space whale" by virtue of both a curvaceous design and a lumbering maneuver chart, it's the most eye catching ship in this wave.

It also comes with a wealth of upgrades to increase its firepower and durability. And it needs them: this isn't the panacea you might think it is. Even festooned with additional cards, it can't match the devastating laser broadsides of Imperial ships. Which is for the best, since it ensures that the two sides play in a distinct manner, as they should.

One nice feature of the Assault Frigate is that the two ship cards you get offer quite distinct builds. One lends itself to being tanked up and sent into battle. The other looks to be an impressive fighter base for co-ordinating rebel squadrons. All in all, one of these models will lend Rebel Admirals a lot of flexibility in fleet building.

The other two rebel ships are copies of the ones in the base game, the Corvette and the Nebulon-B. Each comes with some new upgrades, of course, to tempt you into investing.

In truth, it's kind of hard to see why you'd want a second Nebulon. There's nothing essential in the upgrade list and the ship itself is hard to use effectively thanks to its flimsy flank shields. Some neat title upgrades are tempting. Especially Yavaris which helps turn the frigate into a squadron command platform, a role to which the ship is well suited. The Corvette is a different matter. Fielding two or more of these as cheap, mobile fire platforms is a viable way of counteracting the ponderous Imperial ships and their short-range firepower.

The Imperials, in their turn, get the option of a new medium class ship, the Gladiator. While still at its best in close quarters combat, this adds some much-needed speed and flexibility to the Imperial fleet. It packs an enormous punch at close range and, thanks to a much kinder maneuver chart, it's far better placed to get in their and deliver its payload. Plus, since it's cheaper than the Star Destroyer, it means the Imperial player can field two big ships with enough points left over for those all-important TIE fighters.

The points cost of the Star Destroyers themselves makes it buying the expansion something of a quandry. Two of them on the table look terrifying, but it leaves little left to get anything else, and they're so ponderous that Rebel ships can dance round them at range. The lure is more likely to be the expansion cards. There's a nice commander, and the title Corruptor offers the possibility of outfitting a Star Destroyer as squadron command rather than just brutal damage output. But this is probably the least interesting pack in the wave.

All these ships help add depth and breadth to the game. Bringing even a couple in to your collection should give you enough upgrades to build a lot of interesting lists. But what really shocked me about wave 1 is that the real interest isn't in any of these lovely big models. It's in the fighter squadrons.

There's a pack for each, both with four different models of fighter. Different fighter models excel at different roles, as you'd expect. Rebel A-Wings and Imperial TIE Interceptors excel at taking out enemy squadrons. At the other end of the scale B-Wings and TIE Bombers offer impressive anti-ship firepower for their meager cost. Each fighter type also comes with a new hero, like Tycho Celchu or Darth Vader should you want him.

It's because each pack contains four very different types of craft that these have such a huge impact on the game. Fighters can screen big ships, venture out to blow away the escorts of enemy craft, creep in close for a killer blow. Co-ordinating the different types along with squadron commands from the big ships is a complex and compelling source of tactics. It's hard to learn to use these things well, but it's essential for success.

The main issue with Armada was and remains its cost. There's a slight saving grace here in that these expansions punch above their weight. If you're collecting one faction then just a couple of selective purchases will add enormous diversity and fun to your games. And if you can afford it, you should. With wave 1 on board, Armada has blossomed into an incredible game. It looks great, plays fast and offers enormous replay value alongside a fine balance of depth and drama. It's the best game I've played in several years, and you should play it too.

Centaur255 replied the topic: #204364 15 Jun 2015 17:13
Great points throughout the review - excellent analysis. I disagree on the Nebulon point, though: having played with a second Neb since it came available, I've actually found it extremely useful for army building.

Players will purchase a second Neb-B 1) for the new cards (the additional ship names are *very* useful, and much easier to use in play than the Redemption card that comes with the base set), and 2) for an additional highly mobile supporting fire vessel. Considering that you can get up to 4 Engineering (which means good shield replenishing if you need it) and up to 4 Red Dice from the front hull, they can dish out a good amount of damage early, especially with the Salvation upgrade. Sure, it can't tank like the Assault Frigate (and it's not designed for it), but with two Braces and an Evade you can sustain quite a few hits on a hull zone that only has 1-3 Shield points (and you can get them back each turn, even if you only have the Engineering token and not the full command).

To tie into a later part of the review, you'd purchase the Neb-B set on similar grounds to the Victory set: the cards, plus another option if you need it for your army. Not necessarily the most cost-effective way to build an army, but it does have its uses,

So is playing a fleet of either the Imperials or Rebels noticeably more expensive than other?

Matt Thrower replied the topic: #204506 17 Jun 2015 18:20
If you want to minimise cost, go Imperial. A base set, a gladiator and a fighter pack and you'll have everything you need. Especially if you're happy faking any missing title and upgrade cards/

Speaking of which, there's a handy squad builder here which will explain what they all do: