The Hunters: A brief review 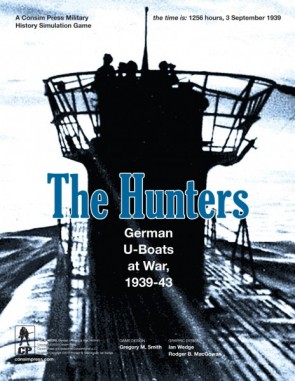 Take her fast,
Take her deep,
Take her where the fishes sleep..
Damn the depth,
Damn the pressure,
Take her down just like the Thresher... "

The Hunters: German U-Boats at War 1939-43 is a solo game of submarine warfare in World War 2.

In the game you are given command of a German U-boat and take to the seas with the goal of sinking as much allied shipping as possible. Over the course of your career, you will have the chance to earn promotions, crew improvements, and if you are highly skilled you may even return home a hero with the Iron Cross upon your chest.

The Hunters treads the fine line between overly detailed and too superficial. It provides a satisfying array of options to choose from in the form of the submarine models, weapon load out, and area of operations without drowning in sea of minute differences of little overall consequence. Yes the torpedoes in the early days are more prone to being duds than those produced later but you don't need to know the exact date of manufacture. The subs have differences in their range but there is no speed or angle calculations nor fuel monitoring.

As a result, there isn't an overwhelming amount of book keeping allowing the player to get to the action sooner. And that really is what it's all about.

Once on patrol there are several charts and tables to generate random encounters and missions. Perhaps you are spotted by aircraft or maybe you meet a ship foolishly on it's own without escort or maybe even a convoy with multiple tempting targets. The ships are generated randomly and can vary from skimpy freighters to fat tankers or maybe even a capital ship which if sunk will bring you fame and fortune!

Here is where the main decisions of the game are made. Do you attack in the day or wait until night and risk losing the target? Which torpedoes do you want to use? How close do you want to get? Submerged or surface attack? Which target do you want to concentrate on? You make your choices and take your shot. Perhaps you sink the target or only wound it. Perhaps you sneak away without detection or maybe the destroyers are right on top of you and begin dropping charges as you crash dive for safety.

The patrols are for a fixed length of time and then you must return home for rest and refit giving time for the damage your boat has taken to be repaired. In these interludes your crew may improve or casualties may be replaced by less experienced men. You yourself may be given promotion or decoration or even a newer model submarine. Then it's back out to sea.

To a certain extent The Hunters is from an older school of design than most modern war games. It is very random in the vein of B-17 Queen of the Skies where your decision points, while important, are few. What, when and with what to attack a ship are the three major choices. Other than that it's charts and random die rolls. This seeming shallowness is offset by a sense of narrative due to the ability to name your ship and your captain, to track his progress and his crew's over time. You get attached to Captain Strussel and his hard luck crew.

Tension, such as there is in the game, is produced mostly by time. You only get so many patrols in the scope of the game and to succeed you must sink a sizable tonnage of ships. Without being bold and taking risks as to range and time of attack you will not reach your goal but by doing so you incur damage that must be repaired and even the chance that you might be killed. This damage increases the length of time your ship must remain in port during refit which further cuts down your time spent hunting.

The game itself plays smoothly. It has a 24 page rule book which may seem intimidating to some but in practice it is very intuitive and quick. There is a certain amount of tedium in setting up the encounters and tracking the ships sunk but not nearly so much as I have encountered in other games on the same subject. Also, using the Vassal program, which emulates the board game but without rules enforcement, much of that burden is removed and the game moves at a brisk pace so that even if you aren't making a lot of choices those that you do make occur frequently.

It's fun, no question but it still leaves something to be desired. I wish there was more participation rather than observation. Even so, it is an enjoyable way to while away an hour or two in the Kriegsmarine.

charlest replied the topic: #204706 21 Jun 2015 09:42
Good review. I liked this game quite a bit when it came out as a B-17 replacement but interest waned after several campaigns as things got repetitive.

Scottgun replied the topic: #204774 22 Jun 2015 16:36
This game has floated on my wishlist for a long time but I've never read anything making me want to pull the trigger. This review continues that trend. I think it's for die-hard U-boat boat history fans, and while I find the subject interesting, not interesting enough.

What about an F:AT Solo Game Club?

Everybody commits to buying/acquiring one solo game, we pass them around once a month.

Michael Barnes wrote: You just gave me an awesome idea.
What about an F:AT Solo Game Club?
Everybody commits to buying/acquiring one solo game, we pass them around once a month.

We can start it now by having everyone post solo games they own and are willing to lend out. People can then post or pm them that they want to borrow something. I think borrower should pay for shipping both directions. I stopped buying solo games. I don't even own any pure solo games because I knew I'd play a few times and get bored of them but this would make buy a game so I can trade it. I own 3-4 games like Lord of the Ring: The Card Game that plays 1-2 players that I'd put up for borrowing.
Read More...