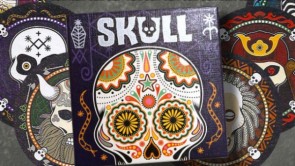 It's often not the rules or the components that make a game. With Skull, it's the little noises. The tut of tongue against teeth. A soft sigh. A full-throated chuckle. Ambiguous sounds uttered before a card gets flipped over and all hell breaks loose.

Skull is a bluffing game. Everyone starts with four cards, three showing flowers and one a skull. You place one face down, maybe more. Then you start wagering with other players to see how many flowers you think you can flip.

The devil is in the fact that whoever wins the wager has to show their own cards first. So if you put down a skull yet placed a bet, others can catch you out with your own cleverness. After that it's up to you whose cards you want to turn over.

And then the noises begin.

What do they mean? Is that low whistle a warning or an appreciation of a cunning pick? Do you read that intake of breath as one of shock or anticipation? As the tension unspools like razor wire, each sound ramps it up until it becomes unbearable. What can you turn over? What do you need to leave?

No matter how bad it gets, the choice is yours. And if there's one thing I've learned from playing Skull, it's this: it's amazing how often good people make bad choices.

The reason it's so scary is because if you find a skull you don't just lose the round, you lose a card. Lose all four and you're out of the game. But the stakes are higher than that because if you manage to get all flowers you win that hand. And it only takes two winning hands to take the whole game.

You won't want to bet. Once someone's taken a hand, though, you'll have to bet. Just to keep them one step away from winning the whole thing. Just to make sure you get another chance to bet when you don't really want to.

The astute will have spotted that Skull has a lot in common with Liar's Dice and its commercial variants like Perudo. And so it does. Yet there are no dice here, and no card draw. There is no randomness. There is nothing at all but the bluffing and the revealing and the tiny sounds of terror.

Because you choose other people's cards to reveal rather than just calling them out on a lie, that terror goes on and on. Like a chase sequence from a horror film. Except sometimes there's a happy ending. Not as often as you might like, though.

It's fun, but I'm not convinced how much the results have to do with determining the winner. As people start to drop out the game becomes leaner and meaner. The rules say inexperienced players should not start with just three playing. They say that's when Skull is at its most difficult. Yet if you play a game, and you're left with just three after elimination, that's also when it gets the most interesting.

You remember whether people bid. You remember what they bid. You start wondering what that means about what they've got in their hands. You start to pick up little clues and details that suggest who might have nothing but flowers left to play.

And as all the information comes in, things just get worse. Each wager carries behind it a mortal weight of doubt and half-truths. The noises get a bit louder.

Eventually someone will win. And the fear deflates like a balloon, the gust of air blowing away the uncertainty and making room for relief, even smiles.

Then someone who didn't win will say "let's do that again!" And everyone will see that barely twenty minutes have passed, even if they felt like a lifetime, and make little noises of agreement. Then you're hooked.

Unless you're part of the perfect logic play brigade that is. If you want to game this game, you can. You can deliberately place a skull and then a silly bid to sacrifice one of your cards to stop someone else winning, for instance. Most gamers will rightly recoil from the mere idea of throwing away an advantage to stop another player.

There really isn't much more to Skull than I have told. A couple of extra rules for people with just one card left. Small but important distinctions, like the fact that if you flip someone else's skull you lose a random card but if you flip your own you get to choose. Anyone can play this. Almost no-one can play it well.

There's not much in the box, either. Just four beermat-like tiles bearing the skull and flower symbols for each player and some rules. The "play mat" which allows you to keep "score" by flipping it over the first time you win a hand is almost an insult. It feels overpriced, although the art is lovely. There's another edition called Skull & Roses, which looks even nicer.

It's not all roses: some of it is skull, too. The game feels like it sits on an uneasy line between gamer-fodder and mass-market. It's perhaps a bit too Spartan for the former, a bit too exotic for the latter. Yet people talk about how deep strategy from simple rules is the hallmark of a great game. Skull has deep fun from simple rules, and it's just as good a benchmark to judge a game.

Mr. White wrote: I've long thought of picking this up for playing with The Casual Players Club. It seems like a great game for at a bar.

It definitely is the perfect bar game. I think this is based off of an old bar game actually that was played with coasters. I seem to recall playing something similar in my army days.

This is a great review Matt, I'm somewhat astounded by your ability to say so much about a game like this. I love the game, but it's hard to write more than a couple of paragraphs about it.

I'm wondering when I'll reach my quota of them. I mean, they do run the gamut from ultra light (Cockroach Poker, Resistance) to medium (Coup, Sheriff of Nottingham) to heavier (Shadows Over Camelot, Battlestar Galactica). This game definitely seems to boil the whole thing down to its essence, so it's probably worth a look for me. This also reminds me I need to get a copy of Cockroach Poker for myself at some point, what a stupid fun game that is.

SixpenceGames replied the topic: #207926 04 Aug 2015 10:55
This is probably my favorite pub game. I started playing it when I lived in Aus and have been cracking it out ever since

Egg Shen replied the topic: #207951 04 Aug 2015 16:30
I keep meaning to pick this up. Like Mr. White, I've got a group of casual players and stuff like this is perfect those game nights. This game is popular and it seems to go OOP fairly regularly. In the US it currently seems to be hard to find.

I also think the new edition's artwork trumps the biker gang stuff in the original game.

Egg Shen wrote: This game is popular and it seems to go OOP fairly regularly. In the US it currently seems to be hard to find.

This was going for about $20 on amazon not too long ago. The CPC is scheduled to go to a micro-brewery next week, so I was gonna order it. I see it's now about $50!

Guess I'll be making my own out of coasters...

Jexik replied the topic: #208044 05 Aug 2015 14:00
I agree that Skull is great. I played it for at least an hour with my brother and nephew one afternoon. Three player is super quick and different.

I like the kinds of games that Ken is talking about and I've been building a stable of games I can play with just about anyone and most allow for high player counts: Avalon, Spyfall (was a gift before I had even heard of the game), One Night Ultimate Werewolf, and Skull. Toss Hanabi and Red7 in there although they don't involve bluffing or lying. I really enjoyed Codenames over GenCon too. I'll need to pick it up.

These games have replaced 7 Wonders with gamers when we're sitting around saying "well, we've got 30 minutes and 6 players, what should we play?" I like 7 Wonders, but enjoy it most with 3-4.
Read More...