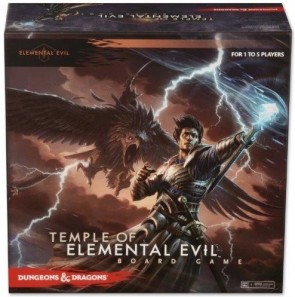 Innovation in game design seems to be in short supply nowadays. Yet you can find it in unexpected places. Take all those wargames that use the same basic rules but have new units, maps and mechanical tweaks for different battles. Playing through these franchises can reveal an ocean of wonder inside those tiny details, making history come to life.

So, just because Temple of Elemental Evil is the fourth game in a series doesn’t mean it’s not going to feel fresh and clever. However, in honesty, it’s going to need to pull out all the stops to impress. A sense of staleness was already present in the last Adventure System game, Legend of Drizzt, back in 2011.

For those unfamiliar, the Adventure System is a series of co-operative dungeon crawl games. The rules are based on a pared-down version of 4th edition Dungeons & Dragons. Players pick a scenario and build a random stack of dungeon tiles. As they explore the turned over tiles will reveal traps, event and monsters. Each creature has a set of simple AI routines to attack and use its special abilities. Easy rules that bring life and colour to the gray flagstones.

It’s a great system. Separate decks of monster, encounter and treasure cards offer a lot of variety from basic mechanics. Yet for all that accessibility, decisions matter. Many hero abilities are one-shot, and timing can be crucial. A particularly neat twist is that monsters often move per dungeon tile. This leaves precise placement to the players, offering the chance of clever strategic combinations.

It also helps to avoid the boss-player problem that’s such an issue in co-operative games. Each player has their own set of powers and controls their own movement and monsters. They can do whatever they like. Yet the standard balance of abilities across D&D character classes encourages true co-operation. Tanks can tank, but it helps if there are Mages for missile fire and Rogues to bust traps.

The first game in this series, Castle Ravenloft, also used scenario setup to add further interest and imagination. The second, and my favourite, Wrath of Ashardalon, had simpler scenarios but chained them together into a campaign. There was some official and some fan-made material to allow owners to use both games together. By the time we got to Legend of Drizzit, there didn’t seem to be much new to offer any more.

So what do we have in Elemental Evil to resurrect this system? Sadly, not much.

There are precisely two major innovations. First, traps are no longer the result of encounter cards but get placed as tokens on certain tiles. This feels like a step back. They do offer players the choice between spending an action disarming the trap or risking it and hoping for a “clear” result. But many trap tiles don’t have monster spaces, so the tension cranks down. And the actual traps are just numeric damage. A far cry from cool stuff like the rolling rock trap in Ashardalon, which saw players fleeing and scattering like fleshy ninepins.

That leaves us with a new campaign. This was the big draw for me: the campaign in Ashardalon was the reason I liked that game best. The series seemed to be crying out for some more detailed rules. Most of all what people wanted was a way to build their characters beyond the arbitrary second level cap on the cards.

They didn’t get that. Although what they did get offers much of the same feel and is an improvement on Ashardalon’s campaign. Now, most of the treasure cards are gold pieces and you use them to purchase upgrades. A thousand gold nets you second level. Then you buy tokens for things like dice bonuses or power re-use. Players carry these between adventures and can use each token once per scenario.

The campaign itself also does a fine job of linking adventures into a narrative. Together with the campaign rules, playing through them one at a time builds a proper sense of camaraderie. It feels very much like a full-blooded role-playing game, with more strategy and less rules arguments.

The flip side, of course, is that the adventures don’t work so well played as one-shot games. The fact they build in difficulty doesn’t help. Neither does a lack of imagination. Most of these lack the spark of originality seen in Castle Ravenloft.

I don’t want to denigrate this game: Elemental Evil is a good game. It’s worth your time and money. Especially so if you’re really up for playing through the campaign, which is obviously the focus of the design. And I would encourage everyone to own and play an Adventure System game. Maybe even two. They’re ace, and they all integrate well together. But you don’t need all four.

So the question becomes one of which is better. And in spite of the new material on offer here, the answer is still Ravenloft or Ashardalon. Unless, that is, you’re looking for a top value way of obtaining some plastic figures for your Princes of the Apocalypse campaign.

July 26, 2018 (Updated: July 26, 2018)
Rating
3.0
Temple of Elemental Evil
Tweaks to the campaign system make it feel more like a narrative progression. Ultimately, though, there are too many of these games. And the classic feel of Ravenloft and Ashardalon make them the top picks in the system.
MT
Matt Thrower #1 Reviewer 286 reviews

san il defanso replied the topic: #208680 17 Aug 2015 11:14
I have the first three games, and I'm tempted by this one too for completion's sake, but I don't play the first three a whole lot as it is. That means a campaign isn't a huge draw, or very likely to happen even if it was.

The biggest draw for these games right now is that my kids love playing with them. Truthfully that's about as much as I play with them these days myself. I'd like to grab this at some point to round out what i have, but each successive iteration is beginning to seem less and less essential. At least Drizzt had some really cool monsters.

SuperflyPete replied the topic: #208696 17 Aug 2015 15:59
I had a chance to buy this at GenCon for 40$ (or 38$?) and didn't, primarily because I don't have all my painting stuff unpacked, and the other 3 are painted. This sounds like it's "more of the same", but really, more of Drizzt, which I find myself liking less than the others from a "story" perspective, which is sad, because Ashardalon has very little story.

I'll probably snatch up the new campaign rules and be done with it.

aaxiom replied the topic: #208714 17 Aug 2015 21:49
For what it's worth, there was a pretty respected effort to provide more levels... a fan-driven creation. When the Ravenloft series gets revisited around here, that's taking priority over any new product, as a result.

Uethym replied the topic: #208732 18 Aug 2015 11:14
A lot of the tiles spawn multiple monsters, more of the monsters have two wounds, and the average XP for each is greater. This had a huge effect on feel for our group. The old Ravenloft strategy of exploring as frantically as possible to avoid Encounter cards got us massacred here. We found it better to clear down to 1-2 monsters before advancing, and the increased XP from so many kills allowed us to cancel the harsher Encounter cards accrued from not exploring. It felt more like a regular dungeon crawl than a mad dash for the finish, while still keeping some time pressure.

Egg Shen replied the topic: #208735 18 Aug 2015 11:36
Yeah, I think Temple of Elemental Evil makes several small tweaks to the system that actually improves it. One improvement that can be seen as a flaw is that it's really not good for one off missions. To get the best value it's meant to be played as a campaign. This is something people have been begging for since the DDAS games debuted. Now that it is here and fully realized, people aren't so keen on it.

If the game has a major flaw for me it's the setting. I don't really care all that much about the elemental cultists and whatnot. It creates a weird vibe were all the enemies are too similar. I still think Ravenloft has the best setting and I'm hoping they do Tomb of Horrors for the next version of this game (if there is one).

Josh Look replied the topic: #208751 18 Aug 2015 13:26
Well, you have to look at _when_ the DDAS games started coming out. Back then there weren't anywhere near as many campaign games around and 4E was kind of a chore. Now that we've had more campaign games come out, some of us finding it wasn't as good of idea as we had originally thought, plus 5E is here and plays *beautifully*, yeah, I for one have little interest in the campaign. Still love these games though.

Uethym wrote: A lot of the tiles spawn multiple monsters, more of the monsters have two wounds, and the average XP for each is greater. This had a huge effect on feel for our group. The old Ravenloft strategy of exploring as frantically as possible to avoid Encounter cards got us massacred here. We found it better to clear down to 1-2 monsters before advancing, and the increased XP from so many kills allowed us to cancel the harsher Encounter cards accrued from not exploring. It felt more like a regular dungeon crawl than a mad dash for the finish, while still keeping some time pressure.

I am a vocal dissenter of DDAS games as I think your point was the main reason why I disliked them so much, besides feeling too abstract for a dungeoncrawler.
They felt like a gauntlet, and lacked any exploration. Exploration does not equal reveal a new tile for yet more shit to kick your teeth in. But it's nearly impossible to get the feeling of good exploration when you rely on a co-op system than a human opponent. Just the nature of the design.
But if they have addressed that somewhat, then this may be the one for me, despite loving the Ravenloft setting more, and heavily disliking the revamp made to Temple of Elemental Evil. No Zuggtmoy? Iuz? Where is the Village of Hommlet near Nulb?

Shellhead replied the topic: #208800 18 Aug 2015 22:26
Yeah, I'm very disappointed that the names Ravenloft and Temple of Elemental Evil got dragged into this DDAS mess. Ravenloft in particular should have had gloriously gothic horror tiles, instead of scenes from a warehouse of walls. At least there were minis.

SuperflyTNT wrote: I'll probably snatch up the new campaign rules and be done with it.

It isn't easy to retrofit the ToEE campaign system to older games in the series because of how specific monster/item/encounter cards are added into their respective decks after each scenario.

There is a small flavor of Descent 2nd ed in the campaign, as well, where if the heroes accomplish a particular goal then cards x,y are added to certain decks as a 'reward'. In essence, if you do better, then better treasures are added to the treasure deck, but worse events are added to the encounter deck as well.
Read More...