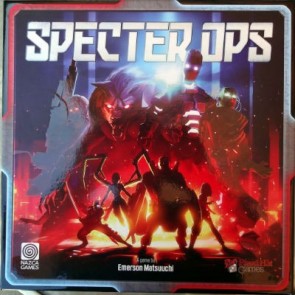 Hidden movement is the most under-used mechanic in all of board gaming. You can count the quality titles that use it on the fingers of one hand. Fury of Dracula, Letters from Whitechapel, Scotland Yard, Nuns on the Run and that's about your lot.

Specter Ops still doesn't take us on to the second hand. But it expands the genre with a style and energy that has to be played to be appreciated.

Like many of these games, it's very simple. One player is an agent, who moves around the board in secret trying to sabotage three of four randomly-determined squares. The others are hunters, enhanced humanoids whose mission it to catch and kill the agent.

The hunters move on the board, the agent records theirs on a paper pad so you can check for cheating. Whenever a hunter ends their turn with a straight line of sight to the agent, the agent figure joins them on the board until it can hide again. If the agent moves across a hunter's vision, they place a marker to show where.

That's pretty much it. The game has an age rating of eight plus on the side of the box. It's not lying. It'll even play to completion in about an hour. You might imagine that such a simple framework couldn't support anything worthwhile. You'd be very wrong.

Specter Ops manages to nail an aspect of hidden movement that's too often overlooked: deduction. The hunters have to use an unholy combination of logic, strategy and intuition to pin down the agent. It's rare they can be certain where the agent is, and equally rare that they have no clue. There's plenty of opportunity for bluff and counter-bluff. Trying to second-guess the agent player's mind could pin her down or let her escape into the shadows.

"We saw her there, so now she can be here or here unless this or that in which case ..."

Almost every turn both sides feel like they're inches away from victory or disaster. The agent can be shivering behind a barrel as hunters stalk past. The hunters can get a sudden unexpected flash of their quarry and be away in full cry.

Unlikely as it may seem, the main arbiter of all this wonder and excitement is the board itself. It's a tricksy, labyrinthine thing with just enough space to rush around and just enough corners to hide behind. That the players can move diagonally yet only see in straight lines facilitates a strange sense of open claustrophobia.

The board is aided and abetted by a handful of special abilities. There's a small selection of hunter and agent characters, each with specific powers. One agent is hard to kill, for instance, while one hunter has psychic powers that can reveal limited information about the agent. The agent also gets a choice of limited-use equipment to help them, like a flash grenade that blinds hunters for a turn.

These extras add a lot of flavour, strategy and replayability to the game without cluttering up the rules. They do also introduce a small problem, though. To play effectively, hunters need to know upfront about what all of them can do. It's an annoying but minor speed bump in the game's shallow learning curve.

There will be inevitable comparisons with the existing dark prince of hidden movement, Fury of Dracula. The super-simple rules framework of Specter Ops means it can't compete on grand narrative or replay value. For sheer atmosphere, however, it's a dead heat. Moving plastic over cardboard feels scarily close to creeping through the shadows, potential danger at every turn.

The game is a chameleon, effortlessly slipping between a hunt, a chase, a little tactical combat. And back again as the agent is lost and found in the wandering alleys of the board.

The hunters are actually faster and more flexible than the agent because they have access to a car. This might seem odd at first but it's a big part of what makes the game work. To succeed, the agent needs to rely on their information advantage, and little else. Powers and equipment help in case of slip-ups or lucky hunter guesses, but when they're gone, they're gone.

The game was clearly designed for three: one agent and two hunters. It works well enough with two, leaving both hunters in the hands of a single player. Adding in a fourth player means three hunters and a bunch of free power upgrades for the agent, which seem to balance out.

A fifth player means that one of the hunters gets to be a traitor, secretly working with the agent. This is either going to be the best or worst variant of the game, depending or your taste. It can lead to a bunch of confusing rule anomalies, which is a bit annoying. On the other hand, it pushes the fear and paranoia in the game through the roof.

I know which I think is the better side of that trade-off.

Specter Ops is a clean distillation of everything that makes hidden movement so compelling. Yet it still retains strategy, deduction and excitement. Tense, slippery and with a real sense of emergent theme, it's a heady brew indeed.

Brewmiester replied the topic: #210111 07 Sep 2015 10:12
I got to play a four player game Saturday night at Gen Con. I was the agent and very happy with the number of decisions I had to make while playing; when to use equipment, back track or not, which objectives to go for, how fast to move if you think the hunters will use the car sensor that turn or not, etc. Another source of friction for the agent is the limited number of moves you have to accomplish the goals and get out.

I also like the graphic design of the board which convey the feeling of an after hours industrial/tech complex.

Matt Thrower replied the topic: #210114 07 Sep 2015 11:12
Yes, there's a lot to think about when you make a move as either side. But the lack of absolute certainty over where the agent takes the place of randomness to keep things tense and exciting, and stops the game degenerating into an AP grind.

SuperflyPete replied the topic: #210136 07 Sep 2015 22:49
I like everything about the game except the design. Art, bits, all Plaid Hat standard (read: puts FFG to shame) but I really don't like hidden movement that's not Fury of Dracula, and I didn't like it at all.

First Plaid Hat game I didn't like. Really glad I didn't buy it. I think Ninja: Rise of the Scorpion Clan is a substantially better game using the hidden movement mechanic.

That is all, carry on.

Shellhead replied the topic: #210157 08 Sep 2015 09:40
Looks like this game might have a cyberpunk setting. That has my interest. The hidden movement sounds less clever in implementation than Fury of Dracula, but the equipment and special abilities of Specter Ops might make for more interesting encounters. Wish that I could try this one before buying.

Matt Thrower replied the topic: #210213 09 Sep 2015 07:53
It's only less clever than FoD because there's less to take account of. All the game needs to care about is where the agent is, not whether he's dropping minions or clues behind him as he goes.

I'm not sure it makes for more interesting encounters than FoD. After all, Dracula has a range of supernatural powers and the agents accumulate equipment. They play very differently in some ways, though and that's a big part of the appeal. Dracula is very much a game of find-and-chase. While you do get chases in Specter Ops, it's more a matter of deduce-and-kill.
Read More...