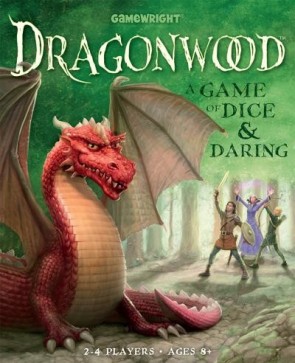 Game Name
Dragonwood
Publisher
Gamewright
There Will Be Games

Dragonwood is the sort of simple game that looks like a collection of a few old mechanics, but turns out to be more than the sum of its parts.

Dragonwood is as 2015 release by Gamewright, a company best known for Forbidden Island and Forbidden Desert. The strength of Gamewright's catalog is targeting families and young children, so most of their game don't get a lot of press around here. What separates Gamewright from most of the family games on department store shelves is that Gamewright has a good eye for taking concepts that board game hobbyists know well and distilling them down into simple rules that even the most non-hobbyist family can enjoy. This unfortunately leaves many of their games in the pit of the not very interesting for hobbyist gamers, but Dragonwood doesn't fall into that trap.

Dragonwood is card and dice game set in a fantasy forest populated with monsters. The goal is to capture the monsters, each having varying point values, in order to have the most points at the end of the game. To do so you'll play cards in order to roll D6s with the sides numbered 1-2-2-3-3-4. The game ends when players have run through the player draw deck twice or both dragons are captured. Along the way you'll be able to capture enhancement cards that make it easier to capture the monsters, but enhancement cards can't be used to capture further enhancement cards; you'll have to roll the dice unmodified to get those.

The forest deck contains the aforementioned enhancement cards as well as Fire Ants, Spooky Spiders, Crazy Bats, and of course, amongst other cutesy monsters, two dragons. Five are always on display in a row called the landscape. Each card has three values you can try to roll to capture it: Strike, Stomp, and Scream. Stomping works best against the Fire Ants, whereas Screaming might work best against an Ogre. The player deck is 60 cards in five suits numbered 1-12, and four Lucky Ladybugs that let you draw an extra card immediately.

To Strike a monster you need to play a straight, and you get to roll a number of dice equal to the number of cards played in the straight. Stomp and Scream are sets and flushes and work the same way. Playing as few as one card is legal, and one card is enough to give you a 50/50 shot against the weakest monsters. On your turn you'll choose to either use one of these attacks and roll to capture, or you can "Reload" and draw one card. If you do successfully capture a monster it is kept in front of you face-down, so there's no point counting during the game. Enhancements are kept face-up in front of you and will give you things like +1 to all capture attempts, reroll a die, and such. There are a few more interesting Enhancements but that really is all there is to Dragonwood.

Well, that's all there is in the mechanics department. Playing the game is more interesting than it sounds. The hidden points are what makes it work. You've been building up your hand to try roll six dice against that big bad monster worth a bunch of points, but while you've been doing that John got a really good Enhancement card and Jane's been taking out scores of little monsters for cheap points. How do you adapt? Is that big monster worth it, or do you actually need it now to stay in the game? Should you go for the available Enhancement instead and hope you're the one who is able to take out the dragons later? These aren't particularly agonizing decisions, but there's just enough there for the game to stay interesting anyplace in the 2-4 player range.

Gamewright and the designer knew where to draw the line with this game. The rules are blissfully simple and absence of any extra weight bolted to the chassis is really quite pleasant. Dragonwood is certainly a decent game for families or as a filler, but it just may be an amazing way to teach basic game concepts to kids. Hand management, die-rolling against a target value, straights and sets and flushes, and Enhancement cards are all present here in an extremely accessible way. The box says ages 8+ but I'd wager you could go younger with some patience. If the game were played as a teaching and learning exercise you could even save the point values of the monsters for later and let the kids work out how to capture whatever monsters they want most.

I'm not sure how to wrap up this review because I'm not sure how to categorize Dragonwood. It's certainly a filler game, but it seems to deserve a better categorization than that. It's a kids-and-families game but my wife and I enjoy it all the same. It's a game that signals to me that Gamewright's catalog might be worth a second look.

July 18, 2018 (Updated: July 18, 2018)
Rating
3.0
Dragonwood
Dragonwood is the sort of simple game that looks like a collection of a few old mechanics, but turns out to be more than the sum of its parts.
W
wadenels Top 100 Reviewer 2 reviews

Frohike replied the topic: #210278 10 Sep 2015 00:56
This sounds like something I could get my 9 year old daughter to play. She and I have been playing lots of Jaipur & Takenoko, but she hasn't been very interested in Lost Cities. I think this is because the archaeology theme doesn't compare favorably to her other favorite: Thebes. Dragonwood, on the other hand, has some imagery that might compel her to play.

SuperflyPete replied the topic: #210295 10 Sep 2015 08:38
I've played several of their games, and I have yet to play one that I dind't enjoy. They're also very generous and kind when it comes to review copies, so if you ever want to explore their catalog, you can contact them and see about getting some copies to review.

Terzetto is a very fun abstract that's great for kids.

Sleeping Queens, Aunt Millie's Millions, There's a Moose in the House, and Quests of the Round Table were in heavy rotation with my kids when they were younger.

One of the arguments I have on BGG is about rating kid games, and how they should be considered. When you boil it right down you can't place a rating on something from an inappropriate perspective. It makes no sense. So games like Dragonwood need to be considered from the perspective of their target audience.

All that said, Loot by Gamewright is an excellent game as well, one that has Knizia's magical fun-for-the-whole-family touch to it. Simple enough rules-wise for any age to understand quickly, significant enough from a strategy and social intelligence perspective to grow with your children. Also dirt cheap.

They'll be rated highly in our house.

Mr. White wrote: These are to be played with a 5 year old girl and an 8 year old boy.

They'll be rated highly in our house.

Exactly, because you're mature enough to step out of your bubble and understand what's working for your kids. This kind of review brings valuable information to parents, because it's willing to speak to both sides of the coin. I look for three things when I'm reading a review for a kid game -- 1) do kids like it, 2) do adults like it, 3) does it need parental supervision for kids to play it. A game can knock it out of the park in any one of those three questions and be of interest to me.

Forbidden Desert is better than Forbidden Island, but - with water rationing and ever-piling sand - it's more unforgiving. I like the clever grid system for finding the ship-o-copter pieces.

Forbidden Island might be better with younger kids. (???) Neither one is particularly easy, though, so be prepared to LOSE HARD.
Read More...