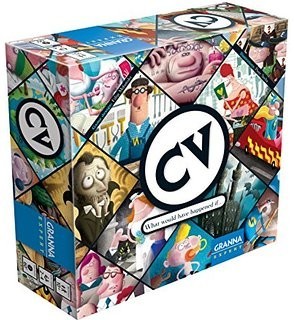 If you took the premise from The Game of Life, the dice rolling from Yahtzee and sandwiched them between some weird cartoony cards then you'd have the game CV (Curriculum Vitae). The primary mechanic is what we all know as the "Yahtzee Roll". Dozens of games use this mechanic. Does CV attempt anything new to help separate it from the pack?

In CV everyone starts off in childhood and this is only phase of the game where you're not chucking dice. Instead, there is a draft where each player will end up with three cards. All of these cards (except one) are one time events that can be used later on in the game. For example, if you get the piggy bank card then later on in life you can crack it open and obtain some extra money to use.

The main game is played using three decks of thematically structured cards. Naturally, you start in the pimply, awkward Young Adult deck and then grind your way to Old Age. Along the way you're trying to live the most satisfying life. This setup gives the game a nice sense of progression. The old age cards are the hardest to acquire, but if you lived a good life early on you should be able to get some of the best ones without having to rely on the luck of the dice.

On your turn you grab the dice and roll the bones up to three times. Then you use the results to acquire up to two life cards. The cards represent experiencing some sort of life event. Maybe you fell in love and got married. Maybe you popped some MDMA and went clubbing. The symbols you roll tend to match the thematic costs of cards. You can use money ($) symbols to buy materialistic crap or relationship symbols to meet new friends and whatnot. Either way you've got a new card or two in front of you that will affect your next turn(s). Roll the dice and live!

Every card you acquire has a different suit/color and it will get added to your personal tableau. You place the newest card on top of the previous card of the same color. The more of each suit you have the more points you will rack up. Cards will also give you special abilities or tokens. As long as a card remains atop a stack in your tableau it is considered active. So if you have the "Jogging" card it provides a health token. This token can be spent with your dice on every subsequent turn, for as long as the card remains active. Thematically it means that you're currently into health and fitness. So you have an extra health resource to spend as long as you're jogging. If you cover up the Jogging card with the "World Traveler" card then the health token gets replaced with the effects of the new card.

These tokens and special abilities are the crux of the entire game and help give CV a unique flavor in the realm of dice games. Some cards will give you an extra a die to roll, some provide tokens, and others will let you manipulate die results. By the time you're old you should have more options than when you were young. Well, unless you lived a crummy life!

CV's dice rolling has a subtle press your luck facet. If you roll a frown face symbol (bad luck) the die becomes locked and you cannot re-roll it. Even worse, if you roll three of them then some misfortune has befallen you. You then choose a card to remove from your tableau. Perhaps you got caught photocopying your butt-cheeks at work and got canned. It's up to you to fill in the blanks and figure out what caused you to lose the card. On the flip side if you roll three smile face symbols (good luck) then some good fortune has come your way. You can get a card from the five available without paying its cost. This adds some much needed tension and fear to the dice rolling. The more you have in life, the more you've got to lose.

When the decks are all exhausted the game will end. Each player has a secret goal card and there are also open goals that everyone can try to accomplish. These typically give you a little boost of points and I like this hidden bit of scoring. It keeps players from knowing exactly what everyone else has. Plus, it gives you a direction on how to mold your life.

Nothing you just read is ground breaking stuff. Still, I have to say that I'm surprised by how much I enjoy CV. On the surface the game doesn't seem all that special. It has very modest components and a simplistic rule-set. The actual gameplay doesn't even impress me that much. CV's trump card is its ability to weave WONDERFUL stories. It can spin such a fantastic yarn thanks to a seamless marriage of theme to its mechanics.  Every card you buy and every action you take is like a brush stroke on the canvas of your character's life.  When the game ends you can look back and there will be a story to tell and laugh about.

Astonishingly, the game gets its storytelling across organically from simply rolling the dice and acquiring or losing cards.  There are no flavor text blurbs to be found anywhere. It's up to you to piece the narrative together using the card art, cost symbols and abilities. The wonderfully, weird, artwork definitely helps. For some reason it makes me recall the cult classic PC game, Theme Hospital. It has this bizarre, cartoon style that is very capricious. If this world really existed it would be sort of horrifying. The artwork falls into the love it or hate category. I love it. It's full of WHIMSY. And I'm a whimsical kind of guy. The graphic design is also thankfully clean and easy to grasp. For a card game this is very important and CV earns top marks in this regard.

I feel many will be nonplussed with the rather basic game found within CV's box.  That's fair.  The mechanics alone don't give you a whole lot to chew on and normally that would be a death knell for a game. However, I can't stress enough how much laughter and ridiculous table chatter this game will create. CV is essentially a beer and pretzels, shooting the breeze, cracking some jokes kind of game. Winning should be secondary to the experience. Nobody should be dissecting the game for an optimal strategy.  The game being built upon the familiar foundation of Yahtzee allows the mechanics to take a backseat to the chronicling of your make believe life.  Rolling the dice and making basic decisions is enjoyable, but ultimately CV's success as a game relies upon experiencing everyone's stories. The fact that it accomplishes this with almost no text just makes it that much more impressive. In case you can't tell, MOST of my enjoyment comes from how CV sparks my imagination with its life simulation theme.

It's easy to recommend CV to storytelling or dice game aficionados. Purveyors of weird and unique games will certainly want to check it out as well.  The game plays well at all player counts and doesn't overstay its welcome.  It's lacking any sort of player interaction, but you'll hardly notice. Those looking for agonizing choices (the kind that cause you to gently caress your temples) can safely pass. If you lack a funny bone or are just a no fun, poopy pants who hates laughing you can move along.  Nothing here for you to see.

I find it fascinating that in a game called CV you score zero points for having jobs throughout your life. Sure, having a job gives you plenty of tokens that make getting other life cards easier. Those other, non-job, cards are how you score big points. For a silly little dice game it seems to have something rather profound to say about what's really important in life.

On a scale of: Broke Belligerent Hobo to Lovable Rich Fella

CV rates as a Pipe Smoking Gentleman of Leisure

Josh Look replied the topic: #212128 07 Oct 2015 19:51
This game comes across as strange to me for some reason. I can't quite put my finger on why. I also think I enjoy it. It does have an uncanny knack for generating a good time between friends. Maybe it's the art, maybe it's the die face that I like to call "poopy pants," I don't know, but I certainly had fun playing it.

Egg Shen replied the topic: #212228 09 Oct 2015 11:25
Yeah...it's hard to argue with fun. The game is beyond quirky, but I find myself laughing and having such a silly time playing it that it wins me over. I think there are a bunch of folks on this site that would get a kick out of this one.

However, I didn't mention it in the review, the game is pretty hard to get. I don't believe it has distribution in US at this time. Though, I've heard rumors that it might be coming Stateside in the near future.
Read More...