Legacy: The Duke De Something or Other 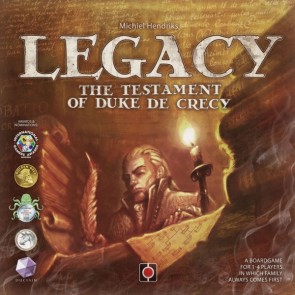 Let's try a little experiment. Right now, think of some of your acquaintances or closet friends. OK good. Now think of some people you know in your community. Now, would any of the people you just thought of improve your social status if they suddenly became part of your family? What do you mean Jeffrey huffs nail polish from the Family Dollar?

Welcome to the conundrum presented to you by Portal Games' quirky Euro about French aristocrats.  Each player will be trying to climb the social ladder in the name of honor and glory. The game takes place over three generations of a family and it's up to you to pick and choose blokes and madams to marry your offspring. Hopefully, you can pair up your daughter with someone honorable, wealthy, and who doesn't look like the Bela Lugosi after a 36 hour morphine bender.

Gameplay in Legacy: The Testament of a Mouthful consists of your standard worker placement/action selection mechanics mixed with a unique twist on tableau building. Players take turns placing their two tokens on different actions.  Everyone has a player board with a few re-usable actions (getting married, popping out babies, meeting new friends).  Then there is central board which has first come first serve actions available to everyone.  You'll go round and round, buying houses, arranging marriages, having babies, begging for money and acquiring titles.  HEY HEY!  I can FEEL you dozing off. Stay with me. Yes, the mechanics are as rudimentary as it gets, but hidden in the game's simplicity is the joy of pruning your own personal family tree. Since you start off with one head of the family card, this creates an actual family tree of cards while playing. It's a neat visual trick to see it grow while you play.

The buttery marrow of Legacy's gameplay revolves around the deck of friend cards. These cards represent other nobles in your inner circle. Each of them is a potential suitor or mate for your ever growing litter of delightfully French rag-a-muffins. As you add them to your tree they will bring victory points, money, and usually a special ability. In essence, the friend deck is a fluctuating resource of peeps and freaks that must be smartly managed. As you try to ascend the societal pecking order it's this deck of cards and how you use it that separates nobility from mere common folk.

Every time you add a new friend to your family it creates some weird narrative or laughable moment. When the son of a wealthy British scientist marries an American Revolutionist, well, folks around the table will begin to gossip. I find it becomes a sense of PRIDE to create the best damn family in France. You aren't simply trading brown cubes for gray cubes to score points. No, you're assembling the Avengers of high society! Oddly enough, this gives the game a strong sense of purpose missing from many Euro games I come across.

The entire game is steeped in historical facts, but there is some wry humor sprinkled throughout as well. Look at this excerpt from the rules: "Doctors are beginning to understand that fertility is not witchcraft but science; however, there is still a lot of trial and error. Some doctors even believe that they can ensure the gender of the child by cutting off one of the testicles. If the rumor gets out that you took part in this, your good name will be defamed!" I lost my lunch and yet…informative! A perusal of the friend deck reveals a heap of thematic cards as well as some good natured ribbing. My favorite is the hideous Angelique, who's special ability let's her have more babies than any other woman in the game. There is NO WAY this wasn't done intentionally! Hell, I will SHAME any player that let's their make-believe son marry this revolting, beast of burden. This game is about honor dammit, so feel free to get into the crusty, douche-bag nobility vibe for maximum laughs.

It's hard not to find Legacy endearing thanks to its simple to grasp gameplay that has just enough crunch to satisfy.  The game pulls off that classic Euro trick of wanting to do one more action than you're allowed.  I always like that. Hardcore Euro fans will likely turn up their noses at the inherent randomness involved with the friend deck.  They also might find the basic mechanics to be lacking.  Honestly, I think Portal mis-marketed this thing and created false expectations. Just look at that long, cumbersome, title and soak in that drab, clay-poop colored, box art. The game is practically inviting you in for a complex, tedious, three hour "appease the King" snooze fest, when it's actually a fast playing game about high class socialites being dicks.  Portal should have used the excellent caricatures on the friend cards elsewhere in the production to better promote the game's light mechanics and tone.

This is definitely my kind of Euro game. It's a beacon of hope in the murky miasma of soulless Euros that populate the market. Legacy harkens back to a simpler time, a pre-Terra Mystica time if you will. The game isn't about mastering a combination of obtuse mechanics and systems to best spew out victory points. Rather, it utilizes simplistic base mechanics and lets the friend deck and family tree/tableau building provide the depth and replay-ability. You can tell Portal put plenty of love inside the box, hell, they even included a fake letter from the titular Duke that has no in-game purpose. I love little touches like that! Despite Legacy: The Testament of a Bad Subtitle's stodgy title/box art, I believe it is a Euro game worthy of your attention. So if you dabble in Euro games and get queasy at the thought of erecting a cathedral or appeasing a king, well, you might want to track down The Duke. He's a bit demented. A simple kind of chap. Regardless, he's quick with a joke and rather pleasant overall. Plus, I'm pretty sure his fertility doctor lopped off one of his testicles. Feel free to make fun of him for it.

On a scale of Angelique the Shopkeep to Gertrude the Heiress of the Great Library: 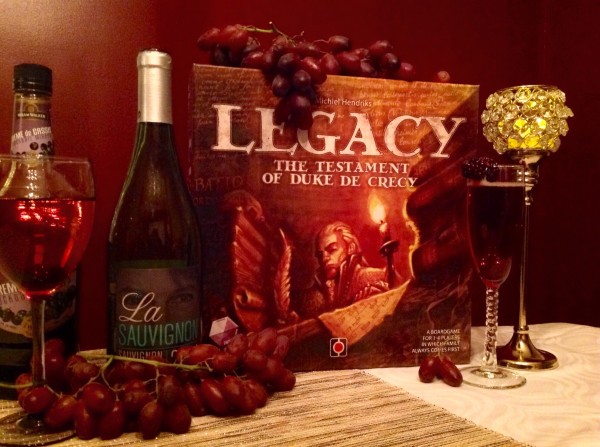 Welcome to Boardgames and Booze:

Is it possible to have a Legacy: The Testament of Duke De Crecy themed game night? It sure is. First let's start with the music. Select something classical. Try to go with a French composer like Claude Debussy. If not, no big deal. Just go with what your ears finds pleasing.

Now that the mood has been set you're going to want a themed cocktail for the evening. For Legacy I've chosen the Kir, which originated long after this games takes place, but screw it. It's French.

How to make a Kir:

Pour 4-5 Oz of wine into the glass

Garnish with a black berry

Mix it up with the Kir Royale and switch out the Wine with some Champagne. Then, go grab some powder wigs, set up the game and start marrying off your fake offspring!

I keep meaning to get this game again, actually. I love the concept. It's satirical, funny and oddly insightful. The gameplay is definitely Euro, but it does skew more toward old fashioned Euro. I love the letter in the game too, such a cool touch.

So I just found out that Portal has an expansion that is due to hit stores any time now. I guess it debuted at Essen. It looks like they learned their lesson and decided to ditch the terrible stuffy box art of the first game.

Man, talk about a difference in tone. It certainly informs a potential buyer that this might be a lighter style Euro, perhaps even one with a sense of humor. This is a good thing for me because Legacy has to be one of the hardest games to get to a table simply based on looks. People take one gander at the box and instantly determine that it looks about interesting as a bowl of cream of wheat. Damn.
Read More...