Zombiaki II - In Soviet Russia Zombies Turn into YOU! 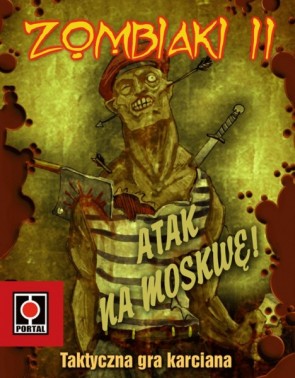 So once upon a time, way back in 2003, Ignacy Trzewiczek designed a little two player card game called Zombiaki.  To the best of my knowledge this game was never translated into English.  So after Portal Games became “kind of big deal”, Ignacy went ahead and did the Evil Dead II thing.  That is, he set about creating a half remake / half sequel called Zombiaki II: Attack on Moscow.

Zombiaki II is an asymmetrical card game where Russian zombies are trying to kill Russian humans...naturally.  You'll set up the game by placing a vertical row of cards numbered 1-5 with a cemetery and a barricade on opposite ends. Each numbered card represents a cross street that can hold three cards horizontally. This creates a 5x3 playing area where the zombies will shamble towards the humans in three distinct lanes.  The zombies will spawn from the cemetery and slowly move towards the barricade. If one single zombie breaks through, then the humans lose.

Gameplay consists of drawing four cards and then choosing three to keep.  You can play as many cards as you want, save some or discard them.  The game forcing you to ditch one card each round can lead to some brutal choices.  Knowing what cards are best in the current situation is important.  It takes playing a few games of each side to really get a feel for how to best choose your hand to play each turn.

Each side is a unique deck of 40 cards.  Not only are the decks completely different, but so is the gameplay of each side.  The zombie player’s deck is filled with zombies (duh!) and special events to help to turn the tide.  As the zombie player you’ll be adding zombies to the three lanes and doing everything in your power to get one of those undead freaks through the barricade.  Some of your unsavory tactics include using people as human shields, popping steroids to heal wounds, and you even have a special zombie or two like the big bad Mama, Matushka.  Zombies will march forward every turn and their strategy seems to be to “bum rush” the humans, but multiple plays reveal some depth to the zombie deck.  Playing the right event card at the right moment can sometimes doom the humans and seal the victory for the uncouth zombie horde.

As the humans the card play is all about dealing damage and sending the zombies back to hell.  You don’t place any humans into the three lanes.  Instead, your cards are an arsenal of guns and tactics that will maim, blow up and kill all the zombies.  Most firearms will shoot the zombie that is furthest down a lane.  On top of dealing damage if the space behind the zombie is unoccupied it will knock them back.  These knock-backs can be critical and will often be crucial to surviving another turn.  It’s a tricky little puzzle trying to figure out if it is best to kill a weak zombie or pepper a bunch of stronger ones with bullets to set up your next turn.

Turns go back and forth with each player trying to outwit and out outmaneuver the other.  If the zombie deck ever runs out then dawn has arrived and the humans win.  It’s a fast, brutal, and tense little game.  Once you understand both decks, Zombiaki II really starts to shine.  It’s like a “tit for tat” chess match with sniper rifles and chompy teeth.

The first thing that people will notice about Zombiaki II is the artwork.  It is this hideously garish, Euro-punk, comic book style that is incredibly unique.  The cards are icky, gruesome, evocative…and ugly.  But it works!  The game is also kind of laughably offensive with silly cultural jabs at both Americans and Russians.  Then there are cards with zombies smoking reefer and one card even has a peek-a-boo zombie areola!  Clearly Ignacy and Co were having fun with the zombie theme and not worrying about the PC brigade. My gut tells me most people will hate the artwork and never give this game a chance.  My gut also tells me that Drake’s Funny Bones™ are back in supermarkets and that I need buy some!

As a strictly two player game I like Zombiaki because it feels unique.  Most popular two player card games tend to be Magic the Gathering rip-offs, Battle Line derivatives, or deckbuilders.  Zombiaki II isn’t like any other two player game I own.  It has a tricky spatial element that you have to master which I like.  It also FEELS like a zombie game which is appreciated.  That shambling mass of zombies just keeps pouring out of the cemetery and it can feel very overwhelming (for the humans).  Perhaps it's greatest accomplishment is how each side is a completely different experience.  It almost feels like two games in one.

It’s not all positives though.  The game is HORRIBLY translated.  I hate to complain about rules, but it’s unavoidable in this instance.  The rules are littered with spelling mistakes and the game isn’t very clear on several things.  Heaven help you if you question what a card does.  You’ll need to hop online before your first game and straighten it out.  Also, the layout of the cards is a touch hard to read.  For instance, the zombie’s hit points are red slashes against a red background and they're difficult to make out.  So while I like the style of the cards, they sacrifice readability which is never smart.

Zombiaki II: Attack on Moscow is a clever two player card game. The game is inexpensive and won't even cost as much as a decent burger with a side of fries. Perfect for the gamer on a budget.  You will need some tokens to track wounds on the zombies, which isn't surprising given the how cheap the MSRP is. It's unfortunate that this is such a sloppy production from Portal Games.  To be honest, it feels like they found a few misplaced crates of this bizarre game and just decided to release it... warts and all.  Zombiaki II is destined to attract a niche audience thanks to it's weird art and played out zombie theme.  Still, if you play two player games as much as I do and you love horror themed games then Zombiaki II is totally worth checking out.  I'm very glad I took a chance on it.

Zombiaki II: Attack on Moscow is Lucio Fulci's City of the Living Dead 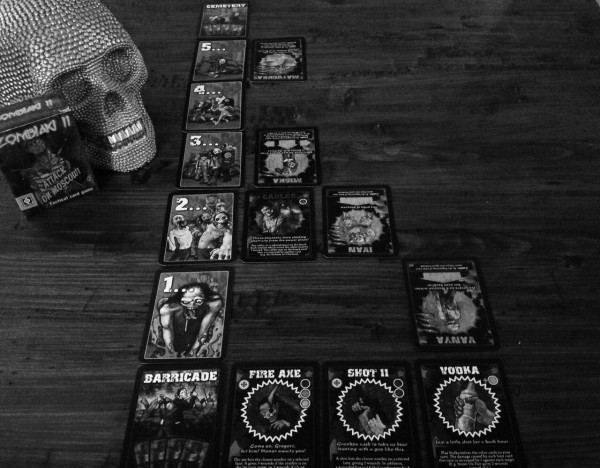 I'm going to buy a goddamn ZOMBIE game simply because it's from them.

Egg Shen replied the topic: #213881 02 Nov 2015 09:42
Mad Dog - Yeah I never understood why there was no Twinkie-esque outrage when Funny Bones disappeared from stores. I bought a pack over the weekend and I can confirm that they're still awesome.

Repo - Thanks! That dumb Scale-o-Matic probably takes me almost as long to write as the rest of the review. It takes me forever to come up with something I like!

Lego - I thought for sure you were going to be the only person on this site that had already played this game!
Read More...