Eclipse - One of the Few Worth Risking Blindness For

Game Name
Eclipse
Publisher
Asmodee Editions
There Will Be Games

I know this review is over a year late, but since Charlie Theel mentioned that I was an apologist for it, so I thought I'd make it official.

Ah, Eclipse, the first really, truly 4X game developed in analog format that is worth playing... what can I say? Oh, "Twilight Imperium 3, the king of 4X," you say? Fuck that game. That isn't 4X, it's like going to a political fundraiser.  No, that's not a real 4X game, really, because it's missing a key element: beating the shit out of one another as a core mechanic. Seriously, Asmodee made very few mistakes with Eclipse, because it is absolutely one of the best space-based board games that I've ever played. It can run a bit longer than it should with six players, but at four players, it is the perfect balance of pure white-hot aggression and intrinsically contemplative play.

I'm starting to think that the best new games are Ameurotrash™, or rather, American-European hybrid games, thanks to games like Cyclades, Mage Knight TBG, and this. Eclipse is absolutely outstanding in its strategic flexibility with regard to exploration, combat, and resource management. The variable player powers are great and perfectly balanced, although I think one of the only flaws in the game is that they took the easy way out and had several cool and unique races to choose from, but then they have a bunch of human factions that are identical in all but color. 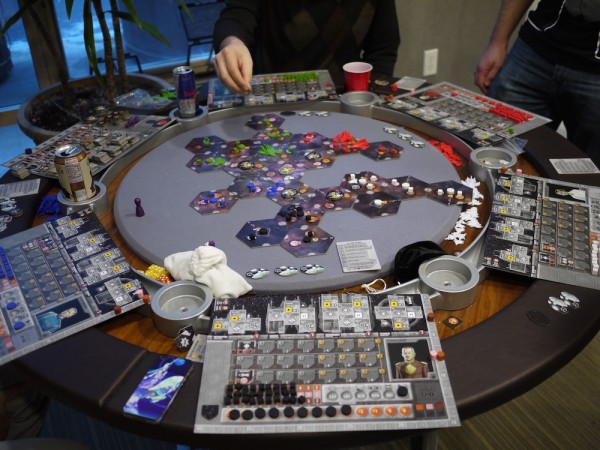 The art is beautiful, and the components are excellent as well, being colorful and attractive, aside from the players' ships which are all the same model unless you go drop a day's wages buying the "Ship Pack One" expansion that is basically just replacement ships that are all color-unique. What I think is amazing is that with as much shit as is going on in the game, they've managed to express a great deal of information in the most lightweight way, making the game very easy to learn and understand thanks to minimal but imminently understandable iconography.

Another strength is the combat system, which does use dice, and is probably the most realistic space combat board game I can think of because of the absolutely mind-bending amount of luck you need to successfully destroy any one ship with another, sans upgrades. Basically, you need to roll a six to kill an enemy ship. This can be modified up or down based on a deep and wide technology tree, but the best way to kill shit is to put more guns on ships; the hard part is that ships only have so many hard-points, and the bigger the gun, the bigger the power source required to drive it, so in order to field a bunch of big guns, you first need to research bigger power sources. On top of that, the tech tree is populated by a chit-pull system and is limited to the available chits, so if you buy that big power plant, everyone else will plot to buy up all of the weapons off the market, denying you the ability to field them. It's utterly brutal and I adore it.

If there's any weakness in Eclipse, it's that it focuses very heavily on being an efficiency engine game with a veneer of 4X, albeit a heavy veneer. What you do, and when you do it, has much more effect on your success in managing a star-faring empire than anything else. You have to gain money to take actions, and to do that, you have to take over planets that produce money, or upgrade able planets with stations that produce money. Thus, you have to be efficient in when you do things or you'll overextend your nascent civilization and die a slow death of attrition. There's a razor's-edge balance between expansion and technology development that must be realized and managed, or you're going to end up either killed off by opponents or simply end up running in circles, losing to more efficient players.

Luck also has a huge part to play in the game, because if you end up exploring tiles that don't produce money, you're kind of in a bind. You can trade minerals and research points for money, which helps you from being hobbled like this, but the exchange rate is normally three-to-one, so it's not really all that viable. To add to this, research is used to upgrade your tech, and minerals are used to build ships, so trading those commodities off for money, and by extension, action points, can really hurt you in the long-term. 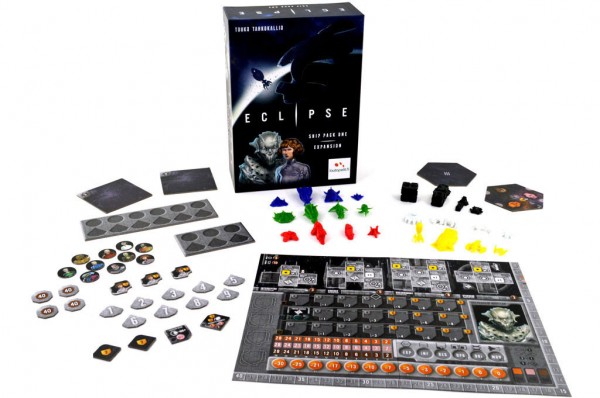 All things considered, though, this is easily the best space conquest game I've ever played. I like it far more than any iteration of Twilight Imperium, and it's much more streamlined than Starcraft. The length of the game is also much, much shorter than those games, which is an added bonus, because you literally can play two or three games in the same time that it takes to play one game of either of them. It's a great game, and while I personally love it, some of the Circus felt it was a little too dry for their tastes, and they didn't like that the ships were all the same aside from the color. I disagree that it's dry, but I do agree that it is kind of shitty to have to spend $50.00 extra dollars to get a box full of ships when they really could've just put them in the box in the first place. To be fair, it does come with some extra technologies  and some new tiles, but really, it's  all about the ships.

Finally, there's another expansion that I've played with, Rise of the Ancients, and I find that it, on balance, is not great. It takes away a lot of the player versus player combat and makes the game much more focused on exploration and economy versus true conquest. Basically, it pumps the board full of the indigenous non-player race, forcing you to spend most of the time working on killing and exploiting them versus going after opponents. I wouldn't recommend it to anyone who likes player interaction, because it diminishes it quite a bit. It's worth mentioning that there's an iOS version available for iPad only, and it's an incredible treatment of the game.

Why Eclipse Eclipses So Many Games In The Genre:
- Relatively fast-playing turns and a timer mechanic keep this from becoming a 5-hour game
- The art is very good and the components are excellent
- Loads of different strategies keep this from getting stale, even after many plays
- Lots of factions with unique powers keep the variety level high
- It's a true 4X game in every meaningful way

Why You Might Be Blinded By Eclipse:
- The ship pack expansion is a money grab; unique ships should've been included
- The efficiency engine aspect of the game can be frustrating
- Luck plays a huge role in exploration

Overall:
Eclipse is an outstanding 4X space empire game that really should be in almost every group's collection. Its blend of strategy, luck, and resource management make it a very interesting, engaging design that keeps you wanting more.

Learn more about Eclipse at the Asmodee page here: http://us.asmodee.com/ressources/jeux_versions/eclipse_2.php