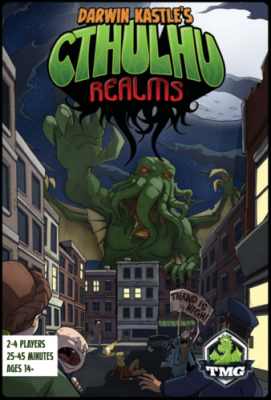 Confession time! I never played Star Realms. It was the "Little Deckbuilder That Could" and it charmed the hearts of gamers across the globe. Hell, it came very close to becoming a bon-a-fide sensation.  So the only logical thing left to do was license out the game mechanics and let someone slap Cthulhu all over it. After some extensive research (read: almost none) I've found that Cthulhu Realms shares roughly 93% of the same DNA as it's Pappy.  Basically, if you like Star Realms you can stop reading the review.  You're already going to know if you like the game or not. As for the rest of you unwashed filth, let's keep moving.

We all know how deckbuilding games work. Everyone starts off with the same deck of cards that are weak and throughout the course of the game you'll buy better ones to add to your deck. Wash, rinse, and repeat until victory conditions are met. How do you win in this particular deckbuilder? You DESTROY all other players and make them go insane. Every player starts out with fifty Sanity Points and if you ever reach zero your head explodes like you just imbibed a mixture of Coca-Cola and Pop Rocks. 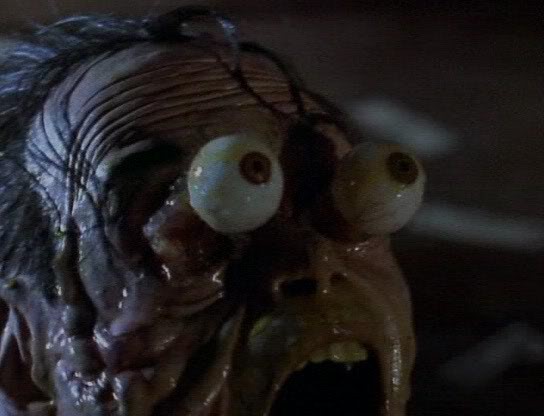 So right off the bat, Cthulhu Realms sets itself apart by being much more confrontational than most of its deckbuilding brethren. Not only is it confrontational, but it seems to pride itself on allowing players to quickly and brutally slug the crap out of each other.

Cthulhu Realms utilizes a variation of the Ascension model for acquiring cards.  This means there is a center row of cards that will refill whenever a card is purchased/removed. The minor tweak being that the draw pile is FACE UP. This way you know exactly what is coming next as if Miss Cleo used her clairvoyance to inform you of the upcoming card...minus the 99c per minute phone charge. This teeny twist turns out to be a positive revision. Sometimes a card you desperately need is staring at you from atop of the draw deck. If you buy something on your turn it will give your opponent(s) a chance to snag it. So you have weigh out if it's worth taking that chance. It adds one more brain teasing layer to peel back and chew on during your turn.

All deckbuilders have players trying to find tasty combinations like they're a crazed sous chef.  Cthuhlu Realms is no different.  Players will quickly deduce that cards of the same color/faction will typically play well with each other.  After a few plays you can suss out that green cards will do damage, yellow let you cycle/mess with the deck, and purple heals/protects, but if you dig deeper there are some cross color combos to unearth.  When you find a particularly devastating mix... oh man is it satisfying.

Unlike most deckbuilders, in Cthulhu Realms things escalate quickly. You can be dishing out Steven Seagal levels of PAIN in just a few turns. I love that. There is no boring "ramp up" phase were you waste the first few turns playing cards that are SLIGHTLY better than your starting hand. Almost every card you can buy is powerful in some way, shape or form. This is great, but it leaves little room for error. Choose a few cards that don't mesh well while your opponent gets a brutal combo... game over man. GAME OVER. This does make the game is super swingy and exciting though. Since your goal is to knock out the other players you always have a chance. I've seen some tense and exciting last minute comebacks. Let's be honest, most games of Dominion don't end with a freeze frame 1980s, John Hughes-eque fist pump to the sky.  If you have one sanity point left and you kill your last opponent with an epic twenty point ULTRA COMBO... well feel free to pump away!

What REALLY makes Cthulhu Realms tick is how it forces you to think about the order in which you play your hand of five cards. Each card has various icons that will let you perform different actions. These icons let you trash cards, cycle your deck, deal damage etc...  Cthulhu Realms messes with your sanity by toying with prerequisites to activate different abilities.  For example, many abilities will require you to have already played a specific type of card.  This makes the order you play your hand vitally important. Say you play a green colored card that gives you three points of purchasing power. Then you play a Mi-Go card afterwards. Well since you already played a green card, that fulfills a prerequisite that allows your Mi-Go to deal six damage instead of it's normal four. Then the Mi-Go has another completely different symbol/ability that if you trash the Mi-Go card out of the game you'll get three more purchasing points and then... AHHHH! Every card is seemingly like this!  Each turn feels like trying to figure out how to get all your favorite foods onto one plate at an all you can eat buffet.  You always have so many delectable options to choose from.  Do you attack or heal? Do you buy a location card that stays in front of you and provides protection or do you purchase two cheap minions whose abilities combo off each other?  Be prepared to hop back and forth between cards, hemming and hawing about how to best tentacle slap your opponent.

A big complaint people seem to voice about Cthulhu Realms is that the icons on the cards suck. Yes, the iconography is a bit cryptic and it will likely take a few games to memorize.  If you're looking to casually play the game at a local store or meetup be prepared for this.  It's not like you're trying to decipher the Necronomicon, but it requires a tiny commitment to push past it. A game takes 20-40 mins, so realistically after an hour or two you should have the symbols down pat.  I don't see this learning curve as a flaw and find it mind-blowing that some people do.  Don't pass over Cthulhu Realms because it might take longer than a few turns to understand all the icons. I'd personally rather take the time to learn this fantastic game, than play something easier to consume that winds up being much less interesting.

My genuinely blindsided adoration of this game makes me understand why folks went cuckoo over Star Realms. For a game with such a small footprint it packs a satisfying wallop!  I find that I'm usually eager to set it up for, "just one more game". You'll probably want to stick with two players, but the game accommodates three and four in a satisfying way.  I know that deckbuilders are rather passe in 2015, but don't sleep on this great redux of Star Realms.  Cthulhu Realms has smartly taken the best bits from every notable deckbuilder and flushed away the boring, unnecessary, crap.  The game is confrontational, plays fast, rewards clever play, looks marvelous, and doesn't feel like it needs expansions to flesh it out.  For me this one is a keeper, but if learning icons ruins your day then stay the fhtgan away!

Legomancer replied the topic: #215242 17 Nov 2015 12:02
I liked CR more than Star Realms, which I felt was pretty dull and repetitive. Since you can activate icons in any order (at least, that's how I was taught), I suggest having some pennies or tokens handy to track which ones you've used each round.

I will say that as tired I am of Cthulhu, I'm more tired of "wacky Cthulhu" which is what's going on here

Egg Shen replied the topic: #215249 17 Nov 2015 12:56
Yeah, you were taught correctly...you can activate the icons in any order. You can activate an icon on one card, then activate another one on the next card you play which then might fulfill a requirement for the first card...so you can go back and activate that... It can be a bit hard to track, and placing a token on a used up icon is a good idea. I always tap a card sideways when it's abilities are completely exhausted.

I don't mind the wacky Cthulhu art. I'm just thankful it's not John Kovalik's Munchkin art. Besides, once you play it a few times the artwork just fades away into the background. So I find it hard to hate.

My favourite of these games is still basic, un-expanded Star Realms. It's a tighter game, and the strict order of card ability activation feels more satisfying to me than the "anything goes" ordering of Cthulhu Realms cards.

I like both, and I keep Cthulhu Realms in my bag (because someone else always has Star Realms) but I wouldn't automatically suggest that fans of the older game would enjoy this one. It's a looser, sloppier, (be-tentacled) beast.

Egg Shen replied the topic: #215260 17 Nov 2015 15:32
It's true that you won't 100% know if you're going to like or dislike Cthulhu Realms simply based on Star Realms. However, you'll certainly be ahead of the people that come into without any prior knowledge though.

I'm coming at it from the opposite end. I had zero interest in Star Realms, but after playing CR I would like to try it now.

Also, the art on the cards made me laugh.


SuperflyTNT wrote: I've never played Star Realms either...was there racism and bigotry in it, that was removed for this iteration?

I thought it was a nod to Lovecraft and his... ummm... you know.

engineer Al wrote: I bought a copy of CR at Trashfest and just read the rules last night. I think it looks great and I can't wait to get it on the table . Maybe tonight. . .

Also, the art on the cards made me laugh.

I'd love to hear what you thought of the game if you got it to the table.

Pete - Ya, the title was me referring to our old pal Howard Philip and his unsavory personal beliefs. Nothing to do with the actual game.
Read More...