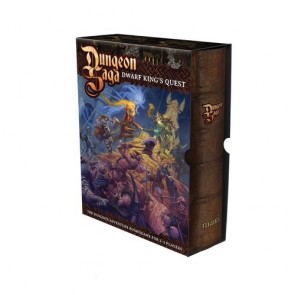 If you know your dungeon crawl games, I can give you the shortest review ever of Dungeon Saga. It's a cross between Descent and HeroQuest. It has the aesthetics and design philosophy of the latter, but incorporates the overlord versus players setup of the former. Job done.

Still here? Okay then. Dungeon Saga has one standout hallmark. It's full of smart design decisions which offer a little extra depth, a little extra theme, while keeping things as approachable as it can. That's impressive. The question is whether it's enough to make this title stand out in one of the most crowded genres in board gaming.

Let me give you an example. Fighting borrows a combat mechanic from, of all places, Risk. Each player rolls dice and compares the values sequentially, highest dice winning each pair. No great interest there. But if there's more than one model attacking you, you lose one dice for both attack and defence. If one's in your rear three squares you lose another dice for that combat.

Anyone can grasp both the rules and the logic of this. Yet this swift stroke brings a sudden element of tactical positioning to your play. In the tight corridors and irregular rooms of the dwarf king's hold it's easy to get outnumbered if you're not careful. So, players must jostle for position, watch each other's  backs, consider leaving good positions to stop someone getting surrounded. A simple combat mechanic with a tiny tweak to give you something to think about.

Here's another. In this base set, the overlord player represents a Necromancer. He has a limited number of actions every turn. Each of these can either move and attack with a minion on the board, or turn a pile of bones marker into a fresh monster which can't act that turn. Again: a simple, logical concept. Again, it creates some fun complexity. Do you trade off attacking now for the chance to get better position next turn?

There are a few other things in the bag: ranged combat and spells, doors and chests. But on the whole it's a simple package well suited for family play. However much care went in to getting maximum bang from the mechanics, there's too few rules to build major depth. Certainly nothing that can compare with the rich tactical smorgasbord of Descent.

There's no better example of this than the campaign system, or lack thereof. Heroes start each scenario with pre-determined equipment which gets better as you run through the campaign. Like everything else in the game it keeps things clean and functional, ensuring you can pick individual adventures and find them balanced. Yet it can't recreate the magic of slowly scaling the ladder of power. You already know how you'll have improved by the next scenario.

Instead all we have is a setup where adventures get 15 attempts to beat the eight adventures in the book and can earn the occasional extra dice. Yet again it's wonderfully sparse design, achieving just enough flavour from very little. But again, it offers a limited sense of continuity and may be a barrier to replay value.

Interestingly, the components follow the same pattern of making compromises to maximize value. It's got little plastic furniture pieces like doors and chests, which are magnificent. Many of the sculpts are excellent too, especially the larger zombie troll figures. The plastic they're made from isn't great, though. And the dungeons tiles themselves are thin with generic art. They don't have jigsaw ends so you can either clip them together and risk damage or lay them out and risk players knocking them askew in the excitement.

Although this is an easy game to pick up and play, it's part of a wider series. There's lot more expansions to come and a bigger, thicker set of rules. Kickstarter backers already have some of this material but I've not seen it. Part of the charm of this game is its accessibility, but it's good to know it's already got plenty of extra material for those as want it.

I like Dungeon Saga. It's such a smart, compact package, crammed with equal parts invention and nostalgia. So it's unfortunate that part of what makes it fun is also its greatest weakness. In trying to combine the best bits of other dungeon crawls it had, bizarrely, left itself short of markers to make it stand out in a crowded field.

Descent offers a more crunchy experience for hardcore gamers. The co-operative nature of the D&D Adventure System games make them better for family play. Claustrophobia has richer theme and Dungeonquest is more exciting. But Dungeon Saga is there if you feel the need to add another box of cool dungeon toys to your collection. I kind of hope you do.

July 25, 2018 (Updated: July 25, 2018)
Rating
3.0
Dungeon Saga
If you know your dungeon crawl games, I can give you the shortest review ever of Dungeon Saga. It is a cross between Descent and HeroQuest.
MT
Matt Thrower #1 Reviewer 286 reviews

drewcula replied the topic: #214523 09 Nov 2015 07:27
A good, and timely review. I'm awaiting my KS copy (I went "all-in.") Heroquest is an all time favorite, so when Mantic declared Dungeon Saga would very much be an homage - I knew I wanted to play it. I'm glad to know the mechanics add a bit more, but not so much that I still can't roll without drinking several beers. I'm bummed about the plastic and the cardboard, and others have shared complaints about these components. I've also read the graphic design is sort of weak; mediocre illustrations (or lack thereof) and an absence of significant markers to distinguish certain decks. I'm still stoked to receive my copy, but my enthusiasm has been dampened just a bit...
Read More...